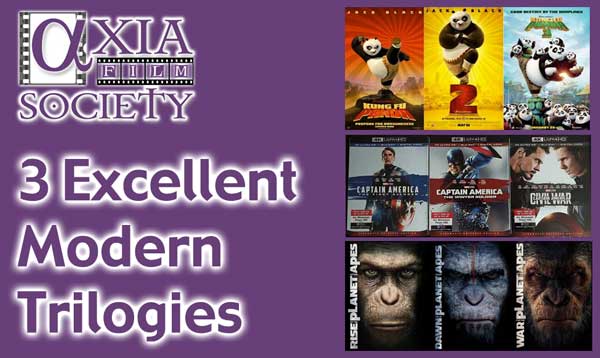 When we talk about those great trilogies of films, we tend to go back at least 10-15 years—you think of film series like the original Star Wars trilogy, the Indiana Jones trilogy, The Lord of The Rings. But, in my opinion, in my lifetime we’ve had 3 excellent trilogies. They all were made by very different studios for very different audiences but they all came out around the same time. So, for this week, I decided to go into why I think these 3 film series made excellent trilogies which were near perfect. All three of them achieved one major thing that a lot of film series don’t get right, especially nowadays, those factors being that all of their individual films were self-contained enough to each feel like a chapter of an ongoing story without having to be constantly foreshadowing sequels, and they all told an excellent story when placed together.

When it comes to the Marvel films we already know that I’ve been a very big fan of them, but the Captain America films I feel are some of the best films of that franchise. And you can’t really say that of all the Marvel film franchises that have gone on to become trilogies or have at least one sequel that all the films are perfect or all are really good. (We’ll wait until Guardians of The Galaxy 3 comes out before we put a pin in that statement.) But when it comes to the Captain America films, they all have done an excellent job, the major reason being the excellent choice in casting of Chris Evans in the lead role. He does a very good job playing the WW2 hero but an even better job being the ‘Man Out of Time’. He’s had probably some of the best character arcs across those movies, and the Captain America films have certainly built up some excellent points towards the Avengers films.

Winter Soldier is often considered by many people to be the best Marvel film for the confrontations with the Winter Soldier as its rather poignant and very timely take on the US government’s surveillance, which is something we’re still kind of living in the aftermath of are seeing more and more intrusive measures coming into our lifetime, with the rise of facial recognition software being used by rather unsavoury organisations. Civil War, however, is in my opinion the best of the trilogy because it’s a film without really having a “bad guy”. Civil War is essentially a battle of ideals where you can completely see why each person believes in what they believe in and neither of them are entirely right or wrong which is why, when the clash does inevitably happen, it’s even more of a gut-punch. And what’s more, it has some of the best action scenes. The airport scene is probably by far the best action scene in the Marvel franchise up to that point. Now, the character arc they tell, Steve Rogers would not reach its climax until Avengers: Endgame. But if it wasn’t for that, I would say you do have a complete character arc for Steve across these films. And these films really do an excellent job humanizing Captain America and asking the question: How do you bring a character like Captain America into the rather jaded 2010s? However, I think that between the directing teams that helmed these three films, they did an excellent job.

The Planet of The Apes trilogy is the main reason I’m really glad Matt Reeves got the job directing the new Batman film because if you saw the work he did on this trilogy, you knew that he can do some really great directing. I know that most people know Andy Serkis for playing Gollum but I think his performance as Caesar across these three films is actually his best performance to date and probably should have earned him a Best Actor nomination, which he sadly didn’t get. The three films in question are, of course, Dawn of The Planet of The Apes, Rise of The Planet of The Apes and War for The Planet of The Apes. And what I find amazing is, despite the fact these were billed as prequels, we never get to Planet of The Apes. There’s certainly foreshadowing for a lot of Planet of The Apes but it’s not entirely clear by the end of the franchise just how much of these circumstances that were at the beginning of that film are still in place. But what astounds me is that it does what any good prequel does: it sets the groundwork for the story its building to, and in this case it does an excellent job.

For lack of a better term, they did an excellent job humanizing the apes; their struggle feels very, very real, and it’s very hard to get you on a level where you’re kind of supporting the destruction of humanity. But, at the end of the day, The Planet of The Apes films are also, once again, not really with “good guys” or “bad guys” per se. The human aren’t all “bad guys”; the majority of the humans are good people for the first two films but there is a lot of bad influence there, and by the time we get to the second film it’s very clear that there are also some apes that want to escalate the conflict further. The franchise is ultimately kind of about the idea of how a situation—in the wrong hands—can escalate, and the circumstances that lead to inevitable but ultimately unnecessary conflict. And while these films are all kind of a gut-punch on some level or another, there’s a level of nuance that you wouldn’t expect going into these films, and while all of them individually are excellent stories, as a whole they tell an excellent overall arching story. Honestly, if they wanted to do a TV series or expand on it, I wouldn’t mind watching… Though I also think it’s maybe time to leave the franchise where it is.

You’ve probably heard me talk to death about it but I really love the Kung Fu Panda trilogy. I stand by this as Jack Black’s best performance to date and his best character, and all the films have an excellent voice cast. It does a great job balancing the comedy with the story and the animation is brilliant; I stand by that this is one of the best-looking DreamWorks Animation projects ever. It has some great villains, in the first two films at least—I wasn’t as big a fan of Kai in the third film but he’s alright, but I definitely liked Lord Shen in the second film and Tai Lung in the first. And the films have excellent messages about where unexpected potential can come from, the idea that what makes you you is the most special quality you have to give, and, of course, the idea of being able to conquer oneself before you can conquer others.

All the films really tie into one another. It would have been very easy for the writers to have Po be kind of clumsy all over again, and his skills having to be re-learnt for the other films. But no, he actually does improve throughout all these films and by the end of the third one we see his skills fully actualised as he has to train others. What’s more, I think the action scenes are great! Seriously, the people who animated this really understood martial arts and how to design characters to make those fight moves look really great. It’s no surprise that the Furious Five are animals chosen based on the fact that they are kung-fu stances: the tiger, the snake, the monkey, the mantis, and the crane. And while I’m at it, I actually think Tigress is my favourite Angelina Jolie performance, and I do not say that ironically.

I’ve actually had debates with my friends because I’m one of the people who thinks the second film is the best one, but as a whole I think this is a damn near-perfect trilogy. I commented at the time that I thought the third one was the weakest film, but even then, it’s the weakest of a great bunch and it serves as an excellent cap-off to the series. There had been several animated shorts that had filled in the middle ground, though they also kind of confused the timeline a little bit, the most major one being The Secrets of The Scroll. I much prefer the one that last I checked was available on Netflix, The Secret of The Five, which told the origin stories of all five members of the Furious Five, and it put to work some excellent 2D animation.

So there are my thoughts on three excellent modern trilogies. Got any more that you think are excellent? Let me know in the comments section.
Calvin – Nerd Consultant
Share This Post: