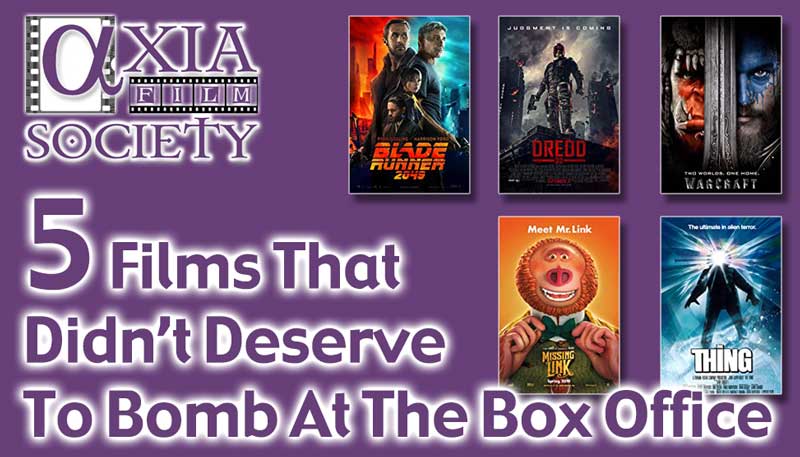 It’s a sad fact of life that any franchise or your hopes in getting a passion project off the ground can be really stifled if you don’t make money at the box office or if you don’t convince people to go and see your film. Of course, in a post-COVID world that might not be as much of a factor because presumably less people might go the cinema when they re-open out of safety concerns. Films may be held back until a lot more of the population is vaccinated in order for people to feel safe to go to the cinema and make back their budgets. As a result, film studios will be hoping not to repeat some big franchise starter failings. But, of course, there are a lot of films that didn’t succeed.

Now, there are some deserving bombs. Anyone remember the film Gods of Egypt? Be thankful when you said no because I had to sit through that film and it is trash. If you ever wanted to know what God of War would be like if it were written by morons, that’s the film for you. The following are five films that really could have been box-office successes for one reason or another but weren’t. There are a few criteria for this: it derailed any sort of prestige they could have had, it derailed a franchise potential, or it held back their creative staff for quite some time. The following are five films I liked but they didn’t do well at the box-office, and I would say in a couple of cases you absolutely should watch.

But first, for the record, here are a couple of films I was considering which didn’t make the grade:

Mad Max: Fury Road was considered because it never quite cracked no. 1. While Mad Max: Fury Road did make back a decent amount of its money and had a lot of rewards prestige, the fact it was never a no. 1 film even on opening weekend really hurt its potential, and I kind of think it deserved a bit of a boost. Let’s face it: it’s been six years and none of the follow-ups have actually happened. I also considered Power Rangers (2017), not the greatest film ever made but I think it deserved a bit more than it got and it could have probably benefitted from that to get the sequels off the ground. Obviously, now that’s not going to happen given that Saban has once again sold the rights, and now we’re getting yet another reboot. Children of Men was also considered since it seemed to turn up on a lot of lists of cinema films but I chose not to because, well, it’s not my favourite film so it’s kind of one I would rather hold back.

Now, the actual list, which will be in no particular order:

Warcraft: The Beginning should have been a success and was a major success in China; it was believed a franchise would have continued just based on the success on the Chinese market alone. However, it’s now been just under five years since the film came out and director Duncan Jones and every other person involved in the film seems to have completely gone silent about it. As a Warcraft film it’s perfectly fine and actually does a pretty good job telling some of the early stories. It does suffer from the fact that it’s a very condensed film; they had to fit in quite a lot of the backstory of the videogames into a short run-time. But it does stand that I don’t really think that any sort of sequel is going to happen—this film didn’t do very well. I actually thought this was a sure-fire success since all you’d need to do is get every single subscriber from World of Warcraft to go and see it but obviously a whole bunch of them decided to stay home, and I think they kind of missed out. Warcraft: The Beginning is not the greatest videogame movie ever made but—as a result of its box office failings—it’s definitely a beginning and nothing more.

I’m not someone who goes around hating on Sylvester Stallone’s Judge Dredd movie; I think it’s a great, cheesy 90s Sylvester Stallone film. But I freely admit it’s not really like the comics and I’m glad we now have a reboot that is essentially the comics. It has a few issues, the major one being the fact that we’re kind of all over the hype of 3D. Some of the shots also don’t work so well anymore, but as a film goes it is an excellent action film. It’s basically one massive shoot-out in a confined space but it does it very well. If you’ve ever seen that film The Raid, it’s a very similar movie, and if you like that film you’re going to love Dredd. Sadly, it didn’t do very well at the box-office and that’s a shame given it was coming out just around the height of superhero and comic movies. I think it would have benefitted a bit more had it not come out around a similar time to The Avengers. Maybe if it had come afterwards it could have been a decent alternative to Marvel, but its release timing definitely did not help it overall, and the fact it bombed at the box office means this is a solo adventure. And it’s a shame because I really like Karl Urban as Judge Dredd.

Right, I get this was never going to win on opening weekend. Everyone was really, really worried what a sequel to Blade Runner would be like but, after the word-of-mouth got out, how did hardly anyone go and see this film? Blade Runner 2049 did not make back its projected earnings and it’s a real shame because Blade Runner 2049 is the impossible: a brilliant sequel to Blade Runner! Handing the franchise to director Denis Villeneuve was one of the best decisions around—he’d just come off Arrival and did a brilliant job with this film. I can’t wait to see how his version of Dune turns out, and I think the only reason he got the gig doing Dune was because of word-of-mouth from Blade Runner rather than the actual box office. If more people had gone to see this film, he would have proven that he’s also a rating success. I would say if Dune doesn’t make a decent amount of money at the box office Villeneuve’s career could be in quite a bit of trouble in terms of pitching as a great sci-fi director to a studio since they will want to rake in the cash. And that’s a shame because he probably is the best sci-fi director working right now. He hit it out the park with both Arrival and Blade Runner 2049, and I really hope that Blade Runner 2049 is held up as a classic alongside its previous film.

I really want to know what everyone was thinking in the early 80s that this film flopped both critically and financially. It breaks my heart to see one of my all-time favourite films be considered a failure in its own time; it staggers me. I don’t know what people were expecting with John Carpenter considering he was coming off Halloween and the success he had with that but The Thing is a brilliant film. You can really tell that this film is basically a big fan putting his own spin on one of his favourite classic films, and I would say his version is superior. While it’s not incredibly close to the book adaptation it’s a really great film about paranoia and isolation, and I really recommend if you haven’t seen it to do so. The body horror is really gory but at the same time also kind of comical in a way, and, to a certain extent, quite Lovecraft-ian. The only reason The Thing is really a franchise is because of word-of-mouth years and years later, which of course led to that awful 2011 prequel, some really not great comics that attempted to be a sequel, and the terrible videogame. Now, to be fair, I say that but I don’t think The Thing would have been entirely unable to get a sequel out of but you need to have been smarter than what’s been so far, and I think if the ball had gotten rolling sooner with a more financially successful film, we might have had it better.

This one breaks my heart. Missing Link was the last film to come out from Laika Studios who made films like ParaNorman, Kubo and The Two Strings and Coraline. They are one of the few dedicated stop-motion film studios out there and they’ve done an excellent job with all of their films. I only watched Missing Link rather recently and I actually kind of like it. While it’s not their best film by far, it’s somewhat decent and I think it deserved a lot more love than it got. Laika was already not doing too well and the fact that this film’s bombed means that they could be in some serious issues and I wouldn’t be surprised if they don’t last much longer as a studio. Give Missing Link and other Laika films some love because I think the animation world is going to be much worse off with Laika not in the picture.
Calvin – Nerd Consultant
Share This Post: