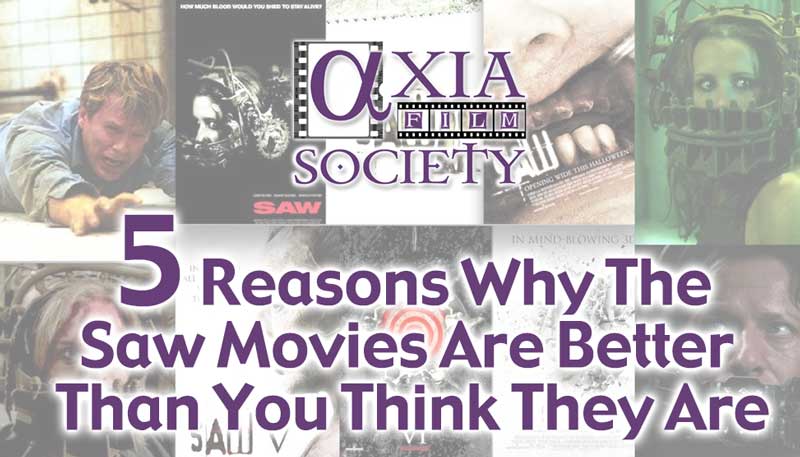 I’ve always said one of my guilty pleasures is the Saw franchise; I don’t entirely know what it is but I really like those films. The first time I watched them was on DVD, and I watched the entire series in one week. And personally, I think the films are genuinely good for the most part. I acknowledge they’re flawed films but I actually quite like them as a whole.

I’ll get some of the negatives out the way: Yes, you do have to suspend your disbelief—it does seem unbelievable that Jigsaw seems to be able to tell everything that’s going to happen almost perfectly when one person acting out a character could stop the whole plan in its tracks. And, yeah, not all of them stick. A few weeks ago I did my unpopular opinions and one of them was that there are only two bad Saw films, which I stand by. Saw: The Final Chapter is a pretty bad way to close what could have been the conclusion to the series, and Jigsaw didn’t really help things. Though I’d say, whereas Saw: The Final Chapter is a pretty bad film, Jigsaw is more of a mediocre film that edges towards being bad. Now obviously I have to talk about six films here and I won’t get through everything about them, but—fair warning now—there will be spoilers from here on out.

So, here are five reasons why the Saw movies are better than you think:

If there’s one thing that’s really nailed it’s the character of Jigsaw. We don’t really find out much about him in the first film, but that’s okay—it’s not necessary. But when we do get to learn more about him, he actually becomes a really interesting and fascinating character. Unlike most horror movie villains, he’s a very meticulous planner. He doesn’t really act out of impulse, and instead of being obsessed with death he’s obsessed with life itself; he wants people to appreciate the life that they have. But—in his completely warped philosophy—if they can’t, he believes they don’t deserve that life. Now, this stemmed from the plot-twist in the first film that he’s a cancer survivor given a terminal diagnosis who survived a suicidal car crash, and then hoped to pass on that appreciation for life that he gained to others. But he also has this sense of being a guiding figure, hence why he takes on so many apprentices as the films go on. You can really tell that Jigsaw is genuinely clever and on some level understands human psychology in a very meticulous way, and that’s what makes him a rather terrifying villain, even after he’s really not playing as director role in the plot after Saw 3.

Granted, the Saw franchise did really lead to a rise in some terrible torture-porn films that, thankfully, it seems the horror genre is finally moving away from. But, as I said last time I talked about the Saw films, you only have yourselves to blame for this one—the increase in traps and gore was due to public demand. But the traps themselves really say something about each of their victims; they are meticulously designed to each person’s personality. They almost become living embodiments of wasted potential or taking things for granted. You have to ask yourself the question: How far would I go in one of these traps? Would you attempt it or would you just give up? It’s actually kind of surprising that—I’m pretty sure—virtually no one just gives up and resigns themselves to their fate in these films. There’s also some really creative designs like the pendulum trap, and I particularly like the shotgun trap in Saw 6 for the health insurance broker even though it’s a bit on-the-nose. There’s an interesting trap in one of the films that’s directed at a chain smoker which involves him having to hold his breath in order to survive. And, of course, there’s the famous Venus flytrap which became a signature of the franchise. And who could forget the bear trap on the face? True, this is a bit gratuitous and, again, you have to suspend your disbelief that this city has so many abandoned warehouses for Jigsaw to be designing these trap rooms. But you’ve got to like those designs.

Yeah, that’s a real rarity in a lot of horror franchises; I’ve noticed a lot of them just carry on as if not much changed between films. Say what you like about the Friday the 13th franchise but those films don’t meticulously go one into the other despite the fact their chronology is very easy to fathom, and, hell, Nightmare of Elm Street kind of gave up on its running plotline by the time it got to part 6. If you actually wanted to know what happened to the characters after part 5 you had to read various comic series. Saw, on the other hand, did have a very simple and effective chronology—all the films take place either hours, days or just weeks after the previous one, the only real exception being Saw into Saw II which implies that quite a few months have passed. As a result, these films together feel like one big story. I really appreciated it; it was the real hook at the end of the day. Saw, I’ve always said, feels more like a thriller than it does a horror franchise, and I really like the flow of each of these films going one into the other.

There are a few exceptions to this but there’s always at least one person in a Saw film who you want to get out. Most of them don’t feel like they’re entirely bad people, just more that they’ve made a mistake. Again, there are obvious exceptions to this rule: I would dare say the twist surrounding one of the main victims of the most recent film, Jigsaw, can officially go die in a fire for what she did (which I’ve just realised is a poor choice of words considering how one of the victims died in Saw VII). But I actually really found myself rooting for some of the people who get out alive; you can really believe they would appreciate what they had afterwards. And, of course, some can get out—Jigsaw always sets up his traps so there’s a possibility of someone getting out alive. He doesn’t really want to kill anyone, he just wants them to appreciate their life… He’s just going about it in the most screwed-up way possible. But I do like the fact that these films do give you likable characters to root for, albeit ones that are flawed. I think that’s definitely something that’s trickled down to other horror films in recent memory.

I say usually because that was one of the big problems with The Final Chapter, and even more so in Jigsaw. Big spoilers from here on out, I’m going to absolutely spoil the twists of most of these films. Now, I really recommend a YouTube channel called ‘Overly Sarcastic Productions’, and they do a series called ‘Trope Talk’ where they go over various film, TV and literature tropes and explain them: why they work, why they don’t work, and some good examples of both. Now, they define a bad plot-twist as one that contradicts things that we already knew in a way that doesn’t make any sense and, once again, contradicts things that were established previously, that it’s not as clever as it thinks, and it actually makes the plotline worse than if they had not included the plot-twist. The first six Saw films do not have that.

The first film actually has an ingenious plot-twist: you’re led to believe several things are the case, but if you’d paid attention to the lines of dialogue throughout the film you could probably guess it. In fact, it makes re-watches very much worth it as it’s where we fully learn a lot about Jigsaw’s backstory. The second film’s twist proves Jigsaw’s influence is growing with the multiple-time victim Amanda who is revealed to be his first apprentice, which really expands what they can do with the series going forwards. The third one actually has multiple twists leading up to Jigsaw’s death after he finally succumbs and surprises you in the sense of how he died and what exactly is meant by that particular game that he ran; his choice of players become even more evident. Saw IV even does an excellent reveal of implying that it is taking place after the events of Saw III but then throws a curveball by revealing at the end it’s actually taking place at the same time as Saw III and ties directly into that film, which reveals that the new Jigsaw apprentice is one of the detectives who’s been following the case throughout, and he makes for an excellent new villain. Part 5 and 6 show just how evil he truly is and how he doesn’t value Jigsaw’s plans.

Part 6 though is one of my favourite twists. You go throughout the film thinking it’s going one particular way. Essentially, the game is set around a health insurance broker who’s come up with a system on who can and can’t access health insurance based on his plan. Incidentally, it’s the one that denied Jigsaw the cancer treatment which could have saved him. (And when you realise just how many people screwed Jigsaw over after his cancer diagnosis, you’ve got really feel for the guy—he had so many opportunities to be saved and it didn’t work.) You believe he’s running to get his family, and we see a mother and son throughout most of the film with a lever saying ‘Live or Die’. However, when we finally get to that stage, they are not his family but the family of one of the men he denied insurance to who later died. Again, a bit on-the-nose political commentary on America’s healthcare system. Setting a horror film about that would have been very difficult but very much worth it, and I think Saw VI kind of pulls it off. I actually won’t spoil how that ends but, believe me, it’s a really interesting ending. Albeit not the most satisfying one; I actually think they made the wrong decision at the end of the film.
With these 5 points, I hope I have convinced you that the Saw films might be a bit better than what they’re given credit for. There are a few more things I could have gone into but those were really the points I wanted to make. Honestly, the franchise is worth a re-watch once you can, especially if you’re aware of the plot-twists.
Calvin – Nerd Consultant
Share This Post: