A Beautiful Day in The Neighborhood – Review 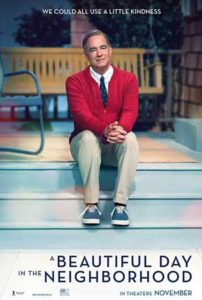 “A BEAUTIFUL DAY IN THE NEIGHBORHOOD”

A Beautiful Day In The Neighborhood is one of those films that you see coming around around this time that are basically made from a bunch of films that are intended to be awards contenders. A Beautiful Day In The Neighborhood has probably not turned out as well as they’d hope in that regard since it’s only received one Oscar nomination this year, that being best supporting actor for Tom Hanks, this being now his sixth nomination.

The film itself has been directed by Marielle Heller, an actress turned director who has directed Diary of a Teenage Girl as well as Can You Ever Forgive Me?, a film which I was genuinely surprised at how enjoyable I found it, and also earned its lead actress an Oscar nomination.

A Beautiful Day In The Neighborhood is inspired by an article in a November 1998 addition of Esquire magazine written by Tom Junod, though for the purposes of this film, it’s a very heavily dramatised version of that story and his friendship with children’s entertainer Fred Rogers who’s played in the film by Tom Hanks. In this case, the journalist has changed to Lloyd Vogel, played by Matthew Rhys, who, through his friendship with Mr. Rogers, comes to terms with his own personal issues and aims to improve his life as a result. So once again this is a heavily dramatised bio-pic, but from what I’ve heard, it’s somewhat accurate to the actual friendship between Fred Rogers and Tom Junod. The film itself is actually rather interesting, its story structure and much of the early narration comes from it being essentially a grown-up version of a Mr. Rogers story. We get a full introduction like on the show and even a segment that actually mirrors what you would expect, and many of the transitional shots involving vehicles are done with the same stop-motion animation and cardboard cutouts that would be within the show. To further extend that, the aspect ratio of the film changes for several shots. I think some people might find the fact that the film goes from being HD to a more condensed visual style to replicate the late 90s a bit jarring, but I think you can get used to it after a while.

But the film also involves itself being a massive nostalgia trip for many people, however I think the nostalgia is going to be way more there for an American audience. Let’s face it, this is a very American film in spite of the fact that Lloyd is the main character and is played by Welsh-born Matthew Rhys, who by the way does a really good American accent for this film. Fred Rogers was an American celebrity and it was a very American show, I don’t recall it actually being broadcast much in the UK. But because we’re living in the of the internet, many of us are very aware of how important the show was. The film does a good job actually going through not only the philosophy of Fred Rogers but also the direction the show took and the fact that it believed children could handle heavy subjects and that they deserved to have those subjects tackled. Many people like to try to pick holes in Mr. Rogers but from what I gather, he was a genuinely good guy and much of his real-life philosophy made its way into his form of entertainment.

And while I’m at it, when I heard Tom Hanks had been cast in the role, I thought that was perfect casting – you get the nicest man in Hollywood to play one of the nicest children’s entertainers that ever existed. I think it was just a perfect decision. It is kind of distracting that Tom Hanks is in the role and at times it feels like it is just Tom Hanks doing a Mr. Rogers impression, but he does really embody that persona. If anything, you definitely get a sense that he must have viewed a lot of material from the archives for that show. I must be honest however, this film does feel a bit overly melodramatic at times, but I actually think it does a decent job all things considered. It has one of the weirdest and on-the-nose dream sequences, but I won’t give away too much what happens in it. I will just say however that the acting overall does a pretty good job and when it fails, it’s more down to the fact that a couple of scenes tend to be a bit too overdramatised. I’ve actually been a bit coy because I don’t want to give away spoilers since the film’s trailer actually does a very good job of telling you what the film’s about without giving too much away, and I want to keep that mystique there.

Honestly, I actually found myself enjoying this film. In spite of all its little flaws, I actually found myself warming up to it. I think because, at the end of the day, the message of the film is just simply to talk to one another and don’t be afraid to say that you’re not perfect and you need help. Also, at the beginning of the film they even state it’s a story of forgiveness and how hard it can be to forgive someone, something that we’ve all been guilty of. A Beautiful Day In The Neighborhood is not a perfect film and occasionally can be a bit too melodramatic but it’s also a very honest and earnest film. I found it being at the end of the day just a nice film with a nice message, which in a sense means that it embodies its subject matter. There are two excellent central performances from Tom Hanks and Matthew Rhys, and the direction of the film, whilst occasionally trips them up, does do a decent job. I think the editing of the film might put a few people off but overall, I actually thought this film was really nice and enjoyable. If you haven’t seen it yet, this might be one to check out.

Well, that’s it for me for another week. Next week, I’m back with a film that’s probably going to give me even more to talk about as I’m watching another DC film with the release of Birds of Prey. With all that being said, thanks for reading this review. I hope you enjoyed reading it as much as I enjoyed writing it.
Calvin – Nerd Consultant
Share This Post: