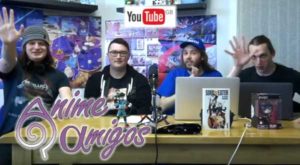 We ounce again pay tribute to Screen Junkies by doing our version of Movie Fights with an Anime twist
05:00 Round 1: Who should direct a live action adaptation of Gundam
13:07 Round 2: What’s the best example of a bad OP to a good show
21:58 Round 3: What’s the best example of a good OP to a bad show
29:08 Round 4: WhichAnime needs a reboot now
39:34 Round 5: Who are the best written romantic couple in Anime
(spoilers for Ouran High School Host Club, Rascal Does Not Dream of
Bunny Girl Sendai and Eureka Seven)
49:24 Round 6: What was the biggest mistake of the Crunchyroll awards this year
56:04 Round 7: which Anime ended far too soon (also Ren Rants about Bleach)
1:07:54 our thoughts on the Ani Trendz award nominations so far
Share This Post: