Ant-Man and the Wasp – Review 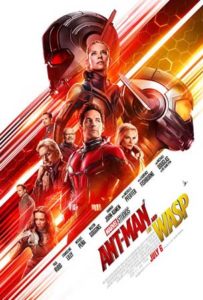 “ANT-MAN AND THE WASP”

So, after the juggernaut that was Avengers Infinity War it feels rather much a downgrade to suddenly be heading into another Ant-Man film, but we’ve got it here now.

I was actually a big fan of the first Ant-Man film, you can see my review on the site if you want more clarification of that. I haven’t actually lowered my opinion on the Ant-Man film but a few years later I am definitely saying that it’s one of the filler Marvel movies. The only problem I have with Ant-Man is that it really doesn’t warrant a repeat viewing, it’s not really that important in terms of the Marvel films. It was un-ignorable seeing as the film had swapped directors half way through filming. This time there is no such issue.

Peyton Reed who took over from Edgar Wright returns to direct it, however unlike those films Edgar Wright or Joe Cornish weren’t there to paint the script. Peyton did not write any of the script, it was all down to Chris Mckenna, Erik Sommers, Andrew Barrer, Gabriel Ferrari and even Paul Rudd once again. That should tell you everything of how much of a studio man date this film is. They have five credited writers, by all accounts this film should be a jumbled mess. Surprisingly it isn’t.

Ant-Man and the Wasp is more of a follow up to Captain America Civil War. Scott Lang (played by Paull Rudd), is now under house arrest due to his actions at the end of that movie, which is rather surprising as I assumed he had just broke out with all the other guys, but I’m guessing, he stayed behind and has now done a plea agreement. However, he begins to see visions of the original Wasp- Janet Van Dyne (played by Michelle Pfeiffer) and contacts Dr Hank Pym (played by Michael Douglas) as well as Hope Van Dyne (played by Evangeline Lilly), informing them of his visions, believing they can get Janet back and that she is still alive. However, there is an issue, not only are they being dealt with by a tech dealer- Sonny Burch, (played by Walton Goggins), they’ve also got another tech-based villain after the technology named Ghost, (played by Hannah John-Kamen), who wants it for her own reasoning. You got all that? Good… it’s very simple despite the fact there is a tonne going on.

Most of the cast return, but a lot of their roles are down played including Scott Lang, his ex-wife and his daughter and her new step-father, which is rather surprising. We are going to have to wait a bit for Cassie to grow up for the supposedly planned young Avengers movie. Trust me if the predicted failure of the Teen Titans series is anything to go on, that film is NOT happening.

Marvel is under a lot of controversy right now, given the situation with James Gunn, which by the way is a very stupid decision by all parties involved, if they all just got together and talked about it, we would get a solution. So, they were probably hoping for this film to be a massive success. Sadly, I think after Infinity War this won’t be a success, down to the fact that people are really fatigued, especially considering the quality of super hero films this year such as Infinity War and also Black Panther. This film simply doesn’t measure up to them.

Ant-Man and the Wasp however is not a bad film by any measures, its actually pretty damn good. In fact, in several areas I can say it is actually better than the first one. The first film spent so much time on the origin story and planning the heist, there is not actually much time to show off Ant-Man. This film cuts the mustard and gets straight to it. The problem is that it’s actually rather lacking in certain areas. We get two Marvel villains this time, including, Sonny Burch- a regular street level Marvel villain, who remains mostly intact from his comic counterpart. However again the Ant-Man movies are more overtly comedic than the other Marvel movies, he is more treated as being a comic relief villain.

What’s more they have Ghost in this movie, while Sonny may not be a very strong villain, Ghost is a pretty strong villain overall. Her motivations are very believable, she actually has a much more personal reason, and her events tie into the Marvel cinematic universe. The only thing I would say is that she feels slightly under-developed in certain areas, they fortunately avoid a terrible cliché.

The films set piece is also worked by the fact that the technology actually allows Scott to grow as we saw in Captain America civil war, so there is a lot more to play on with that. A scene by the Hudson river which can be seen on the trailers is a prime example of that.

The thing is this film actually has to introduce the Wasp. Who again not actually a very important, despite the fact that in the comics she was a founding Avenger. The Wasp is actually rather well handled. Hope Van Dyne was a pretty good character in the first one, but she was just there to be sort of a trainer and do a few action scenes. As we saw in the post credit scene of that movie, Hank Pym actually developed a suit for her to become the Wasp, and in this film, we actually see that intact. I’m going to actually say the costume may have been redesigned from that movie, but THANK YOU! Seriously, this costume is way better. Evangeline Lilly once again reprises her role and she actually does a damn good job of it. She has much of the character perks and has some good chemistry with Paul Rudd without knowing the situation.

Paul Rudd is once again excellent in this role. He has definitely developed the character in a certain way, and has some very good play offs with the other characters. Once again, his ex-convict buddies are in the film, most noticeably Luis, played by Michael Peña, who has a slightly expanded role from the first film. Once again this will be one of the few films where Michael Peña isn’t playing a total Jackass. The fact that he has this steady gig is the only reason of why he shouldn’t fire his agent for not recognising terrible scripts.

Laurence Fishburne also finally joins the MCU making him the first actor to directly be in the current DC cinematic universe and the Marvel cinematic universe, which makes me think those contracts are not as binding as first thought, or… DC might be done with superman’s set of characters. He’s actually quite good in his role, even if it seems rather inconsequential to have an actor like Fusburne in a role this minimal. I would have thought if you were getting him in you would at least put him in a super villain role.

Look, this film is very much the Marvel formula to a T. There is very little you are not going to be aware of. Everything you expect from the Marvel formula is present, and it just works. The action scenes are expertly done using the size changing gimmick to its best degree. Prime example is a three-way car chase towards the end of the film, which shows the film at its best. I reckon the 3D in this film is pretty good, so if you get the chance to go and see it I would recommend this, despite the fact I saw the film in 2D.

Ant-Man and the Wasp is a prime example of the Marvel formula and how it works, but it kind of falls short to the juggernauts Black Panther and Infinity War. However, if released another year this would have made it to best Marvel film of the year. The film has an excellent plot which actually does evolve from the first film, and should defiantly be seen by fans of the Marvel Universe and fans of the previous film. It is also propped up by the amazing performances from Evangeline Lilly and Paul Rudd. As well as an expertly done role by Michael Douglas who finally gets a much more expansive role.

If you do go and see the film make sure you stay for the credits. There is a mid-credit and post credit scene which both tie into Avengers Infinity War. You’ve probably seen what’s coming by that sentence alone.

Well that’s it for this week. Next week I will be talking about the latest Disney live action film with Christopher Robin. With all that being said I hope you’ve enjoyed reading this review as much as I’ve enjoyed writing it.
Calvin – Nerd Consultant
Share This Post: