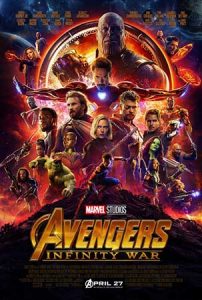 Avengers Infinity War is the culmination of ten years of the Marvel Cinematic Universe, so may films leading to this one, each one bigging up a different Infinity Stone. Now, Weedon was meant to be directing this film originally, however, Joss Weedon left after the Age of Ultron left him feeling cold on the subject and Captain America Winter Soldier and Civil War directors, the Russo brothers were brought on to replace him. Considering how well both of those films turned out, I was very excited to hear that they were going to be directing the film and what’s more, we have a ton of cast members. The trailers have bigged up just how many cast members there are to a T, seeming like it is going to be a massive event. But enough stalling, how did it turn out?

Avengers Infinity War is going to be one of my shortest reviews in theory, because the trailers really don’t give away too much and there is so much going on in Infinity War that I really, really, do not want to give away any spoilers. Not even in a minor way. So, everything in this review is probably going to be very vague.

The plot synopsis is fairly simple. Thanos, who is played by Josh Brolin wishes to get all six Infinity Stones, finally being built up in all the post-credit scenes in all the Marvel films previously. Now the Infinity Stones each control one aspect of the Universe and if he has the power of all six, he can wipe out half the life in the Universe, thus, pretty much all the Marvel Superhero’s come together for one final charge.

OK, you are probably thinking that with such a large cast, including pretty much all the Avengers from the first film, bar Hawkeye, which feels very missing in the film, all the Guardians of the Galaxy and multiple new hero’s that haven’t been involved in cross-overs returning in this film, including the supporting cast for all of those, you are probably thinking that a few characters get the shaft, far from it!! Everyone gets something to do and no one feels wasted. The Russo brothers really got the hang of this in Civil War and they replicated that with Infinity War. Now, obviously, we know the locations of all the Stones because most of them were revealed in previous films. For example, the last two Avengers films gave away that Loki had one, one of them was revealed in Guardians of the Galaxy, which Thanos sort of got off screen, so god knows what happened there, we know one is in the Vision, Dr Strange has another one, so on and so forth. The problem is that there are a couple of Stones that have not had their locations revealed and the Soul Stone had been particularly allusive with several fan theories about its location and who would possess it at the beginning of this film were persisting. The actual answer to this is both shocking and at least one of the films best moments and in a film full of great moments, that is saying a lot.

I don’t want to go into too many of the performances since I don’t want to reveal too much about which cast members are in the film, who aren’t and a few of the surprises. But let’s just say the performances are all excellent, the Russo brothers direction really suits them. But by far the stand out in the film is Thanos. Thanos will be the MCU villain that no one will complain about. He is an imposing figure and Josh Brolin brings everything about this character to the forefront. I actually wondered if Brolin would be able to deliver everything with this character, but he managed it quite well. I think if anything, I kind of prefer this version of the character to his comic counterpart. Very much of his comic origin in changed for the MCU version, but the character is mostly still intact. Those who have read the event comic Infinity Gauntlet, which is the most famous storyline to involve the character, might be a bit surprised about how many changes have been made. Thanos, however, joins the list of the great MCU villains, because his presence is felt constantly and you genuinely don’t know if it is possible to beat him, but at the same time he doesn’t look unbeatable.

One of the things I also liked about the film is the fact that the film gives some interesting character combinations. One of which leads to new cast member, Peter Dinklage in a rather funny scene. But believe me, the film is full of surprises like that and it certainly feels like this is the final stand. The fact of the matter is though, the film is very complex in how it treats you, with some genuinely great moments, a ton of great action scenes, seriously, the Russo brothers are some of the best directors when it comes to doing action scenes for Superhero’s and an ending that will leave many people with very mixed emotions.

Infinity War, as a result, is one of the best Marvel movies to date and it is seriously staggering that they were able to pull it off. It does feel like everything is aligned in the correct place and what I thought was going to work, but had a few downsides to it, has been pulled off miraculously. This is the Infinity War every fan deserved. The effects are great, the action scenes are amazing, the characterisation is phenomenally well done and the build-up was worth the pay off.

Infinity War is the film you need to see and you need to see it on a cinema screen, and considering how well it turns out, I’ll be very anxiously waiting to see if they can top it with Avengers 4 next year.

The Marvel Cinematic Universe will return later this year with Batman and the Wasp, which will be rather interesting considering how this film ends and we will have one more film prior to Avengers 4 with Captain Marvel. I reckon you should see both films that build up to Avengers 4 since I think both will tie into that film, without giving too much away. Oh, and stick around for the credits, because there is a post-credit scene, though only one at the very end which sets up some of the future films.

Thanks a lot for reading my review. I hope you have enjoyed reading it as much as I have enjoyed writing it and if you are still reading it having not watched Infinity War yet, GO NOW, this is seriously the event of a generation.
Calvin – Nerd Consultant
Share This Post: