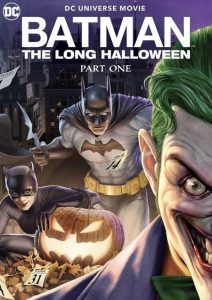 Well, there wasn’t anything in cinemas this week so I decided to finally get round to reviewing the DC animated film I’ve been most anticipating for this year, Batman: The Long Halloween which was released in two parts over the summer. The Long Halloween is one of the most accredited comics in DC’s history. Written by Jeph Loeb with art by Tim Sale, the two created a very interesting Batman story within their own continuity. And it proved so successful it even got sequels, though they were not so great. Marvel even poached them to do their own selection with Hulk: Gray, Daredevil: Yellow and Spiderman: Blue, all of which were not amazing, though I would really recommend Spiderman: Blue—that’s actually one of my favourite Spiderman comics.

Now, going into this film I could do a plot synopsis but it’s actually quite hard to, not that there isn’t an underlying plot—there is—but there are also a lot of mini stories going on and I think a plot synopsis wouldn’t do it justice. The basic premise is that the story takes place over the course of a year from one Halloween to another and involves Batman, Jim Gordon and Harvey Dent investigating a series of murders against the Falcone family and their associates, with each murder taking place on a holiday, hence the killer being nicknamed ‘The Holiday Killer’. That’s a very brief synopsis of the film but there is a lot going on here. For one thing, that sounds like it would take up the bulk of the plot, but because this is a very loyal adaptation of the comic it’s more in the background. The murder mystery doesn’t even really get close to being solved until you’re a large way through part two. Now, it definitely puts it in a little more focus than the comic did; the comics just kind of treated it as a bit of a backdrop. Each of the twelve chapters were named after each of the holidays in question with not much interim between and the film actually does a pretty good job recreating the iconic covers. Obviously, a few things were cut or changed, though, as I said, this is a very loyal adaptation, hence why it’s in two parts—you essentially are adapting twelve longer-than-usual issues. An hour and a half film is not going to do that justice. I chose not to watch it in one three-hour stint, instead watching them over a weekend one day after the other. And while I think you’re perfectly able to follow the story, I would not recommend having a long gap between the two.

There are tons of subplots around Carmine Falcon’s succession and there’s a fracturing relationship between Harvey Dent and his wife Gilda, and there are also Batman villains committing tons of crimes. However, without going into too many spoilers, they more serve as their own subplots. There’s a lot going on though—the comic features a ton of villains and I don’t think any of them were cut. Most of the bigger ones are here; I think the only one that’s missing in any capacity is The Riddler. There’s a few of which you wonder why they bothered to show up: the Penguin is barely in this thing and could have easily been cut, and what’s rather strange is the Mad Hatter actually has more to do in this film than he did in the comic. It probably helps that he’s played by John DiMaggio.

Speaking of which, the casting is also excellent. One of the things I found interesting about the voice cast that was put together for this film in particular was that many of them sound very similar to actors from Batman: The Animated Series. For example, Josh Duhamel’s Harvey Dent sounds remarkably like Richard Moll at times who voiced the character; Troy Baker has proven over a few performances that he’s probably the closest Joker to sound like Mark Hamill and does very well in the role; and Billy Burke actually might be one of my favourite actors to play Jim Gordon after this. He really does sound right for the role and he’s probably one of my favourite casting choices since Bryan Cranston played him in Batman: Year One. Same would go for the sadly late Naya Rivera as Catman who the film is dedicated to. Obviously, you have to have a good act to play Batman, and in this case we’ve got Jensen Ackles who you may recognise from playing Dean in Supernatural. I personally was kind of weirded out when he was cast for the role but I think he actually plays it brilliantly. The direction given to him was to sound like Kevin Conroy and you really feel like he’s channeling him for this performance, and if you were going to have him replicate anyone’s performances, Kevin Conroy was the right choice. I really liked him as Batman; it’s just kind of interesting that because The Long Halloween has to deal with so many subplots, Batman goes long periods not being the focus.

Dialogue in The Long Halloween is also great which works out very well considering that every actor is giving great performances. The one thing I was concerned about was Calendar Man being brought in considering how big of a role he plays in the story. David Dastmalchian is in the role and he is good but he’s basically been to do a bit of a Hannibal Lector impression, which isn’t surprising considering this version of the character was kind of inspired by Anthony Hopkin’s performance in Silence of The Lambs. Despite the fact that it is obvious what they’re pastiching, he does give a good performance and I liked the interactions between him and Batman. They also did a very good job with the action scenes; a particular highlight would be a plane fight between Batman and Joker.

If there’s one thing that kind of bothers me about The Long Halloween in hindsight, it’s that while the answer to solve the murder mystery is there and you can guess it properly, you can’t really guess the why. I actually found when we solved that one there was a lot more revealed to us in the last few minutes of the film than there was in the story preceding it. Now, that is true in the comic so they were kind of tied over with that issue, and in fact I actually felt that this one did a better job than the comic in the sense that it actually gave a bit more closure than the comic does. The comic certainly ends with everything wrapped up but it also had a very different feel as far as an ending goes. I feel like the writers and directors were not too happy with the ending of The Long Halloween and tried to tack on an extra ending, maybe to give it more of a sense of completion or a different tone considering it’s a little more hopeful than the comic’s ending was. But I definitely think a few people are going to say that the ending comes a little out of nowhere. Though, as I said, the clues are there if you look hard enough.

The only thing I really haven’t commented on is the animation. Now, since this isn’t tying into DC’s animated universe it means that they can do what they normally do when they’re adapting one of their famous comics to an animated film and actually replicate the artist’s art style for the animation. Now, in this case they had to replicate Tim Sale’s art which is not the easiest thing to do, not because Tim Sale is a bad artist—far from it, he’s really good—but it’s very hard to describe his art style. Abstract would be not the right word, but with each of his works he definitely goes with something very unique. In the case of The Long Halloween it’s quite pointy but it’s also designed to replicate a noir. The big difference is that they have to fill a lot of empty skies and backgrounds that were often there to create a sense of isolation since this Gotham is way more populated than it was in the comics. I personally felt that they did a very good job replicating the style; it doesn’t feel like it comes straight out of the comic but it definitely feels like the comics were used as a storyboard. Personally, I actually thought the animators were given a hard task and did a very good job all things considered.

If there’s one thing I think people might come away not too happy about it’s the fact that Batman is not a large focus of the story; at times he feels like a secondary character in a Harvey Dent film. Though, personally, I kind of like that—I quite like these Batman stories that aren’t really about Batman per se. And, if anything, one of the reasons I like The Long Halloween so much is that it’s a very well-done personal story about the people surrounded by Batman and I think the film captured that very well. Batman: The Long Halloween Part One and Two are very loyal adaptations of their comics and do a great job transferring that to the screen. There is so much going on in the story that I don’t think my review has done it justice. I really would recommend seeing it, especially if you’ve read the comic since you can go into it seeing the sheer amount of love and care that was put into transferring it to another medium. I thought there was never going to be a Long Halloween adaptation considering how narratively it doesn’t really suit a three-act structure, though the writers did a fantastic job adapting it for that. It’s another great character piece and, like the comic, it doesn’t feel like any character is wasted. I would say this is a real must for Batman fans.
Calvin – Nerd Consultant
Share This Post: