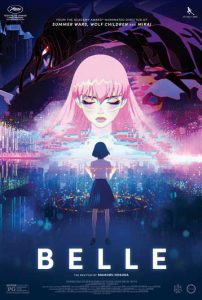 Belle is the latest film written and directed by Mamoru Hosoda, of whose works I have written about extensively in my book and I’ve even covered two of his films on this site, most notably The Boy and the Beast (2015) and Mirai (2018). I think he is one of my favourite directors, he really does get to the heart of filmmaking and makes amazing projects. Now, I will be honest – Mirai was not my favourite film from him and I actually thought it was weaker compared to his previous two, so I did not go into this with as much anticipation, even though this one had been a bit more hyped by others in early reviews.

Mamoro Hosoda makes feel-good films that are very similar; family is typically a clear theme for his productions, however, while it is true that there is certainly an element of that in Belle, it’s not really pushed to the forefront initially and it takes it’s time getting into that theme. I would like to explain exactly about how each of his films are different compared to this one, but I don’t really want to give away spoilers too much – basically, it’s about a high school student named Suzu Naito who has fallen into depression after the death of her mother and has a fractured relationship with her father who she doesn’t really talk to anymore, and she has also given up singing. She joins this new virtual reality social network named ‘U’, where she creates an avatar called Belle who becomes a viral singing sensation. While still covering her true identity, she is holding a concert only to be disrupted by one of the martial arts game competitors named ‘The Beast’, a man-beast wearing a cloak on his back that depicts bruises. Belle becomes fascinated with this avatar and wants to find him before the overzealous moderators try to expose him.

I mentioned that this is sort of about families, and this is a new kind of take on it. Somehow this man seems to find new types of ways to do this. In Summer Wars (2009) it’s about meeting in laws for the first time, in Wolf Children (2012) it’s about families that are considered unconventional and how to raise children with different types of cultural identities, in The Boy and the Beast it’s about the family that you make versus the family you’re born into, and in Mirai it’s kind of about a new change in the family and realising you’re not an only child anymore.

In the case of Mirai, its fractured families, and while it goes a bit back and forth about how much it wants to show this off, I actually thought that it handled it really well. Mamoru Hosoda’s films have started to feel quite samey in terms of thematic elements, so getting away from that in this film was probably a wise decision – it meant that it had more impact on the viewer. That being said, he once again did another VR social networking app where we create avatars based on our personalities; this man really seems determined to keep remaking the Digimon movie that he made. To be fair, compared to Oz, (the VR social network he created for Summer Wars) it certainly has some similarities but it’s not entirely the same. From a visual standpoint, you definitely can tell the difference, plus, we don’t spend as much time in U, it doesn’t allow itself to feel like as much of the pop culture identity as Oz did, y can sort of tell that that platform had taken over the world. In this one, I’m surprised it took Suzu this long to get an avatar.

The technology side is a bit too vague this time around. That being said, when we are there, it’s visually stunning. Hosoda actually received some outside assistance this time around including some animation directors such as Tom Moore (who is another one of my favourite animation directors) helped to create projects such as Song of the Sea (2014) and Wolfwalkers (2020); there is definitely a bit of a western influence here.

Mark Kermode described the film as ‘Ready Player One meets Beauty and the Beast’, and while I think that’s a bit of an oversimplification of the film, it’s certainly there. Beauty and the Beast is obviously a core theme, the main character’s avatar is called Belle, and she becomes fascinated by a beast who lives in a castle with loads of weird servants. In fact, some of the shots in the middle of the film are really trying to replicate the 1992 Disney movie. Seriously, someone should do a comparison video of them side by side!, As a reinterpretation of the story merging with modern technology, I really think that this is a good way to do it. I’ve seen lots of attempts at modern reimaginings of Beauty and the Beast, and they’ve always really struggled to bring that story to the modern world and make it work. This one does it quite well by making the beast someone who is subject to essentially what is online harassment, and if there’s one thing that the film does brilliantly, it’s getting to the heart of online interaction and showing (for lack of a better word) how beastly we can get when hidden by the cloak of online anonymity. Much of the excess dialogue is internet comments.

Japanese filmmakers and television runners seem to be really good at accurately depicting our modern use of technology and how we communicate online and I think a lot of western filmmakers could benefit from checking this stuff out. Looking at you, makers of terrible internet based horror films.

I’m probably making it seem like this film is a downer, but Hosoda is able to make a lot of light moments in the film. I had just as many chuckles in this film as I did emotional moments. He does it in a way where it doesn’t feel entirely disjointed. I think where Hosoda really works well is his character writing. Suzu is a brilliant main character, she’s so believable as an anxious teen going through a rough time and not wanting to interact too much with others. Her friendships seem very believable, I also felt that the performances worked out very well for it. I saw this in the English language dub, and that cast was excellent. If you go into this expecting a lot of celebrities and named actors like in a Ghibli film , you’re going to be left disappointed. Unlike Mirai which got John Cho, this one doesn’t really have that. But the actors that they did get were excellent choices. I thought the standout performance was Kylie McNeill in the lead role and, considering that she really doesn’t have many credits to her name, she’s excellent! I actually think that the dub cast was pretty damn good, Gkids did a really good job bringing the cast together.

The other major difference is that all of the songs for the film are also in English – this is a slight break from tradition, since most of the time anime productions tend to keep Japanese vocals for songs, particularly when the character singing has to be on screen. Not only do you have to translate the Japanese into a way that makes sense and keeps the original meaning behind the lyrics, but you also have to match it with the lip movement, which is already a difficult task for normal dialogue, but when you’re singing your mouth can often move differently than when you talk.

I think that they did a brilliant job translating the songs. They’re all pretty good, which is excellent considering the fact that this film really needed to have that element. The Belle songs do deliver in that regard, you can really tell that the character was really put in mind when writing those songs. I wouldn’t really write home about them, but the ones that deliver to the emotional core are really excellent. ‘A Million Miles Away’ is the best song in the film, it delivers the emotional crux at the exact right time and is the thing that ties the film together. It really needs to be nominated for Best Original song at the Oscars. What’s more, Belle really delivers that sense of real emotion but good feeling that Hosoda films do really well, which i feel was missing in Mirai.

This doesn’t feel like a film that is really pushing the boundaries but I wouldn’t exactly say that he’s playing it safe either. The film does a really good job building up to its finale, and boy, does it have an excellent finale. The beginning and middle don’t exactly drag, but the ending is what brings it all together.

There’s brilliant chemistry between most of the characters. I particularly liked the comic relief characters even though they weren’t in the film long enough to leave an impression.

The reason that I’m dancing around the ending slightly is because the film actually has a plot twist that it echoes pretty well, and in all honesty I really thought that this was an excellent story of growth and learning to overcome a really bad situation. It’s a really lovely film, and I would highly recommend seeing it.

It’s an early contender for my best film of 2022, it has stunning animation, great songs, and really good performances. This film really needs to be nominated for Best Animated Feature alongside the Best Original Song. The fact that it missed out on the Bafta nomination is astounding to me.

If it’s playing in your area, I would really recommend seeing it in the cinema to get the full effect of all the work that has gone into producing this film. But, if that’s not an option by the time this film comes out, pre order the DVD or Blu-Ray – this is one you really need to see.