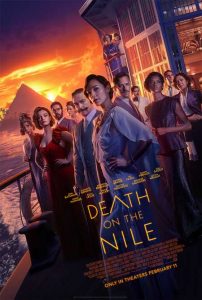 Death on the Nile is the second in a recent series of adaptations of Agatha Christie novels that have been directed by Kenneth Branagh, who also stars in the leading role of Hercule Poirot. And once again he returns with screenwriter Michael Green. This time probably being the second most famous Christie novel next to Murder on the Orient Express. While I think Death on the Nile is a popular work, I think it’s always been in the shadow of it’s more popular cousin. I actually polled my friends and family on this one and asked if they had read or seen previous adaptations of both works, and Murder on the Orient Express was much more seen and read- though, the amount of people who had actually read the books was much smaller than I had realised.

For the record, I went into this rather differently. When I reviewed Murder on the Orient Express, I had seen previous adaptations of the story, so I went in knowing the solution. I have not seen Death on the Nile adapted by previous directors nor have I ever read the book- so I went in completely blind this time. I had certainly heard good things about the story, but I had never actually experienced it; so I went into it as a complete mystery. That being said, the only reason I’m going to avoid talking too much about the film is because to my knowledge people don’t really know what happens in the story despite its many adaptations.

The film’s trailer is actually genius for the fact that it doesn’t even show who the murder victim is.. To get you up to speed on the basic beginning of the story, it starts with Kenneth Branagh’s character, Poirot, encountering his old friend Bouc, (played by Tom Bateman), along with his mother (played by Annette Benning), who are both on holiday but ask Poirot to join them on a cruise along the Nile to celebrate the marriage of Linette and Simon (Gal Gadot and Arnie Hammer). The wedding includes several people from their past as well as a fiancé that Lynette stole Simon from- Jackie (played by Sex Education star Emma Mackie).

This cast is very typical of an Agatha Christie story, you’ve got the godmother of the bride and her assistant played by French and Saunders, you’ve got the cousin of the bride, Andrew, who’s also the lawyer in charge of her will and estate, the doctor who is also Linette’s former fiancé.. Which is a very unrecognisable Russell Brand, which I didn’t even know until I looked up the cast list! Etc, etc.. It’s your very typical murder mystery cast of characters, once again they did a very good job bringing in an all-star cast.

I find it interesting this time there’s certainly more of an emphasis on British actors, there’s far less American actors this time around, the most prominent being Arnie Hammer. The all-star cast all gives an excellent performance. Mostly hammy in parts, but it’s an Agatha Christie story that calls for a hammy performance.

This film is shot beautifully, the did a good number of on-location shots as well as some good intergenerational computer effects. Though, Branagh’s insistence on practical sets in this, and Murder on the Orient Express film allow the vehicle in question to almost become a character, for us to almost bond with it as it becomes a very familiar setting.

The biggest difference this time around is that there’s more of an emphasis on Poirot’s character and an emphasis on his past and his regrets. Poirot is definitely more of a central character this time around compared to the first film. Previously, he wasn’t exactly a passive character but he was more along for the ride and acting as an audience proxy as a way for them to engage with the other characters and suspects. This time there’s more of an emphasis on Poirot as a person and less as a detective. They were certainly going there in the first film, but Branagh had decided to expand it. That being said, I actually think having Bouc as a sort of Watson to Poirot’s Sherlock gives him a good constant person to have interactions with, which is something that was rather lacking in the first film.

The biggest issue I suspect comes from the source material. I unfortunately didn’t have the time to look up a Book vs. Film video, so I’m not sure how well this matches up as an adaption, though, given how loyal Murder on the Orient Express was, I suspect this is yet another loyal adaptation.

Where this falls down is the stuff that they had to keep in the plotline, which is the character arcs are almost entirely thrown away. Without giving too much away about the first film, Death on the Nile doesn’t do as good a job at keeping your suspicions up about which characters are guilty.. In fact, you’re almost ticking them off a list as the film goes on. A character fault is brought up and they’re almost waved away. I personally felt that they needed to nail that, which this doesn’t really do. It did keep me guessing at a certain plot point, though I will say I did kind of guess it right towards the end. If you’re pretty well observant, you can probably figure it out rather early on. I think this actually will do better on a repeat watch. Without giving it away, for anyone who isn’t familiar with the solution of Murder on the Orient Express, with that film the solution just kind of happens out of nowhere. Whereas, on Death of the Nile it does feel like a progression to get to that point. Although I will also suggest that despite the success of Murder on the Orient Express, the team had much less time to do what they wanted to do, and I suspect that there were a lot of ideas on this film that were cut to save time. This is especially evident given the amount of screentime some of the characters get.

The soundtrack is something I will really praise the film for, the early jazz and blues song choices are excellent, and I think they did a very good job all round with it.

Death on the Nile is a commendable film, but it doesn’t feel like it has the same interesting ideas and the same oomph that Murder on the Orient Express had when it came out, and I don’t think the ending is going to shock audiences more than some of the other Agatha Christie stories. By no means is it bad, it’s actually a pretty good movie and has a great cast. Where I think Murder on the Orient Express is worth checking out even if you do know the solution, I don’t know if this is the case for this film. The parts of the film that did work best for me were the interactions between Kenneth Branagh and Tom Bateman. If you liked Murder on the Orient Express, you’re getting more of the same.. So I’d say if you liked that one, check it out. Otherwise, wait until it comes out on Blu-ray or to a streaming service.
Calvin – Nerd Consultant
Share This Post: