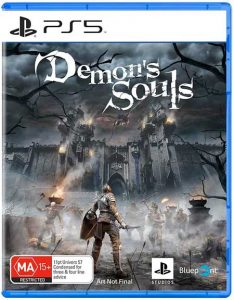 The PlayStation 5 has not only kicked off its launch with a botched pre order program but also a remake of the PlayStation 3 classic that kicked off the Soulslike genre of games Demon’s Souls. The game was revealed during the first of what would be 2 PS5 events in the summer and was later confirmed to be a launch title for the console. This game is a complete remake from the ground up to take advantage of all the technology in the PlayStation 5 including the great lighting effects you get from Ray tracing and the incredible load times of an SSD drive. Though this remake has not been made by original developers From Software but has been handed over to Bluepoint Games who excellently handled the Shadow of the Colossus remake which in my opinion is the definitive version of that game.

Demon’s Souls remake is a must have for anyone who got a PS5. It look great, plays great and is the definitive version of the game bringing back the amazing experience whilst making it feel new and fresh. It would’ve scored higher but the world tendency mechanic put me off so much that it lost points but if you’re up for a challenge this is a real contender for the best Soulslike game with Bloodborne.

Get it digitally is my advice since it currently is like many PlayStation 5 games the disc version has an Uninstall bug which hasn’t been patched out yet but if you already have the disc there are quick workarounds and only uninstalls when you eject the disc.
Calvin – Nerd Consultant
Share This Post: