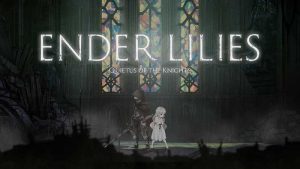 Ender Lilies: Quietus of the Knights

(Available for Xbox One, Xbox Series X and Series S, Nintendo Switch and PC )
(PC version used for review)
(PlayStation 4 and 5 version in development but will release in third quarter of this year due to a delay)

Ender Lilies: Quietus of the Knights is the latest game from indie studios Adglobe and Live Wire. It creates a Metroidvania with some mechanics from Dark Souls brought in, if you’ve played games like Hollow Knight or the Ori games it’ll seem familiar to you. Rather like Hollow Knight, the game also put emphasis on the boss fights incorporating them in a big way though the gothic design of the game has drawn comparisons to Bloodborne by many people. I would say that the comparison is certainly somewhat warranted but I’ll go into my thoughts on what the big difference is in a narrative sense in the review. I got a head start on Ender Lilies buying the game when it hit early access on steam in January, and I was somewhat impressed (but was reserving judgment until I could play the other 5 areas that would release with the full game). The game has finally fully released.

Ender Lilies is a fantastic Metoridvania which rewards exploration, has some amazing combat and very difficult boss fights which drew me to the end of my tether. However, it also had a great sense of accomplishment upon victory. The look of the game is also fantastic using great backgrounds and character models to make a very beautiful yet ghoulish world in its gothic charm. The story is very typical for this kind of game, relying on the player to uncover much of the plot and world, but it’s rewarding to do so and no matter how many times I died, I kept getting up and wanted to keep going because I was having a blast. In fact, my only real criticism is that even going for 100%, it didn’t feel as long as I would’ve liked and I wish I got a bit more, but that being said it is still an experience well worth having.

I would say pick this one up- it’s not too expensive because it’s indie, and despite the short length, the run time goes up significantly if like me you died a lot so you get a lot of worth for your money.