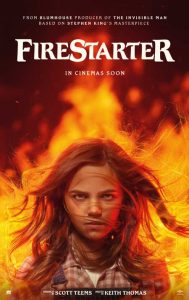 Firestarter is a remake of the 1984 movie, both of which are based on a Stephen King novel. This time, the film is directed by relative newcomer Keith Thomas and has a screenplay by Scott Teems, who did the screenplay for last year’s Halloween Kills and is writing the screenplay for the upcoming Insidious 5.

For the record, I did not read the book in time to see this film, so if I’m ever talking about this in terms of its adaptation, I’m giving secondhand information that has come from people who have read the book. I’ve also glanced at the Wiki page for each to make my own judgement to determine who I reckon is most accurate.

Now, if you have seen the original 1984 film, it’s relatively the same plot of that movie. It’s very clear that this was aiming to be a remake as opposed to being an adaptation of the novel. From what I can tell, this one has tweaked with the novel slightly. Personally, I felt like that was a good choice as it separated that film out a bit more than the previous one. There’s a couple of other big differences – this one is actually 20 minutes shorter than the original film; it only runs at an hour and 35 minutes with credits, whereas the original runs at 1 hour 55 minutes with credits. So obviously, there has been some cut content, and man, does it feel that way. I’ve heard some people say that they really liked this film, but I actually found it to be really hollow. I don’t understand why this film received an R rating, I think that Blumhouse (who produced this film) must have insisted on it getting an R rating to make it seem edgier than it actually is, but apart from a few bits of gore (people being burnt) there’s not really much here that justifies the R rating or the 15 certificate in the UK.

In fact, it actually strives away from some of this. There’s a bunch of moments where I felt like the R rating meant that they could have gone further in certain scenes. I think though that might be down to the fact that this film didn’t have a large budget, and unfortunately, it really feels like it.

Now, it’s not as if the film isn’t trying hard, it certainly is, but I think a lot of issues in this film stem from the fact that it’s not able to go all out with the effects. The film feels rather tame and the cut content means that there’s some character development missing. There’s Rainbird (played by Michael Greyeyes) who has a character arc in this film that really doesn’t feel justified. There must be a whole bunch of stuff in the novel that felt missing in this film, because the conclusion that we came to in this felt really unearned.

Parenthood is the main theme of this film, mainly surrounding the two parents Andy and Vicky (Zac Efron and Sydney Lemmon) who got powers through experiments performed in the 80s and are now protecting their superpower daughter Charlie (Ryan Kiera Armstrong) who can set fires with her mind. She’s been discovered by the organisation that gave the parents their powers, and the parents are trying to protect her from them. The biggest modernisation to this story actually comes from their tactics, for example, they have minimal communication devices; they don’t have anything like smartphones or wifi since those can be tracked. I know that there’s a sci-fi element but surely a VPN could have worked?

Speaking of which, the sci-fi elements are rather down-toned, apart from the weird experiments there’s not too much of this aspect in the story, it’s quite clever when it’s used, though.

The biggest problem with Stephen King stories is that they often don’t nail the ending, this is actually a joke that was going on during the second chapter of IT, it’s almost common knowledge that endings are his weak spot. It definitely stands to reason here. Think of most Stephen King films that you like, I guarantee that a good chunk of them have a good ending only because they changed the ending from the book. The Shining didn’t have the same ending as the novel, Shawshank Redemption changed it slightly and added on a few things to make it better, etc etc. Meanwhile, IT does retain most of the ending from the novel and this is why a lot of people didn’t like it! My point is, the ending of this film is no exception to the rule. This doesn’t feel like a film that ends, it feels like a film that stopped. It really felt rushed! I think that this is down to the fact that a whole bunch of stuff was cut, and I think that there must have been some sort of demand from Peacock in this one; in the States, this will not only be played in cinemas but it will go to Peacock as well, and I think that this worked to the detriment of the production. Granted, Peacock isn’t too demanding as WWE pay per views, but it does feel like there are a few editorial mandates that have been put in place for this film.

The performances were quite good for this film, Zac Efron gives a good performance in the scenes he’s in. Ryan Kiera Armstrong is doing a very good job as well, considering the fact that she’s playing a role that was originally played by young Drew Barrymore.

Put it this way, I think Firestarter has all of the building blocks for something good, but that’s all it is at the minute, It’s a decent film and it’s a lot better than some other Stephen King adaptations, but that being said as a whole I don’t think it entirely works. The cast are giving good performances but the film feels like it’s had mandate issues and it’s been gutted in the editing room. This one’s a rental at best. It feels like it would have been better off if it was picked up in the UK by Netflix or Amazon Prime.