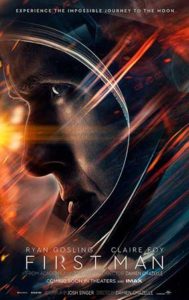 First Man is the first bio pic to detail the life and career of Neil Armstrong, who famously was the first man to walk on the surface of the moon.

It comes to us from director Damien Chazelle who I’ve previously talked about on this site. He is an Oscar nominated director, though his previous nominations where for his written screen plays, Whiplash and the previously reviewed La La Land, which was the only film where he also received a directors nomination which he won. Clearly unsatisfied with only one Oscar he’s gone for this film, which to be fair is a very ambitious project for him. Granted La La Land was a big production, but not to the scale First Man is attempting. Unlike La La Land and Whiplash, Damien Chazelle has not written the screenplay, that has been handled by Josh Singer, who has written some screenplays for Law and Order, The West Wing as well as The Fifth Estate and the previously reviewed Spotlight and The Post. Spotlight of course being the film that gained him his Oscar. So here we have two Oscar winners trying to create a story that most of us already know.

I thought recently about what made the film Apollo 13 work. It was basically just by showing how much danger they were in, which creates jeopardy to a story we already know. The First Man has a similar issue, you do know what’s going to happen. Neil Armstrong becomes the first man on the moon, and it’s a big triumph for America in the height of the Cold War.

There’s two ways in which Damien Chazelle tries to make this film work. The first is that he tries to show just how important this was. One of the early lines is that the Soviet Union had practically beaten America to virtually every major space accomplishment. The Americans have achieved much but they had to succeed in one way. It also shows the incredible amount of time and effort that took place. The film actually begins in 1962 and tells the story over a seven year period to the famous mission. The second is, it tries to put you front and centre to the missions. It shows man y of the early tests that Neil Armstrong was involved in and it also makes you feel like you’re there in person. It just shows how much of a gamble it truly was, some of this stuff is dangerous by todays standards. You’ve got to imagine how injurious it would have been back in the 60’s.

The film also does that usual bio pic thing of trying to get into the subject that we know. Mainly in this case in. one of the early parts of the film it is about Neil Armstrong’s bereavement in early life, having lost his young daughter to cancer, and how the grief affected him in multiple ways. It also talks about the relationship with his wife Janet, played by Claire Foy. Now I’m not incredibly knowledgeable on the historical accuracy of a lot of these events. The film itself was based on a book by James R Hansen, but from what I’ve researched into it, doesn’t look like they’ve embellished too much on the storyline and it does pain t a picture of basically a man trying to find his place and find some purpose, even if that is at the sacrifice of himself.

Ryan Gosling is put in the role of Neil Armstrong and he once again sells the part very well. I actually thought his casting was a bit of a weird choice, considering that if you’ve seen a Ryan Gosling film, he really doesn’t look much like Neil Armstrong. But fair play to the make-up and hair department they did an excellent job at making him look like him. Ryan is clearly putting his best into the role and this is probably his best performance since Blade Runner 2049.

Now I suspect some people will say this is an inaccurate film in one way or another, but as a biopic it does a pretty decent job. The film has drummed some controversy though, for stupid reasons, some people were annoyed that it didn’t show Neil Armstrong erecting the American flag on the moon, which seems rather odd considering that they clearly judged this film before they saw it, this is one of the most American patriotic films I have seen in a while. There are several scenes with the American flag in the film, including a scene where a child raises a flag.

Controversy aside the characters are all pretty damn decent. Including an excellent performance from Claire Foy, who I am fairly certain will be getting her first Oscar nomination for this film. Other great performances include Kyle Chandler but of particular note is Jason Clarke who really sold the role as Edward Higgins White, considering I’ve not been a fan of a lot of the films he’s been in, I’m actually really routing for him to get a best supporting actor nomination off the back of this film.

Mind you, not everyone is so happy. I like Corey Stroll as much as the next man and he delivers a good performance in this film, though I suspect the real Buzz Aldrin won’t be pleased with the way he’s written in this film, considering he has quite a lot of moments where he acts like a jackass and I am certainly someone who doesn’t think of Buzz Aldrin in that sense, mind you I don’t know what’s going on in the process of writing this film, maybe something got lost in cross wires.

If there is one thing were first man really succeeds though is the set designs, cinematography and the effects. The effects in particular are amazing. The film starts out with an excellent test flight sequence and it only gets better from there. The film really throws you into the first person. This film has a lot of shaky cam but it understands exactly why you should use it, because the film uses shaky cam properly. It is used to emphasise danger and unease, as well as really putting you in the front and centre with some of the more risky operations. This makes a nice breath of change, where shaky cam is often used to cover up poor choreography in action films. The authenticity of the films historic character is amazing. I’ve already mentioned how great the cinematography is but just how much effort was put into recreating some of the stuff that was used at the time is damn brilliant. This film really should be up for a lot of the technical categories come Oscar season.

Sadly, First Man is not a perfect film. This film is 2 hours and 21 minutes long, and it really has no right to be. I reckon you could have cut 20 minutes of this film and it wouldn’t have felt worst off. This is definitely an example of a story that out stays its welcome. Though unlike many films where this could ruin it, if this film was a person I would have been a bit annoyed that they stayed too long, but where our first half of the conversation was actually alright, I wouldn’t mind inviting them back. The film also suffers from a few pacing issues as well. While I appreciated there was minimal dialogue at a lot of points in this film, I think it might be a bit of a deal breaker for some people. I noticed a pair of people did walk out of the cinema before the end of it. Like I said though, the lack of dialogue for me is a positive since a lot of this film is told through simple expressiveness.

One thing though, I am kind of worried about with this film is the fact that there is a lot of points of this film which feel a little bit like they didn’t need to be there. Just a couple of points where I said, “I reckon I might have cut that” or “I’m not sure that really lead to much”.

First Man I reckon is a film that’s going to divide people. I actually think it’s a pretty good film. It is a little too long and has a few points that don’t entirely work, but as a whole it’s an interesting look into the life of Neil Armstrong. Special props to the performances of Ryan Gosling, Claire Foy and Jason Clarke. This film also has some of the best cinematography and effects I have seen all year. It’s a film that was actually rather surprising in a sense, but in another was also quite predictable. I’ve seen quite a few biopics like this and you really can get the feel that this film is aimed at the awards season.

If you haven’t seen First Man yet I really recommend seeing it in cinemas since I think it will play best on a big screen.

Well that’s it for another film, next week I look at a film that more than likely won’t get any Oscar nominations, but it is the follow up to one of my all-time favourite horror films it’s Halloween, directed by David Gordon Green.

With all that being said, Thanks for reading this review, I hope you’ve enjoyed reading it as much as I’ve enjoyed writing it.
Calvin – Nerd Consultant
Share This Post: