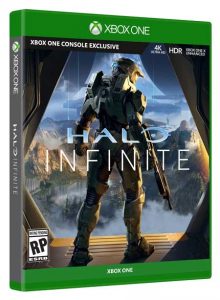 Halo Infinite was supposed to be a launch title for the Xbox Series X and S, however after large concerns over the state of the graphics during a gameplay demonstration in the summer of 2020 it was pushed back be development studio 343 to come out a year later. This did do damage to the momentum of the Series X and S but it seems to have done fine with good Game Pass deals. Microsoft also offered an excellent deal by not only offering cross saves between the PC and Xbox versions in the same way that the Master Chief collection did, but that the multiplayer would be free and the campaign would come to Game Pass. If you’ve played previous Halo games then you’ll know exactly what you’re in for, it’s still the innovative First Person Shooter you’re used to. The big difference in the campaign this time is that it’s an open world game with a quite a few side quests. The multiplayer is also the similar to previous games with the most notable features not at launch being Forge mode and co-op campaign

Halo Infinite is a pretty good return to form for the series. The campaign has it’s issues but it has been one of the more enjoyable ones in recent memory and I have been particularly enjoying the multiplayer which with these maps has been my favourites since Halo 3. The graphics also really justify the year long delay since this game looks really good. I do have issues with features missing, the story needs expanding with updates and the way multiplayer experience points is handled does make me annoyed and is an indictment on the current state of the industry. That being said this is a good companion piece to the Master Chief collection and if you enjoy Halo I suspect that this might bring you back

It’s on game pass which you really should sign up for at this point if you have an Xbox or PC for sheer value for money. I would say even if you aren’t on game pass it is worth a purchase to get in now so you’re less overwhelmed by the number of updates in the future and I suspect this is going to become the premiere Xbox multiplayer game.
Calvin
Nerd Consultant
Share This Post: