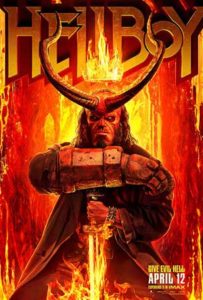 Hellboy is one Guillermo del Toro’s most well known films and probably one of the films that largely brought him to public attention. Now, he made two films with star Ron Perlman, setting up an arc, that unfortunately was never quite fulfilled, but that being said, even with that in mind the first two Hellboy films are actually relatively strong films. Honestly I would actually say, go back and watch those films, I think they have held up a lot better than people remember.

The fact of the matter is though, Hellboy was definitely due another film and with Lionsgate holding the rights, another film was in production, however due to various back and forths and creative decisions, Director Guillermo del Toro and star Ron Perlman were not on board and believe me, this film went through a hell of a production.

I’m going to talk about some of the other faults in the film’s production in the review, but let’s just say that this film went through quite a few phases, it was originally meant to be a follow on from the continuity of the first two films and basically be Hellboy 3, that fell through and in its place it was announced that the film would be a reboot. It kind of feels weird to reboot Hellboy now considering it hasn’t been that long since the last film, but I have heard of other comic franchises that have rebooted quicker, I mean, let’s look at the Spiderman films, for crying out loud, that’s been rebooted twice in the space of two decades.

In the director’s chair is Neil Marshall, director of such films as “Doomsday”, “Dog Soldiers” and the “Descent”. He’s actually a decent choice to direct Hellboy, he has actually been away from big films like this for quite a while. In the lead role replacing Ron Perlman, we have “Stranger Things” actor, David Harbour, again not too bad of a choice.

There is a lot to say about this film but let’s start with the plot. Ok, now Hellboy, as I mentioned, this 2019 film is now a reboot of the franchise but it’s supposedly sticking closer to the comic series created by Mike Mignola, more on that in a minute, but the basic plot is that Hellboy, played by David Harbour, is investigating several incidences around the world which lead to a plot to unleash a Queen who had been cut up into several parts by Arthur in Excalabur, the Queen is being played by Milla Jovovich of Resident Evil fame. The film then sets up a loose plot of should Hellboy really be helping the humans considering that there is some level of persecution towards the monsters which he might be a part of and, oh my god, that is an over simplified version of the plot of this film because dear god, Hellboy is all over the place! I am not joking, you think my introduction’s rushed, you should actually see the film. This film has probably one of the most rushed intros I have ever seen in my life. Ian McShane who has a minor role in this film, and I use the word minor very accurately, it feels as though he came on to set in between takes of John Wick. But man, he sounds like he’s trying to get through the script as fast as possible in this scene just because he needs to go to the toilet!! That’s the least of this film’s problems, this film’s plot is such a mess, there is so little connecting any of the scenes together, it’s like a multitude of ideas and sub-plots.

The cast is also really all over the place, we have a character called Alice, being played by Sasha Lane as well as another character played by Daniel Dae Kim, who were given so little to do, they feel completely useless in the film. It also doesn’t help that there is virtually nothing new added to this version of Hellboy, it follows so many of the plot beats of the other films without really adding any flair of its own. Everyuthing about this film feels inferior to del Toro’s films. There was something niggling in the back of my head and it wasn’t until we got to an action scene involving giants that I kind of realised what this film wanted to be and when I saw all the gore in that scene is when I realised, this film wants to be “Deadpool”. The del Toro films had PG13 ratings, this film is the first one to get an R rating and it’s very clear that the studio Lionsgate were aiming for 20th Century Fox’s market with the success with R rated comic films, with Deadpool and Logan. The thing is though “Deadpool” and “Logan” made sense to be R rated, those characters and their plotlines had been held back in previous films because they were particularly violent characters that coulnd’t go all out. I don’t think anything is added to Hellboy by giving it an R rating, if anything it feels rather unnecessary and almost kind of juvenile.

Now, the imagery in this film is actually quite imaginative and some of the practical and CGI effects at least hold up. The only issue is that they are not entirely consistent between scenes. The action scenes are actually something I can say something positive about, not all of them hit, some of them are terribly, but the ones that are shot well are shot very well. But good god, this film needed a more compelling villain! Now, this is not entirely Milla Jovovich’s fault, I have often said in the past that I’ve found her to be a rather one note actress, but in this instance, the script is failing her. She can’t play an interesting villain because she’s not written to be an interesting villain. It’s that classic “join me, I’m not the real enemy”, even though I clearly am! For god’s sake, it’s possible to do this plot point properly, I don’t get why people keep getting this wrong and oh, dear god, this film has some of the worst plot structure I have seen. I have no idea what the hell was going on with the script, because it just feels like a bunch of jumbled ideas that have been stitched together. This film has clearly been destroyed in the editing room and there have clearly been several different people trying to mess with it. In fact I wouldn’t be surprised if down the line we get a superior director’s cut from Neil Marshall, who seems to have really distanced himself from the film, most noted by the fact that he has been rather absent from the press tour. It’s also kind of a shame because David Harbour is not doing a bad job playing the main character. I don’t think he is as good as Ron Perlman in the role, but he is clearly trying his best, but again, the script fails him repeatedly. Most of the talented people in this cast deserved a lot better than to be in this film.

Hellboy might not be fantastic for levels of bad, but man it is one of the worst comic films in recent memory, staggeringly bad, a dreadfully boring and incoherent plot that is trying to hang on some decently shot fight scenes which don’t make up for the fact that there is no reason care about them. Poor performances and a film that has clearly been ruined in the editing suite by too many people getting their hands on the film with their own visions. It’s a mess, pure and simple and I suspect that this film will definitely be in my 10 worst films of the year list. If you like the original films, this one is going to be really hard to get through when you’re not experiencing, in theory a déjà vu and it’s kind of proof that Guillermo del Toro really understood what made the character work so well and if this film does stick closely to the comics, more that del Toro’s films did, it’s a prime example that sticking closely to a source material is not a guarantee of quality.

Well that’s it for me this week. Next week I review the film based on a true life story, staring Judy Dench with “Red Joan”.

With all that being said, thank you for reading this review, I hope you enjoyed reading it as much as I enjoyed writing it.
Calvin – Nerd Consultant
Share This Post: