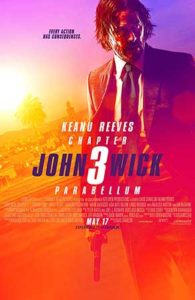 This is the third entry in the John Wick series. I have reviewed both of the previous films; you can get my thoughts on them there although I would say don’t go back to my original John Wick review since I didn’t fully appreciate it when I first saw it.

Once again in the director’s chair we have former stunt man turned director Chad Stahelski and there’s not much more to add to this one. So with a warning for spoilers for the end of John Wick 2, let’s talk about John Wick chapter 3.

At this point John Wick (once again played by Keanu Reeves) is on the run having broken the rules of the High Table and by assassinating the villain of the second film on consecrated ground.

With that all happening John is about to be declared ex-communicado and has a fourteen-million-dollar bounty on his head with every assassin under the table planning to get him! Not helped by the fact an adjudicator played by Asia Kate Dillon is also planning to take down everyone who’s even remotely helped John out.

Oh boy. Where to go with this one!?

If you like the previous John Wick films like me, this one is pretty much all the same thing. What amazes me about these films is they take a very simple premise and they kind of throw a new interesting twist. The first film was a pure revenge story which set up the core concept and does a decent job. To such an extent if it was a standalone it could have easily been its own thing and none of us would have been any worse off. The second film saw a scenario where John was out of control as opposed to his first appearance where he was almost in complete control the entire time. This third film puts John at his worst state, he’s now being hunted.

But of course, we know John’s pedigree, so, as Winston (once again played by Ian McShane) points out, a fourteen-million-dollar bounty on his head and virtually every assassin in the city after him, I’d say the odds are about even.

As Film Brain said in his review (as he got his out before mine) the opening segment of this film is extraordinary. It’s a scene that gets you to distrust every single person on camera. You really feel like anyone of them could be an assassin out to get Wick. And of course, once again, the fight scenes are amazing!

The third John Wick film once again sets the standard for how fight scenes should be shot. It’s phenomenal how well they’re choregraphed. Many reviewers have pointed out that the John Wick films treat action scenes like musicals treat dance performances and that’s very accurate.

It seems like the directors and writers know this because there is a nod to in the fact that one of the characters, ‘The Director’ played by Anjelica Huston, is a ballet instructor and we do get an action scene interspersed with a ballet performance. What they do with these action scenes is phenomenal once again. There’s actually ninja styled combat in this one and if you’re thinking ‘well I’ve seen virtually everything I can see on camera in regard to ninjas’, you are mistaken. They actually managed to make the actors disappear and then suddenly reappear out of the shadows.

Judging by the way its shot this looks like this is done through simple lighting placement and good choice in costumes rather than through computer effects, It’s outstanding how it’s done. There are some excellent fights that stand out, including a knife fight in an antique shop and a fight in Casablanca involving two very well-trained Alsatian dogs.

Okay, so you should be able to get my point. Once again, they’re doing lots of long continuous shots and they take advantage of the choreography. That’s all well and good but what does the story do this time? Well, I’ve already mentioned that this one has John Wick being hunted and, in a position, where he has virtually no help. But as much as I like this film, and I really do like this film, it does feel like the writers are kind of stretching it now. They’re not really sure what to do with most of these characters which is one of the reasons why I find it interesting that this film seemed to introduce a few more, most notably Sofia, played by Halle Berry who takes to the role like a duck to water and is honestly one of the best parts about this film.

Returning characters don’t do that much in the film. Winston is pretty much side-lined up until towards the end of the film. Laurence Fishburne’s character who’s only in the film for a few scenes and some characters who you would expect to come back, haven’t. The assassin played by Common for example is not in the film at all and it’s a real shame, considering that their rivalry was one of the best parts of the last film. His role has been taken up by Hawaiian actor Mark Dacascos who you might recognise from films like “Drive” and “The Island of Doctor Moreau” and honestly, his role as being a sort of John Wick fan boy who really wants to kill him is amazing.

Newcomers also include Game of Thrones star Jerome Flynn, who no, we still have not forgiven you for Resident Evil The Final Chapter and I think a few other names which I won’t give away entirely.

This film, unlike the other two, seem to have a bit more of a sense of humour about itself with a few of its lines. Particularly one line, which is a homage (or as I call it in this case, a complete line for line repeat) of something from one of Keanu’s most famous movies. I think I’ve already said too much just by saying that! As well as the fact that the film just seemed to have a few more one liners and stuff like that.

Now as for the villains, here’s the thing though, we’ve only got so much we can do with this whole thing and that’s not to say that the film wastes this premise but it’s starting to feel like the franchise is on thin ice, with only so many places it could go from here.

Now as great as the action is you can’t base an entire film around that and fortunately John Wick chapter 3 manages to get in line with that telling an excellent story and doing a really good job, all things considered. However, I think a fourth film would be pushing it. In fact, I did expect John Wick chapter 3 to be the final entry however the ending does suggest that this is not the final film. If this is the case, the direction that they’re going to go in actually makes me think that I wouldn’t mind a fourth movie however I’m also fearful that this next entry could be the films undoing.

John Wick chapter 3 is another excellent entry and while I don’t feel it quite reaches the height of the first two films it’s still another excellent movie that is a standard bearer for action films. The new cast members do really add to the film and the old ones do also seem to fill their roles pretty well, without being overly extended due to popularity.

If you like the other John Wick films you’ve almost certainly already gone to see this one. If you’re waiting for it to come out on DVD, I assure you, seeing this in the cinema is probably the best way possible. I think it will really make you appreciate the amount of effort that’s gone into making this film.

If there is to be a John Wick chapter 4 I’m all on board with it, however, I feel like the franchise might be starting to run out of steam and over pushing it, might cause it to be in a very precarious position, however I remain optimistic. Hopefully that optimism will carry me through next week because I have a bad feeling about the film I’m going to be seeing.

Next week I review the live action remake of one of my childhood classics, Aladdin.
With all that being said, thanks for reading this review. I hope you enjoyed reading it as much as I enjoyed writing it.
Calvin – Nerd Consultant
Share This Post: