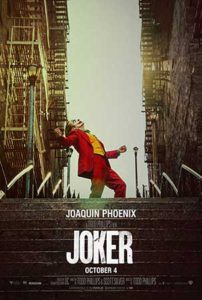 Joker is the latest film to come from DC, although from what I understand it is not going to be part of DC’s extended universe of films. It is, however, still under the banner of Warner Brothers and still apparently is taking place in late 70’s, early 80’s, so it’s entirely possible that Warner Brothers are simply wanting to keep the option available in case the film was a success. The film has been directed and co-written by Todd Phillips, who directed The Hangover trilogy. The co-writer he has collaborated with is Scott Silva, who wrote the screenplay for 8 Mile.

Now, firstly I went to the film with minimal expectations since I’m someone who actually is of the opinion that most of the best aspects of The Joker come from the fact that you know very little about him and his motivations, most of what makes him great, because of his simplicity, but I was fully in favour of where they were going with it. The Joker this time is played by Joaquin Phoenix and the film acts as an origin piece showing the series of events and the slow breakdown that leads the young man named Arthur Fleck into becoming the clown prince of crime.

Now Joker has been very mixed in terms of reviews, although I find many of the people that are giving bad reviews to the Joker’s motivations suspect at best. My personal opinion, I think Joker is a really good movie. Now it is important to say that in regards to the film’ politics, it is important to remember that the film does have a sympathetic view to mental health issues, but it is also important to remember that people with mental health issues are more likely to be the victims of violence, rather than the perpetrators of it. The fact is though, Joker is an excellent take on someone’s slow decline into a very dark place. I actually don’t want to give away too much about the film as it is best to go in with as minimal knowledge as possible in this case. Let’s just say that this film knows exactly what it wants to do and sets out to do it. Most reviews have also made comparisons to the Martin Scorsese film, King of Comedy, which this obviously takes a ton of influence from. This is not surprising seeing that Scorsese was at one point attached to the project, which is even more surprising given what he said about Marvel films recently, the elitist git!

What I really like about the film is Joaquin Phoenix’s performance, he really nails it on several levels, however, if you are going in this film expecting this to be very much a DC Comics film I think you might be sadly mistaken, because I have read all the comics, this film does not exactly pay much tribute to the comics, in fact there’s not much of that in here. While comparisons will obviously be made to the Killing Joke which is one of the few Batman comics to actually delve into the Joker’s origin as it has been largely implied to be the actual origin, it has never been fully confirmed but obviously it’s very different given the fact that this story exists when Bruce Wayne is a young boy, as opposed to the Killing Joke’s origin which takes place after Batman has been doing his work for some time. There is not much emphasis on Batman law, in fact, the most prominent factor is the inclusion of Thomas Wayne, who is played by Brett Cullen who is running a campaign to be mayor of Gotham City. That being said I will say the shots of this film are excellent. This is kind of what I imagine a pre-Batman Gotham would look like. It is certainly a more realistic portrayal of the city. It is certainly the closest we’ve got since Christopher Nolan’s Dark Knight trilogy. The one this I will also say against the film, it definitely feels like a slow burner and that might turn a few people off, but fortunately for everyone, this film did receive the R rating it needed which means everyone calling for it to be banned because it might frighten kids, yeah you got what you deserved, this clearly was not meant for them.

I spoke briefly about Joaquin Phoenix’s performance and title role, but to go into more detail, the dedication put into it is great, simple things like the laugh which in this continuity is part of the condition that he has are excellent, but he also adds some amazing sense of physicality to the performance and it is made even greater when you realise just how much weight Joaquin lost; he looks down to the bone in some shots. There’s just one problem I have though – the fact is, it seems like they’re going for a rather sympathetic portrayal of the Joker at points. I just don’t imagine this is the character that’s going to be incredibly threatening. You definitely see elements of that towards the end of the film, but because the Joker is the title lead, you almost have to do a story where the joker has to come out on top by the end, and that’s a very hard film to root for. We’ve done this whole film shows descent and makes us wish that it hadn’t gone down that route, only for us to then expect to then see him as the villain and that’s very hard to do after that point. In fact that’s the one element of this film that means it’s slightly missed the peak of the mountain but was an inch away from it. That being said, if this was to become part of a DC Extended Universe, I’d really like to see Joaquin reprise the role to see if they can make him a proper villain down the line.

So then we come to the other performances, and that’s where there is some really great performances. There was a really good performance by Brett Cullen, Francis Conway, Zazie Beetz. I think one of the better performances was by Robert De Niro in what is his best role in years, as an obnoxious late-night comedy host names Murray Franklin who Arthur aspires to be a guest of. Honestly, if you felt like De Niro’s career was on a downturn, this is a film for you because this is one of his better performances.

Something else I really think is excellent is the score. This film’s music score is fantastic – I really hope it gets nominated for Best Score at The Oscars next year – it’s been a real stand-out. And the cinematography – wow, they did an excellent job in this film.

Joker is a really good origin story for a character that we all know, told in a rather different way. In spite of the rather mixed messages of the writers and director, it’s not perfect but it does a really cool job and is capped off by an excellent looking Phoenix performance which I think sadly, because of politics, will mean he will likely not receive an Oscar nomination. As a film though, it’s excellent! I genuinely think if you were on the fence about this film you should go and check it out to make up your own mind.

Well that’s it from me this week. Next week I check out the film directed by Ang Lee produced by Jerry Bruckheimer and starring Will Smith (twice!), it’s Gemini Man.

With all that being said thanks for reading this review – I hope you enjoyed reading it as much as I enjoyed writing it.
Calvin – Nerd Consultant
Share This Post: