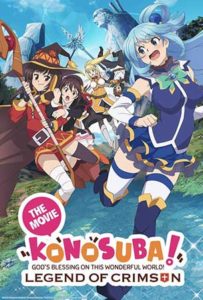 So, this is a review that’s really just for someone like me. I really, really like Konosuba. It’s one of the funniest Anime series that have come out in recent memory. Now, I wrote a large portion about it in my book. In fact, it was one of the highlights of writing the book talking about Konosuba. And it’s a shame as well because I couldn’t talk about just how funny it is. For those of you who don’t know, Konosuba is the story of Konosuba, an out-of-work neet who dies and is reincarnated by a goddess named Aqua who makes fun of him upon hearing of how pathetic his death was. Trust me, it’s really funny when you actually see it. When he’s transported to the other world, he can take whatever he wants with him and takes Aqua with him, and hijinks ensue. He’s joined by a wizard named Megumin who can only cast a massive explosion spell once a day before being completely drained of all energy, and a masochist warrior named Darkness who likes to throw herself into dangerous situations.

The series is basically making fun of a boom of light novels coming out in Japan around that time that had gotten insanely popular thanks to the success of Sword Artonline, and as a result, writers were becoming complacent. Konosuba was a breath of fresh air because it was essentially taking the complete piss out of it. We’re now two years since the conclusion of the last season, and a third season seemed unlikely. This is largely down to the fact that Studio Deen, who were animating the series and held the license, had dropped it, however, it has been picked up by JC staff who have commissioned this movie. More on my thoughts on that later, but suffice it to say, JC staff have a bit of a mixed record rather than Studio Deen who might have had a bad record a decade ago but have since reinvented themselves this decade.

The movie was announced to be more of an exploration of Megumin’s character, and that’s definitely the case. It basically involves the party travelling to Megumin’s home village, which is the Crimson Demon village, to deal with a massive threat. And now, this village’s primary hope are four idiots. Hijinks ensue. Once again, I really don’t want to talk too much about the film since it’s ultimately that the best jokes come down to being surprised by it, but basically, the movie’s an extended episode of the show. It almost feels like a short, unofficial third season. And rather like the show itself, it’s also remarkably short. It’s very quick; it doesn’t even hit the hour and a half mark, finishing at 86 minutes, including credits. I actually think this is wise – Konosuba’s not exactly got a lot of pathos, so as a result, you can’t really extend it out like a traditional fantasy universe. You’re pretty much in a position of, well, you’ve now just got to get all the jokes out there. And once again, it does an excellent job. They even keep some of the hilarious scene transitions that the TV show had.

That’s also where it comes to my other point, though. It’s not like it’s much better animated. There are certainly ones where they’ve clearly had a film budget, but it feels like a slight step up from the TV series. Speaking of which, JC staff have done an excellent job recreating the great character design animation that Studio Deen put into Konosuba. It doesn’t look like this has come about from a result of a changing of animation departments, mainly because pretty much all the staff came back to work on this one, including director, Takaomi Kanasaki, who handles the project brilliantly. Now, it has a nice, decent running plot, it somewhat ties back in the TV series, and of course, it’s really, really funny. This is one of the funniest films I’ve seen all year; it’s so hilarious. But really, at this point, this is so far into the story that your enjoyment of this is purely going to be on the basis of, “Did you enjoy the TV series?” If the answer is yes, this is completely up your alley. I think the standout this time is not only in terms of the plotline but also the comedy. This time, scenes between Kazuma and Megumin, the latter of which actually gets some of the funniest moments in the film, and the new side cast that’s been added do actually add a lot more to it. I could definitely have seen this becoming its own TV series, had they chosen to extent out this plotline.

My advice at this point is to really pick up Konosuba and to really binge through the series if you wanted to check this one out because it’s so worth your time. And it’s also remarkably short – each season only has ten episodes. And honestly, after being bored out of my mind last week with The Irishman, to have a film where I just felt comfortable and got to enjoy myself for just an hour and 20 minutes, made it really worth it. Konosuba: Legend of Crimson is really a movie that will be predicated on your enjoyment of the TV series, since it’s essentially an extended episode with a slightly more epic feel. It’s remarkably short but it nails its characters and its comedy. All the staff return, and the Japanese voice cast from the TV series reprise their roles expertedly. I should mention at this point in time, there is no English language version, though an English language version of the TV series exists, so I’m certain that when this receives a DVD release, most of those actors will be reprising their roles, and if that’s the case, good news, because they’re also very good in those roles. If you didn’t get the chance to see it in the cinema or you haven’t seen the TV series yet, check it out. It’s really funny, and it will make seeing this one worth it.

Well, that’s going to conclude my thoughts on Konosuba. Sorry, this was a short film, so I have to keep the review short as well. I’ll be back in the New Year with my review of Star Wars: Rise of The Skywalker. Have a good holiday in the meantime, I’ll see you in the New Year. Thanks for reading this review, I hope you enjoyed reading it as much as I enjoyed writing it.
Calvin – Nerd Consultant
Share This Post: