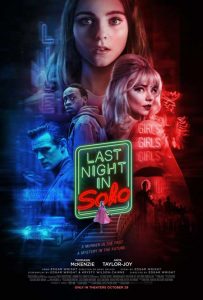 Last Night in Soho is the latest directorial film from Edgar Wright, director of films like Shaun of The Dead, Hot Fuzz, Scott Pilgrim vs The World, and Baby Driver. In short of a resume like that, he’s one of my all-time favourite directors. So, when I saw the trailers for his new film coming out, I got very excited. Last Night In Soho had perfect timing to open on Halloween weekend. Now, I went in to see this film having only watched the trailer, which while giving a brief synopsis of the plot was also slightly coy with the plotline, and Edgar Wright has said in multiple interviews and on Twitter that he hopes no one spoils the film for people.

As a result, I’m going to be quite coy about the film’s plot and try to limit myself to only things that were shown in the trailer. In a basic sense, it’s a film about two people: a modern girl named Eloise played by Thomasin McKenzie and a wannabe singer in the 60s named Sandy played by Anya Taylor-Joy. (You might recognise her from films like The New Mutants and The Witch; in fact, she was fantastic in The Witch.) The film involves Eloise moving into a bedsit in Soho since she’s gone to University College London to study fashion design, and in her room at night she has very realistic dreams of Sandy in the 60s, and while she’s incredibly inspired by them initially, they do eventually start to take a turn. That’s all I could really say about the plot without diving into it and spoiling a lot. I’m desperate to go on more and more about it but I’ve got to be fair to the people who haven’t had a chance to see it. It’s a shame because the film tackles multiple themes at once, and in terms of visual language, this is probably Edgar Wright’s most ambitious film since Scott Pilgrim vs The World; it’s certainly the most he’s had to use special effects since then. The use of visual effects and lighting is fantastic in this film.
How do I put this? You know that friend of yours who thinks they were born in the wrong era and would have thrived if they were born in the 60s or the 80s because “the music and the movies were so much better back then” and people were more content and it was a better time, and they really hate it when you point out all the negative things about that time period and that everything now is objectively better in spite of the fact that there are still issues in the world? This is not the film for them. This really is an anti-nostalgia film. There are certainly a lot of 60s imagery—there is a famous shot where we see a poster for Thunderball, for example—but, as the trailer implies, the film definitely shines a light on the rather darker side of London which existed in the 60s. It kind of shows that it was not “The Summer of Love” for everyone. Though, the biggest use of 60s iconography is definitely in the soundtrack: The song ‘Downtown’ is very prevalent alongside other artists from the time period, including artists like James Ray and Cilla Black. It’s not really the rock bands that were big in the 60s, more the singer-songwriters that were playing at things like high-class clubs and theatre venues. And the song choices are actually quite appropriate for certain transitions. For example, the James Ray song that was used was ‘Got My Mind Set On You’ which perfectly matched the tone of the sequence, and, rather than being a nostalgia trip, it’s feels that each song’s been very meticulously chosen on where it’s meant to go. Again, the 60s iconography is also kept within a modern setting with the casting of actors like Terence Stamp and the late Dame Diana Riggs.

Now, the big question is, based on the trailer: Is this film scary? Well, kinda. Put it this way, Last Night in Soho plays on a fear that a large portion of the population have, but if you’re not in that part of the population you might not necessarily get it as much. A good film, however, will do what this film does: take a social issue that you are not necessarily affected by and force you to empathise with the person affected. And I actually think Eloise might be one of my favourite protagonists in a film this year; while many of my experiences don’t match up with hers, I did empathise with her in many ways. And she’s very well-written, a sympathetic character, and they do a great job making her work. I feel like this film is really what I’d like to call a horror film for people that don’t like horror films—it’s not made with a traditional horror movie audience in mind, even though I’ve seen it advertised before very more traditional horror films in recent memory. The 18 certificate is also very warranted. While I won’t go into detail about why it’s warranted, trust me, it has allowed Edgar Wright to make the film I think he really wanted to make; it goes a lot more “all-out” with certain sequences which I think if he had toned down to gain a wider audience might have caused the film to suffer.

The performances from the cast are also great. Terence Stamp and Diana Riggs are obviously brought in to act as throwbacks to the time period but they do give excellent performances. But the real standouts are Thomasin McKenzie and Anya Taylor-Joy who definitely should get Bafta nominations for these performances; they’re some of the best performances I’ve seen all year. The only other actor I haven’t really mentioned is Matt Smith who is definitely trying to broaden the sort of roles he’s taking since leaving Doctor Who, and I think this is definitely one of the most ambitious choices he’s made post-Doctor. I think it’s shown that he’s a lot more of a versatile actor than people had given him credit for. He actually is very good at playing the figure he needs to play at certain times during the film. Again, I won’t go in detail about what is going on in particular but, as a whole, I think he does give an excellent performance.

If there’s one more thing I want to give praise for, it’s this film’s use of lighting. Edgar Wright really understands that we absorb films from both a sense of sight and sound, and he perfectly uses both in this instance. Because the film is set in Soho, which had a bit of a reputation as a Red-Light District, the colour red is used quite a bit. Lots of reds, blacks and dark blues are often used in the colour schemes of scenes, and to very good effect—they give almost otherworldly images at times. If there’s one thing I will say about this film that I didn’t like, it’s the fact it was a little too jump scare-heavy; there were certain times were I thought the film didn’t really need it. The most effective moments were the longer, more drawn-out segments, so the jump scares for me just didn’t work as well.

Edgar Wright has really convinced me that he can do no wrong with his filmography and Last Night in Soho is not a stumble; it’s one of the best films I’ve seen all year. It tells both a touching yet horrifying story if that was even possible, and I think if nothing else it does feel like a passion project, not something that was made to tick boxes. I do wonder how this is going to go down with a mass audience since I think people might be surprised by the film they’re getting, but I think if they’re willing to give it a chance they’re going to get something great out of it. The performances are great, the effects and lighting are great, and I think the writing really excels. It’s also a great send-off for the late Dame Diana Riggs as I think this was her final performance, and the film at the start is dedicated to her. If you like good psychological films, this one is one for you.
Calvin – Nerd Consultant
Share This Post: