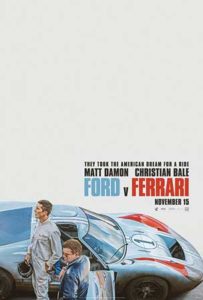 Le Mans 66, or as it’s known in America, Ford vs Ferrari, which is also what its listed as on IMDB, is 20th Century Fox finally doing the story of Carrol Shelby and Ken Miles’ historic run at the famous Le Mans 24-hour race. 20th Century Fox has been kicking around with the film for a while but it’s taken James Mangold as the director (last time I spoke about one of his films, I was reviewing Logan), and the final decision was to have Carrol Shelby played by Matt Damon and Ken Miles played by Christian Bale.

When I first heard this film was coming out, I was a bit skeptical at first. But I thought if anyone can make it work, it’s the director of Logan. However, I also had a suspicion that it was only going to be car fans and people that watch Top Gear repeats on Dave and the Grand Tour on Amazon that would get half of what was happening.

Carrol Shelby is not that hugely known of a figure, although the work he did for Ford resulted in some of their most major successes to such an extent that Ford named the last Mustang before he died after him. But that begs the question, how does this film rack up? Well, as expected, the film is a loose biopic of how Ford wanted to buy Ferrari after Ferrari refused an offer to be purchased by Ford and then used that to jack up their price before being sold to Fiat. After feeling the insult of this, Henry Ford II, played in film by Tracy Letts, commissions Carrol Shelby’s company to create a car that can beat Ferrari at its own game at Le Mans. At the time, Ferrari had won four of the previous five Le Mans 24-hour race, and Shelby insists on bringing on racing driver Ken Miles to be the GT-40’s driver.

Despite the fact that this ad campaign has highlighted Carrol Shelby more than Ken Miles, I think of a film about Ken than it is about Shelby. Ken takes off a lot of the focus and a lot of the emotional weight is on him. This is backed up by an excellent performance by Christian Bale in this role. It’s actually a rather interesting movie. It does seem to be a good film that will have a great balance between racing enthusiasts and people who like cars, and your general cinemagoer, since again, this is framed as being a pretty stereotypical sports movie. You don’t go to a film like this and not expect that. But it did get down how clever Carrol Shelby is as a race car designer. He brought in all of his experience before his heart condition forced him out of the game, and he put that love and passion into every single thing he did, truly one of the great car designers of our time, and the film maintains that legacy.

Le Mans 66 also rather ingeniously has great writing and a great repertoire between its entire cast, and the cinematography and sound editing in this film is amazing. You really feel like you are there on the course. I don’t know how much Ford approved of this film considering that they do not come out looking good in this film; that’s something that genuinely surprised me. Obviously, there’s no mention of the fact that Henry Ford I was a vicious anti-semite, but they don’t exactly pull their punches. The ad campaign gives this idea that Ford are going to come off as the good guys, the plucky people that just want to get back at Ferrari and knock them off their pedestal, when in reality, it’s everything that Ken Miles predicts at the beginning of the film, that the film does come to pass. And these bright and talented individuals are being held down by internal bureaucracy.

This is one of the things that I think is a bit of an issue with the film, since there’s so many antagonistic forces. In fact, for a film that’s in America entitled Ford v Ferrari, Ferrari doesn’t actually factor into a large portion of it. If anything, a large majority of the film is kind of Ford v Ford. I think this was a wise decision though because in a sense, as Film Brain pointed out in his review, you can’t portray the largest car manufacturer in America as the underdog. It’s just not gonna fly. And for the most part, I think they struck a middle ground quite well. I think the biggest problem I have is that, for the film that feels very real and very human, only a typical sports film at first, it kind of then gets to a state where you go, ‘Are you sure this happened in real life? I’m starting to have my doubts.’ But I suppose, if you look it up, it was kind of true to an extent. But again, your suspension of disbelief might be a bit tested.

The film actually has an excellent selection of performances, including Jon Bernthal in a role that starts out very prominent but then gets further and further out of the film as it goes on, and Caitriona Balfe and Noah Jupe as Ken’s wife and son who actually have excellent chemistry together and made me believe this is a real genuine family. Josh Lucas plays a pretty excellent overly stuffy bureaucrat for Ford. If you want to watch a film with excellent performances, this is actually a fantastic cast all round. But where this movie truly shines is in its race sequences. The emphasis on speed is amazing and the way it’s shot is excellent. As a result, I seriously got into some of these scenes.

I saw the film in IMAX and it really is the prime way you want to see this if you can; it’s one of those films that’s meant to be seen in that kind of format. However, if you don’t like the sound of revving cars, that’s going to obviously bother you. You might then want to wait ‘til this one comes out on home release because it’s frankly all over the place; this is a loud movie.

Le Mans 66 has been one of the most enjoyable films I’ve seen all year. It’s an excellent biopic with an excellent cast headed up by brilliant performances from Matt Damon and Christian Bale, brilliant direction and cinematography and excellent sound and editing design. I really hope the film gets a ton of nominations in the technical categories at the Oscars since on a technical level – it’s one of the best films I’ve seen all year. It doesn’t escape however that the film feels a bit bloated with a 2.5-hour runtime. And some bits of it feel a tad unbelievable, but it’s kind of the path of the course with going to this sort of film. I appreciate the fact that they actually put a lot of effort in to make it more sport accessible (by which I mean you don’t have to be Jeremy Clarkson to enjoy it). If you can seek it out, I really think it’s worth a shot. I reckon this film’s going to be doing a lot on the award circuit and it’s good for context when you’re getting round to watching the Baftas and Oscars. I really hope Christian Bale gets nominated for best supporting actor or best lead actor when the time comes.

Well, that’s it for me this week. Next week I go back to Disney as I review Frozen 2. With all that being said, thanks for reading this review. I hope you enjoyed reading it as much as I enjoyed writing it.
Calvin – Nerd Consultant
Share This Post: