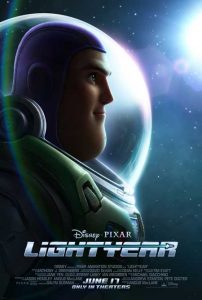 Lightyear is the latest film from Pixar, and it’s also another project that was delayed due to the COVID-19 pandemic. It also sees Angus MacLaine step into the director’s chair, a prominent animator for the company who previously directed some Toy Story shorts and was the co-director for Finding Dory, this being his first solo director credit.

Lightyear has been positioned as a sort of meta-textual film, it’s essentially a piece of fiction within the universe of Toy Story, acting as the inspiration for the Buzz Lightyear toy line. The film actually opens up confirming this, saying that in 1995 Andy saw a film about his favourite toy, ‘Buzz Lightyear’, this was that film. I actually thought that that was a nice touch from the filmmakers, I stated in my review that the reason that I didn’t connect with Toy Story 4 was because I had kind of grown up and I wasn’t the target audience. The filmmakers of the Toy Story films were very clever in making sure that it was updated for the generation that saw the film in the first place.

The idea of seeing another Toy Story film did not excite me, and this idea was a rather strange decision for me on Disney’s part, considering that they already gave an explanation for Buzz Lightyear’s character in an old cartoon, ‘Buzz Lightyear’s Star Command’, which ran for several seasons. I’m pretty sure it’s even currently available on Disney Plus. It seemed weird to completely reboot that idea! And just to let you know, this movie does borrow a few plot beats that that show had in its pilot. I actually would recommend checking out at least the pilot of that series, particularly if you liked this film.

Lightyear is a film about Buzz Lightyear (Chris Evans) crashing his Star Command colonising ship on a planet that is almost uninhabitable, and to get back they’ll have to achieve hyper speed since their old crystal that powers the ship is damaged in the accident. As a result, Buzz goes on several test flights, each time is only a few minutes for him but is four years for the planet below, so there is a need to get this done fast so that people can go home. I don’t want to go into too much detail describing the film since there is a lot of extra elements to this film which I think are best discovered by going to watch it, but if you are familiar with the Star Command cartoon, Buzz goes through a similar character arc that he did in the early stages of that. Though I will say, it’s not as if it’s a remake. For one thing, there’s not a diversity of different alien species in this one and most of the robots are very basic artificial intelligences, the exception being the robot cat assistant Sox (Peter Sohn) who often gets the funniest lines in the film.

That’s one thing that this film does well- it’s quite funny! I think a lot of people forget that Chris Evans is actually good at doing comedy and he’s also good at being Buzz Lightyear. He certainly isn’t doing a Tim Allen impression, but he does sound quite similar to him in a lot of ways, he definitely borrows a few of the vocal inflections.

The film also does well at being a kind of origin story, since this version of Buzz Lightyear isn’t exactly decked out with most of his gear as the toy in Toy Story and the film does a good job slowly compiling that.

Now, there isn’t a good diversity of species but it is a diverse cast. This is a very well put together cast, particularly Keke Palmer as Izzy and Taika Waititi as Mo. The film also has excellent timing for pride month, since it does a very good portrayal of a lesbian relationship0 something that got the film banned in several countries and they are now worse off for it, because I think that in terms of story structure, Lightyear works really well. That being said, if you’ve seen a lot of kids films, Lightyear follows a lot of the same plot beats. It kind of has to be a superhero origin story but at the same time, you kind of know there isn’t going to be sequels. It’s not as if they couldn’t do one, but it seems like the writers and director wanted this film to be a one-and-done. I think that this is a good decision, especially considering what they do with one character in particular. No surprises if you look at the iMDB page for this film, but Zurg is in the film, and the decision they make with that character (while it does raise a few questions) is actually an excellent idea. That being said, I wouldn’t describe Zurg as being one of the most nuanced villains- but it still is a good idea.

The animation is another thing we have to talk about, it has rather fluid movement and I would say the character designs do alright though it does have a bit of the uncanny valley effect to it- which is something that I’ve noticed in a lot of Pixar productions that have to do realistic or even semi realistic humans.

I think that one thing I’ll surprisingly say is that this film is quite good in 3D! I think that this is a film where the gimmick works really well. For example, in space flights, it really emphasises speed and flight, something that I’m not sure would translate as well in a 2D setting. Although if you can’t get into a 3D setting don’t panic, because I’m sure that this film will play fine in any case.

Pixar seems to be making a few ‘safe bet’ films.. This went through my head as I was watching Lightyear because it really was by-the-numbers in terms of story. At the Disney conference, the term ‘brand deposit’ is thrown around quite a lot, it’s most notably used for their live action remakes that have been developed in recent years- but Pixar does this quite a lot as well. It seems like most of their films are developed based on another established story or franchise, whether it needs a new entry or not.. So that they have more money and more freedom when they make the project that they actually want to make. Lightyear doesn’t feel like the most cynical of them- this is hardly a Cars 3 or Monsters University, but the point still stands. I could do a whole article about this, but for now I’ll just say that it’s becoming a bit more obvious that Disney is putting commerce before art.

Lightyear is a pretty okay film, I actually thought that it worked well overall. The casting of Chris Evans was a good choice and the cast overall is pretty good, but I’m not going to rush to see this again. I also wonder how it’s going to play down the line when both this and the cartoon are available on Disney Plus, however if you like the look of this film at all, it’s worth seeing it in the cinema and will be a good one to take the kids to- especially because the next Despicable Me film looks particularly bad.
Calvin – Nerd Consultant
Share This Post: