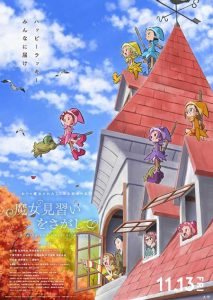 Yes, this is how I used my weekend: I went to see an Anime movie about an Anime franchise I barely watched because by the time it came to the UK I was really not the target audience for it. The thing is though, Magical DoReMi was a huge phenomenon in Japan. It was another show trying to do the “magical girl” series that had been popularised by a lot of previous entries, though most notably Sailor Moon. The biggest difference was that this was aimed to be more of a kids’ show, thus, unlike Sailor Moon where the cast was made up predominantly of high school-age protagonists, this one decided to go for a much younger cast, mainly to give a sense of childlike wonder. And it obviously worked because it stuck around for a long time, being very successful for Toei Animation, though up until now no major projects had really been done since 2003. In fact, the large time gap between releases is really reflected in the film itself. The characters are all in their early to late twenties to reflect the time difference between the final broadcast and this film, and the whole thing’s designed to feel like a reunion. Not surprising considering that the majority of the initial team is coming back, including one of the co-directors being Jun’ichi Satô who actually directed the first season of Sailor Moon as well. Though, in this case, he shares direction duty with relative newcomer to the role, Yu Kamatani.

Now, as I mentioned, I never watched this show all that much and I’ve only really started to learn more about it through my job, in spite of the fact I was watching a lot of Jetix at the time which was part of 20th Century Fox through their Fox Kids channel, localizing Anime to the West; their most successful of which was obviously Digimon and Shaman King. I do remember the adverts being on television but I never really watched the show. That being said, coming at it from that perspective I can tell you you do not need to be familiar with the show to watch this movie. In fact, the show itself kind of plays a minimal role; it only really comes into force at the beginning and kind of the end. And tonally it’s a very different show, this one more being a slice-of-life/finding-your-way-in-the-world story—there’s no villain, and the best way to describe it is as a soothing Anime. There is a term for it in Japanese which is used regularly by Anime fans called iyashikei (and since I voice memo record these and then they’re later typed by someone, I’ve just accidentally given someone way more work looking up how to spell that than I had intended).

In basic terms, it’s actually kind of a roadtrip film. It’s about four individuals coming to terms with their adulthood and whether they need to leave part of their beliefs behind. It mainly surrounds three women: Mire, a 27-year-old salary woman working for an imports company and being set up to fail by her frankly misogynistic colleagues; Sora, a student teacher that feels deflated after failing to help a child with special needs, thus resulting in him moving schools; and Reika, a 20-year-old part-time worker who ends up sending lots of her money to her boyfriend to launch his failed music career, and also has her own issues surrounding a disconnect with her father. The trio of them are all fans of Magical DoReMi, and by a chance encounter with a theme location based on the show end up meeting, forming a friendship and going on a couple of holidays together to unwind after being caught in their rut. It’s a film in a sense about finding yourself and where you belong in the world, which, alongside slice-of-life movies, always tend to be films I enjoy. If you like Studio Ghibli slice-of-life stories, this one might actually be up your alley. You’ve got to the enjoy the mundane though for it to work; there’s not really much of an overarching plot per se, more a series of mini plots that are sort of strung together.

I also like the dynamic between the main trio. Mire, Sora and Reika have a very endearing friendship, and the film has a very short amount of time to hammer that in with a total runtime of pretty much an hour and half, almost on the dot. And it does a pretty good job with these characters. The film does though really have a couple of issues; I wouldn’t be surprised if it turned out that this was meant to be a TV show and not a movie and it got changed at the last minute because it definitely feels like some aspects of the plot are not fully realised. For example, Reika gets a subplot that doesn’t really get a conclusion—which you think it would based on the way it’s played up—and it’s one that I think should have received one, and while many who have actually seen the film would say it does, I actually think it’s rather underwhelming and needed a bit more time. And there are a couple of other subplots. Mire kind of gets one, though hers at least has a lot more of a conclusive nature to it. Sora really is the character that gets the most closure by the end of the film.

Again, I have to repeat: the links to the TV show are very minimal; in fact, the animation is a very different style. Magical DoReMi went for a chibi, cutesy style of animation whereas this movie goes for much more realistic proportions and realistic features, a wise choice considering it does differentiate the fact that this is supposed to take place in what is essentially our world. Now, to be fair, this is a different team to the TV show but they’ve done a very good job of having the world look really beautiful; this has got great animation. I’ve actually been to several of the locations that feature in this film and it does a very good job recreating them. It also does a brilliant job of working in the two animation styles together whenever they have to share screen time which, granted, is minimal but still there. And if there’s one place where the film succeeds it is that the film has excellent character moments and development. There are a couple of decent laughs as well but you’ll be very aware of them if you spend a lot of time watching Anime.

But if there’s another thing I didn’t really like it was the fact that—I have to repeat myself—the runtime felt too short. This really needed to have at least a 2-hour runtime. And while the film does have somewhat of a conclusive ending in many regards, I wouldn’t actually mind a sequel to be honest because I think there are more stories you can do with this set of characters; the other reason is I actually really like these characters and I did end up relating to them on many levels. The film characterises them as super fans that really bring the messages of the show to heart, and while I never watched this show and I’m really not the target audience for it, I can really empathise with that given my own experiences. I do think they nailed an aspect of how fandom affects you, and it did a pretty good job with its message that while you do have to grow up on some level, it’s quite good to keep a bit of that childlike wonder with you for all time.

While you don’t need to be a fan of the original TV show, Looking for Magical DoReMi still has to be the sort of film you have to be in a certain mood to watch; it’s going for a very specific audience and you have to enjoy slice-of-life stories just going from day to day living. It’s a good holiday movie and I actually really enjoyed the character dynamic between the main trio who all had clashing personalities which nonetheless did very well together. And the chemistry between the cast members is great; the voice actor performances are all excellent in this. And I actually think the direction was very good, no surprise considering it’s Jun’ichi Satô, but Yu Kamatani is definitely proving to me to be a rising star in the directing department considering that he’s currently directing the ongoing Digimon Ghost Game series which has been very good from what I’ve seen. However, this was playing as a one-off in one brand of cinema and I don’t see it coming back any time soon. So, I would say you’re going to have to look out for this one on Blu-ray if you want to see it because I don’t think this will come to any streaming services; though knowing Funimation’s relationship with Toei, it wouldn’t surprise me.
Calvin – Nerd Consultant
Share This Post: