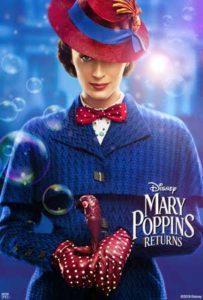 So, you’d think, despite the fact that Disney is known for sequels they would have by now got around to following up on Mary Poppins, considering the fact it did have sequel novels and other stories to work from. But, no, it’s pretty much been nothing since the 60’s.

Look, I’ll be honest. I am the worst person to review Mary Poppins because on the one hand I have no bias going into the film, but, I also have nothing that is objectively invested in the film. I hold no nostalgia for Mary Poppins and I am not a huge fan of the original film. If anything, the thing that had me more invested in the film is the movie Saving Mr Banks, which is a pretty decent Biopic about the making of the film.

Mary Poppins Returns seemed like a weird idea to me. Though I was intrigued by the casting of Emily Blunt in the lead role as well as Rob Marshall being appointed as Director, the man behind Chicago. Disney obviously brought him on board after he did Pirates of the Caribbean 4.

The film is taken place several years after the events of the original Mary Poppins. The children Michael and Jane have grown up. Michael has a family of his own which he is struggling with, since the death of his wife. Mary, now played by Emily Blunt, comes back into their lives in order to take care of the children, in lieu of the fact Michael is going nuts trying to find his father’s shares in the bank so the house doesn’t get repossessed by the bank owner, played by Colin Firth.

Look, here’s the fact of the matter. Mary Poppins Returns is a film that might have flown back in the day but doesn’t fly now. This is a film that is seriously in need of some Ritalin.

You can really tell it is a Rob Marshall film, as it shows a lot of his strengths and also weaknesses. The strength being; the man knows how to direct a set, knows how to do cinematography very well, and he brings a lot of his excellent style which he used in Chicago to this film. I will say nothing into the choreography of the musical numbers. The set design is really good, but, it is obviously a set or a green screen. Mary Poppins Returns is never allowed to feel like an organic world. In fact, the most organic the film feels is during an animation sequence half way through the film which is obviously meant to replicate the similar animated scenes from the original film. The animation style did remind me of Basil the Great Mouse Detective and 101 Dalmatians. They even tried bringing back some nostalgia by having the penguins from the famous Supercalifragilisticexpialidocious sequence. Admittedly they do a very good job of making the actors seem as though they are a part of the animated world, that’s the most I can say about it though. The rest of the musical numbers really feel like they are in a devoid negiverse. I know they’re implying these are all parts of children’s imaginations but really it goes a little too far.

The film is at the most at the expense of the plot. The plot of this film is so basic and bare boned that it might as well be a remake, I’m not even kidding. The fact that it’s a grown-up version of the kids from the first film might as well mean nothing. Mary barely interacts with them and considering what a big part of their lives she was that seems odd. In fact, after Mary arrived Michael and Jane feel like very incidental characters. Jane especially is really odd, she has barely anything to do in the film, it is a huge waste of Emily Mortimer.

Before you say anything, I am not a big fan of any of the child actors. They are trying their best and they do sell the whimsy of the scenes but if you are the sort of person that is annoyed by child acting this is not going to be the film to change your mind. Stranger Things this ain’t.

Disney clearly got out their cheque book for this film because there is an all-star cast. There’re cameos from Angela Lansbury and Dick Van Dyke, not reprising his character from the first film. We also have other actors such as Meryl Streep in briefly. Julie Walters also gets a role where she is allowed to be funny. Ben Whishaw is one of the best actors in the film. David Warner also has a small part.

As I mentioned, Dick Van Dyke’s character from the first film doesn’t make a re-appearance. This time he is replaced by a lamp lighter, who was under his apprenticeship, named Jack, played by Lin-Manuel Miranda. Oh good, we’ve gone from an Australian playing a cockney to an American, at least he can kind of, somewhat do the accent. The marketing hasn’t really lied, he’s much more prominent in the film than a lot of the other main cast. Further cementing my opinion that this film is aiming to be more of a remake than a follow up.

The plot is so basic and so neglected that the musical numbers also have to make up for it. You know when you watch an action film and it feels as though it is never stopping to take a breath, that’s the kids version of this film, it never takes a break. There is hardly ever a slowdown. It is several musical numbers with barely any plot thrown in the middle.

I will say one of the best parts of this film is Emily Blunt as Mary Poppins, who does nail the role left over from Julie Andrews, you will be upset to hear unfortunately she does not have a cameo in the film. In fact, I wouldn’t be surprised if Angela Lansbury’s part was supposed to be filled by her. Despite her saying in interviews that she read the books in research for the role rather than seeing the film, she definitely has the spirit of the character and is clearly doing her upmost best. This casting was definitely not a poor choice.

The green screen effects are obviously an improvement from the original films effects but as I mentioned before, because we are living in an age where computer effects are not much of a marvel, there’s no real sense of wonder from it. Hence why I think there has been an increased number of musical scenes.

Speaking of which, yes none of these are sounds from the original. The entire soundtrack has been rewritten for this film. This was always going to be a tough challenge. Considering that the Sherman brothers did an amazing job with the first one and it was one of the films that earnt them an Oscar. Whether you like it or not the Sherman brothers did compose an iconic soundtrack with the original Mary Poppins. Returns has been taken up by Mark Shaiman who did tracks for; Hairspray, The Adams Family and Southpark: Bigger, Longer and Uncut, to name just a few. He’s doing his best but, god all these songs fell out of my head as soon as they went in there. I have taken a bet on which song I suspect will gain the Best Original Song nomination. Spoiler alert- I reckon it’s going to be the last one.

I’m not going to lie; Mary Poppins Returns was an exhausting movie. This film is a whole lot of nothing really pieced together, with a bare minimum of musical numbers and feels more like a follow up. It does make me wish that some real extra effort had been put in place, and I’m someone that didn’t really enjoy the original film all that much, so god knows how annoyed fans of the original film are going to be.

If you like the classic Hollywood musical this one might actually appeal quite well to you, since it feels like a return to form for that, but god if you’re not into that this film’s really going to drag. Its good cast feels wasted in the film and it is a real shame too.

My cousin also went to see Mary Poppins Returns, after I had but before hearing my opinion. Now she is a big fan of the original and she was really excited to see this film, she even pre-booked her tickets which she has never done before. She was very disappointed and pretty much agreed with everything I have said. She was happy to see Dick Van Dyke back, even if it was as a completely different character and Angela Lansbury was also a memorable character for her, making the final scene her favourite part of the film. All in all, she was disappointed with Mary Poppins Returns and much preferred Aquaman which she really didn’t think she would as it isn’t her thing and only went as she was dragged by her friend.

With all that being said, thanks for reading this review. I hope you’ve enjoyed reading it as much as I’ve enjoyed writing it.