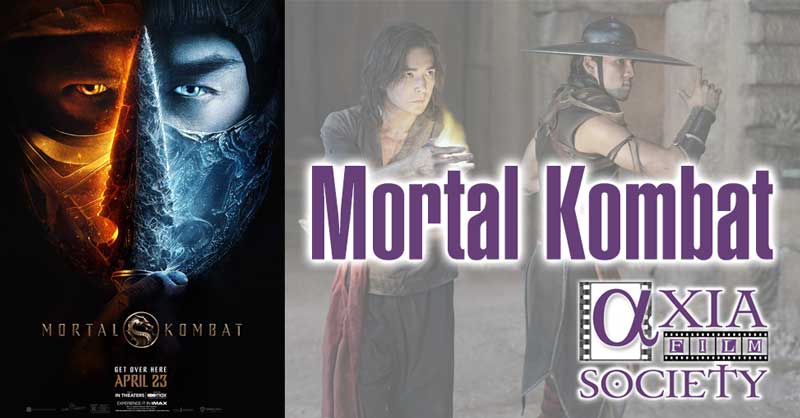 Well, last week was the final week of lists. As of this point, I’m only going to post something if I have something to review, particularly in light of the fact that cinemas are coming back in the next couple of weeks. I intend to aim to get a consistent schedule of film reviews out. If necessary, I’ll be filling in the blanks by doing some catch-up reviews of some films that went directly to streaming services rather than their cinema releases.

Mortal Kombat is a fairly recent release; it feels good that this film has finally come out. It feels like forever that a new Mortal Kombat film had been in development hell. The project had been passed around with various individuals involved, James Wan finally getting the go ahead to make this new film as the producer and bringing on director Simon McQuoid. Though, really, Greg Russo is really a big part of this project as well, coming on to write the screenplay and develop the story. Greg Russo is an interesting choice given that he’s not the most experienced of writers but clearly has a love for videogames. He’s even been penned to write the script for the upcoming Space Invaders film.

Now, if you’re familiar with Mortal Kombat, the plot is virtually identical to the videogames: The thunder god Raiden summons a group of champions to defend Earth from the forces of Outworld led by Shang Tsung, who in this version is played by Chin Han, in a tournament known as Mortal Kombat. If Earth loses, Outworld is completely within their rights to invade. The plot is in many ways quite similar to the film from the 90s, the big difference being this one now has an R-rating, Jax has something to do this time, Johnny Cage isn’t in the film unfortunately, and Liu Kang’s role has been rather downgraded. He’s not the main character this time; that role goes to Cole Young played by Lewis Tan, an MMA fighter who’s been invented entirely for the film.

Cole was an interesting character and the choice of his inclusion is a rather interesting one. This film’s done a very good job actually getting actors of the nationalities of their characters, and it’s definitely an issue that Warner Bros got cold feet and didn’t believe that they could sell a multimillion-dollar film on an Asian lead—which is unfortunately still kind of a believed practice for Hollywood—because Lewis Tan is an actor of Chinese descent and he’s also playing an Asian character. So, as a result, on that basis you kind of wonder why you’d invent a character and not give the star role to Liu Kang, who is in this film played by Ludi Lin. But when I actually finished watching the film, I actually thought they made a wise choice. Liu Kang to me has always come off as a rather dull and ancillary character. Some of the games develop him quite well but he’s never been that interesting, whereas Cole has a lot more at stake for his role—he has a family to protect and he builds good connections with his fellow chosen one, Sonya Blade, who’s played by McNamee. Kano is played by Josh Lawson.

If there’s one thing I think this film really does well it’s the back and forth between the characters; I think they nail that. What I also think they nail is the gore. Let’s be honest: the real reason we all wanted a Mortal Kombat reboot is that none of the films up to this point nailed the over-the-top fatalities and the sheer blood and guts that the games give you. The R-rating for this film means they can go all out with it and they absolutely do. There are actually some very good special effects for these sequences which is a bit of an issue when you realise that not all the special effects hold up very well. I’m particularly looking at the computer effects they used to make Reptile: while his fight scene with Kano is really awesome, it definitely didn’t look like a lot of the budget when to rendering him. Some of the effects though are pretty decent. Again, the gore works well and it’s very clear that’s where the budget went.

And, again, there’s a decent selection of characters this time around. Some of the favourites aren’t here—Johnny Cage is missing and he’s probably the biggest absence; Shao Kahn who’s basically the main villain of the entire Mortal Kombat franchise isn’t around, but I wasn’t expecting him to turn up in the first film as Shang Tsung was always going to be the main villain. Kind of also there was Sub-Zero who always fulfills a major villain role this time around, and most of the others are kind of nitpicks that didn’t really make appearances, a lot of characters that could easily turn up in future films like Kitana or Nightwolf, etc. The problem I have with the villains, particularly with Shang Tsung, is that they’re trying to go for a rather menacing villainous plotter with tons of power that’s being built up for a big moment, but he doesn’t really do much in the film. Shang Tsung is supposed to be a very menacing plotter and they definitely get that down but I think the director was not willing to have Shang Tsung emote too much, not something he’s exactly known to do in the games so it’s a rather bizarre choice.

I also think this is a film where its second half is much better than its first half—the first half feels like a bit of a drag at times because it feels like they’ve really slowed down the film to get everyone on board, and I don’t think that was the worst choice but I think it goes on a bit too long. In fact, the climax—which is the best part of the film—feels almost like it’s too soon, and as a result this film feels a lot shorter than it actually is. Including credits, it comes in at an hour and 50 minutes but it feels like it goes by very quickly. They are also definitely building up this film to be the beginning of a franchise. While it is self-contained enough that it’s not a total disaster in this regard, it definitely feels like it’s sequel-baiting a lot. But the fight scenes look cool, they’re very well-choreographed and all the actors can pull them off, and it looks completely like Mortal Kombat; they nailed a lot of the effects very well to make the fighters look distinct. And I actually think the music score is excellent, really putting in moments of that iconic theme. By the way, the updated techno remix that’s been made for this film is awful. That theme was perfect; it did not need whatever the hell was done with this one.

Mortal Kombat is a perfectly fine film and it’s probably actually the best of the bunch so far because it nails the look, the fights and the feel of Mortal Kombat, but it definitely feels like a film that’s building more to being a franchise than to be its own thing. It has amazing fight scenes but a first half that drags the plot and a climx that feels like it’s come way too soon. There are some nice little Easter Egg references for fans of the games in there, but I would say overall the new Mortal Kombat is a good film when you get down to it but a bit of a mixed bag when you actually really analyze it. Still, I actually do hope this gets a sequel down the line.
Calvin – Nerd Consultant
Share This Post: