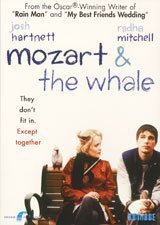 “MOZART AND THE WHALE”

Until an aspie friend brought the 2005 aspie rom-com“Mozart and the Whale” to my attention I was entirely unaware of the film. She had discovered it for herself during her extensive reading around the topic of autism.

At the time of its cinema release it made very little impact and even today it has a only a small web footprint; for instance at the Rotten Tomatoes review accumulator it has only three Critic Reviews, remarkably few for a film with two moderately well-known stars, Josh Hartnett as autism activist Donald Morton and Radha Mitchell as musician Isabelle Sorenson.

So to the film itself: “Mozart and the Whale” is a fairly successful attempt to shape a gentle romantic comedy around a couple with Asperger Syndrome. Donald is a struggling taxi driver whose monologueing and savant skill (he sees mathematical patterns so often and in such visual detail that it distracts his attention) intrude into every aspect of his life. He has formed a self-help group for other “excluded” people – not all of whom are on the Autism Spectrum – to which one day comes Isabella.

The story is almost entirely about the often-difficult relationship between Donald and Isabella and with the interplay within the self-help group, and the film deserves praise for allowing a group of neurodiverse characters to carry almost the entire narrative.

Nevertheless, there’s a definite problem with the film and it lies in the screenplay itself: Donald, the main male character, has been written not so much as a rounded person with Asperger Syndrome but as a bundle of autistic traits with not much of a real character tying them together. Savant Skills? Check! Special Interests? Check? Compulsive Behaviour? Check! Gaze Avoidance? Check! Social Difficulties? Check!

The film is loosely based on the story of autism activists Jerry Newport and Mary Meinel, both of whom have the savant skills given to Donald and Isabella. That said, I do wish that filmmakers and screenwriters would get past the belief that savant skills are universal amongst autistic people. My own experience is limited to people with diagnosed Asperger Syndrome and the nearest any of them comes to savant skills is strong visualisation abilities and visual memory.  I myself have no savant skills whatsoever, and the nearest thing that most aspies I’ve met have is the ability to hyperfocus.

It does become a bore to be asked can one immediately “see” the number of spilled matches on the floor or the day of the week on which someone was born from the date alone, almost as big a bore as the nearly inevitable response when one explains that one is autistic “Oh, you mean like Rainman!”

Isabella is less of an autistic cliché than Donald– yes, she has savant abilities, musical in her case, she can’t stand sudden metallic clatters – me neither – and she lets out an explosive single “HAH!” laugh at anything she finds amusing, which reminded me to distraction of Yul Brynner as the King of Siam in the old 1950s musical “the King and I” but she is shown as a woman with friends who holds down a job she enjoys and is happy enough to be her aspie self and ignore what other people think she should be.

As much as Donald is withdrawn and unadventurous and desperate to pass as neurotypical, Isabella is pixieish, perhaps a little too headstrong and individualistic, and is usually up for adventure.

The plot in essence is “will they? won’t they” and I’m not going to spoil it for you by telling you which.

Directed by Norwegian Petter Næss, “Mozart and the Whale” is rather cool and fractured in tone. It was originally scheduled to be directed by Steven Spielberg, and might have benefited from a little of his sentimentality, which might have made it a warmer film.

Don’t get me wrong, this isn’t a bad film – if it had been made in 1975 or 1985 it would have been a huge step forward in portraying those of us on the autistic spectrum as people not problems, and in a cinematic world where all kinds of autistic people are usually presented as tragic and freakish at best, its humanity is still exceptional today. It’s a watchable, often touching, sometimes funny film with flaws.

Imagine happening upon a good made-for-TV “issue” movie on a quiet evening and finding yourself interested enough to watch it to the end and not feel disappointed and you have the measure of “Mozart and the Whale”.