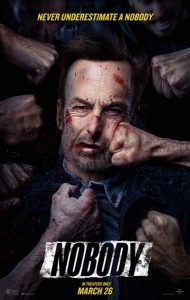 Nobody comes from writer and producer Derek Kolstad who was one of the writers on the John Wick films, and is directed by Hardcore Henry director Ilya Naishuller. The film serves to be pretty much an action film developed for Breaking Bad star Bob Odenkirk. The film centres around him playing a veteran and family man, Hutch Mansell, who after putting up with the monotony of his life has his house broken into by a pair of burglars, and, eventually, after his daughter’s cat bracelet is taken by accident by the burglars, decides that he’s had enough and wants to take back what’s his. However, by doing so he gets into a bit of a situation and ends up pissing off the wrong people. Long story short: now there’s a big Russian mafia out for him. But it turns out he wasn’t just any sort of soldier; he’s what’s known as an “auditor”, which in his words were the last people you’d want to see turn up at your doorstep because it meant you were dead.

There’s a lot to talk about in this one, but in reality it’s very similar to John Wick, not surprising considering that, again, this was written by Derek Kolstad. But it’s unmistakably also visibly similar to that of John Wick. They even kind of hint at this idea of a very secret society that exists almost parallel to our own, with mysterious characters like The Barber who’s played by Colin Salmon. It doesn’t really dive into it as much as John Wick, however. Now, in John Wick’s case, those films do a very good job with their world-building: the first film keeps it rather conservative with how much it reveals and then the later films tend to expand on it. But if that’s the plan, it might be a bad one considering that I’m not sure Nobody’s going to get a sequel given its ending. If there’s one thing I can definitely credit the film for it’s that Bob Odenkirk is very good at appearing like the average person, the everyman who you’d spot in the office. I mean, we know he can obviously do menacing because, again, he was Saul Goodman. But it is a bit of leap for just how destructive he is, and the film really builds up the idea of him just looking for an excuse to snap and go back to being able to beat the living tar of anyone he wants to. There’s actually some very interesting editing early on which I think highlights this and really gets down the absolute bore and inanity of the everyday, doing the exact same routine again and again.

Okay, and also credit to the direction of this film—the action scenes are alright. However, they don’t have the excellent choreography and stuntwork to the same degree that John Wick or even the director’s previous film Hardcore Henry had. There are also a few smaller roles down the line: a man on the other end of the intercom who’s played by RZA, and Christopher Lloyd plays Hutch’s father which might be one of the best things about this film. Trust me, he steals it in the final sequence of the film; in fact, the final sequences are actually excellent as a whole. But if I’m going to make the comparisons with Wick, another thing is that John Wick is a sympathetic character in the first film; the only reason he’s returning to the life he left behind is because he’d been traumatised and didn’t know what else to do, and the people that had wronged him had done something monstrous to him. You kind of wanted to see him mow down the bad guys. Hutch is just not as sympathetic. Yeah, you get a sense that he wants to do right by his family and that’s his core motivation, but you also get a sense he’s a bloody psychopath that could have done this anyway and was just looking for the excuse. As a result, he’s ironically a less interesting character. It kind of comes down to which you prefer: the character who has something to lose vs the character who has nothing to lose?

The thing is also that this film’s a lot less believable. I can kind of buy an underground world of assassins that have an honour code and bureaucracy away from the rest of society. That’s kind of buyable in my opinion, especially considering a lot of the revelations around criminal networks that have been discovered in the last few years, something that the John Wick films actually tap into. Nobody, on the other hand, has to have me buy that the US government is training super soldiers that can maintain their skills and be killing machines well into the later years of their life, and it can be kept so secret that barely anyone knows about it. Here’s the thing I have to tell all people that believe in conspiracy theories: world governments can’t cover anything up! Every example you’re about to give to refute that statement is proof positive of that because we know all about them; they always get out. The American government couldn’t keep a surveillance network of our emails from coming out or even that the President of the United States was having an affair with an intern! What chance do they have of covering up a load of super soldiers? In fact, this world kind of has to buy into the idea that Edward Snowden wasn’t a thing because I think if this was reality you would have thought an Edward Snowden or a Julian Assange would have leaked it.

See what I’m getting at with why John Wick worked a little better? You didn’t have to buy into multiple cover-ups, more the idea that for a general public and law enforcement it was more comfortable to just leave them to their own devices, and they had the money to buy their way out of any situation if necessary. In fact, the code and credence of the organisation was more to just keep things the way they were, something again which is true in the real world. You can read The Rich List all you want but most of the richest and most powerful people actually pay tons of money to remain anonymous. It’s why you know that Donald Trump isn’t a real billionaire because real billionaires don’t host game shows, as Mitch Benn put it in one of his videos on YouTube. The point I’m getting at as well is that if you really think a lot about Nobody, it doesn’t make much sense and expects you suspend your disbelief a lot more than I was able to. I also think it’s interesting that a lot of the side characters are just very trusting of Hutch, in a way they probably shouldn’t be.

That being said, I didn’t think Nobody was a bad film. In fact, if anything I actually think it was an okay movie, just incredibly average. It’s a very good action film all things considered; with this team you would expect that to be the case. But the thing that came to my head was that I really hope this means we’re eventually going to get a John Wick 4. Bob Odenkirk is fine in this role and the side cast do a decent job in their performances, though I think the villain is a little too over-the-top for my liking. If you feel the need for an action film in the cinema, this might be worth going back for, but otherwise there are better things playing now that are worth more of your money.
Calvin – Nerd Consultant
Share This Post: