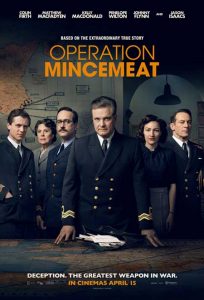 Operation Mincemeat is the latest film from director John Madden who previously helmed Shakespeare In Love and The Best Exotic Marigold Hotel, among others. It tells a rather interesting story from World War 2, the operation in question was an intelligence operation rather than a military one. The film is telling the story of how British Intelligence at the time wanted to convince the Nazis that when the invasion of Europe would begin, the target would be Greece, not the Italian island of Sicily as everyone had predicted. In order to do this, they took the corpse of a Welsh homeless man living in London at the time and gave him fake documents, dumping him in the ocean of Spain in the hopes that the documents would be passed on to Hitler’s high command, thinking that he was a genuine officer that had drowned as a result of a plane crash- making so that troops would be moved over to Italy and the invasion would begin with minimal opposition. They didn’t just give him documents either, they had to develop a whole backstory for him, write letters from loved ones, genuine new IDs.. it was a massive process, and it didn’t have a guarantee of success.

This was a film I was actually very keen to see, in my opinion it’s one of the most interesting missions from World War 2 and I was interested to see how it would transfer to screen.

The film in question centres mainly around three individuals that were involved with the actual operation. Ewen Montagu (played by Colin Firth), Charles Cholmondeley (played by Matthew MacFadyen), and Jean Leslie (played by Kelly Macdonald). The film also takes a look at what was going on in their personal lives while this operation was being carried out- through the various planning stages and the execution of the actual drop of the fake documents and the body.

I will say that this film does a pretty good job detailing how risky this operation was- it had every chance of going wrong and being a total disaster. The film really succeeds in getting the fascinating history behind it. I am familiar with some aspects of the historical context, however this film I suspect is being a little loose with history.. They get the dates right, this film is set in 1943 and the whole thing would be about a year before the events of D-Day, for example, and most of the individuals involved are accurate. But there’s other aspects of the film where I wonder how accurate it all is. I know these films often play fast and loose with history in order to have a good narrative, you see a film like The Imitation Game which historians have said has overplayed Alan Turing’s contribution to the effort and ignores many other individuals involved with the project around that time. But I’m not really in a space to comment on it.

While there’s a lot of really interesting drama in this film, including a subplot around Charles working to get his brother’s body sent home so his mother can grieve properly, there’s also a love triangle subplot which I really felt dominated too much of the film. I was thinking ‘do we really need to spend so much time on this one?’ most of the time.. It really took away from the genuinely interesting aspect of the film; the operation! When we go into that and all of the effort it took to get that to work, the film works really well. The film doesn’t work so well with this romance subplot, it feels like it’s just drama for the sake of drama. It’s not really that convincing, and it’s not helped by the fact that we know Colin Firth’s character is a married man, we see his wife and children at the start of the film when they leave for America as a precaution, since he fears in the event of an invasion of Britain, his wife would be on Hitler’s radar, given that she is of Jewish descent.

There is certainly a good amount of drama there but unfortunately I don’t really find it convincing. The actors don’t really have a lot of chemistry and it stops me from buying into it.

The performances though, are actually really good! Colin Firth for whatever reason seems to be being cast better in recent times, and he seems to really be stretching a lot more of his range. It is rather similar to some recent roles he’s done, but as a whole I think he gives a good performance.

I will say Matthew MacFadyen is probably the stand out performance for me in this film, he did a good job playing the general who wears his heart on his sleeve. Kelly Macdonald is also excellent in her role, but I think another excellent actor is Penelope Walton- it feels like she’s been given a much more significant role than is usual for her in a film like this.

The film also has Johnny Flynn playing Ian Fleming- yes, that Ian Fleming: the author of James Bond! It’s actually kind of a running gag that everyone is writing novels around this time period in the film.

If I was to talk about the reason that there was extra drama added to the story for the films sake, it’s because I think they realised that the operation itself couldn’t really sustain the length of a feature film, and it was either overdoing this subplot or making it a TV movie. So, if it meant that this went onto the big screen I think that it was maybe worth it; this is a good film to experience on the big screen. There are some excellent shots in this movie, and that’s quite cool considering that this film has a budget where they are restricted with the amount of action scenes that they can do. There’s not really anything like that here, but they do an excellent job with what they have.

That being said, I’m not sure I can completely recommend going to see this in the cinema. The films actually shot quite dark at times, there’re many scenes where it’s not very well lit to keep it historically accurate, but I had to kind of squint to see what was going on- something I’m kind of getting sick of when it comes to watching films.

Operation Mincemeat is a fascinating bit of history and it’s told really well, but the film feels a bit padded, and the drama isn’t as convincing as I think it could be. It’s not the most cinematic feeling movie in the world. But, as a way of telling the story as it is concerned with the real-life event itself, it’s an excellent movie, and I really found myself enjoying those moments. If you’re not aware of this operation, I would recommend checking it out! Though I would say this isn’t something you should rush to cinemas to see, this might be worth waiting for a Blu-ray release, or for its inevitable addition to streaming services.
Clare Saunders
Administrative Assistant
Share This Post: