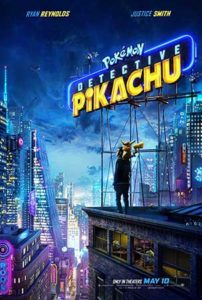 Anyone following this site for a while knows my real nostalgic love for Pokémon and with this being now the 22nd Pokémon film if we’re counting it amongst all the other Animé films then we’re heading towards this becoming a Bond style franchise. This is the first ever Western produced Pokémon film in live action and it’s not the fact that I wasn’t actually on board with the concept of the film prior to seeing the trailer. The trailers did convince me that there could be something in this.

In the director’s chair is Robert Letterman who was not exactly my first choice given his track record. If you look at his previous directing jobs, he directed the rather mediocre ‘Goosebumps’ film, the pretty poor ‘Gulliver’s Travels’ with Jack Black in it, ‘Monsters v Aliens’, which is a rather “meh” film and the god awful ‘Shark Tale’. So basically, any time he works with Jack Black he doesn’t make that many great films. In fact, this is his first directing job in 4 years.

If you are familiar with the game ‘Detective Pikachu’, the plot is very similar; a kid named Tim played by Justice Smith travels to Rhyme City to pick up his father Harry’s things after he is reported dead and he then discovers a Pikachu wearing a detective’s hat in the building, played by Ryan Reynolds, who tells him he has no memories and he wants to solve the case about where Harry is, believing that he is not actually dead, from there it goes into a being a real mystery about what’s going on, mainly surrounding this new gas that’s going around that’s a raging Pokémon. Detective Pikachu feels as though it does take place in the Pokémon Universe, there are several nods and winks to various aspects of the franchise. The Kanto and Shino regions are referenced, there are minor hints about the gym leader’s circuit and there are a couple of other nods to some of the previous games, leaving us to suspect that this does take place within the continuity of the video games. Rhyme City is supposed to be within the context of the Pokémon Universe, a more western style region, mainly akin to America, although again, speaking to my friends on the subject of this, it definitely seems as though they are aiming for a London aesthetic. There are certain streets that look like areas like Canary Wharf, or Camden Market than there are The Bronx and Manhattan and I’m saying that as someone who hasn’t actually been to New York yet.

If you are going into this film for a really big mystery, don’t bother, the villain is really obvious and it never tries to really do much of anything like that, although there are a few minor plot twists and revelations, but you will see most of them coming. That doesn’t take away from the film, however, because at the end of the day, it is a really great equivalent of a buddy/cop film. The low review scores have been really bothering me with Detective Pikachu because really this film is just really nice. It’s definitely a bit nostalgia bating, but it’s nostalgia bating in the best way possible, this comes from the problem that most of the press reviewing this film are not Pokémon fans, and as a result, Detective Pikachu feels almost as though it’s being unfairly judged because for Pokémon fans there is quite a bit to work with here, they play around with a few decent concepts and some of the Pokémon look really good, Pikachu looks like you could reach out and touch him although some of them appear to be overly CGI’d. Balbazar looks cute but he definitely doesn’t feel as much as though you can reach out and touch him and a few others are a bit like that. I think the biggest offender in this is Mewtwo and yes I’m not giving away any spoilers with that one, he was in the second trailer. Mewtwo does tie into the plot quite significantly but the Uncanny Valley is definitely an effect with him, and I know Mewtwo is an artificially created Pokémon so it makes some sense that he would look a bit weird, but again he looks way too much like an overly CGI’d creation.

The majority though, however, do look great. There definitely seems to have been real sport to this but some of the Pokémon sound a bit weird. Balbazar has lost his trademark noise for another rather weird one, which is a shame considering my nostalgia still has that voice from the animé stuck in my head and Psyduck has got a really weird voice, again probably because I’m used to the original one. Talking about the cast list however, Justice Smith is actually pretty good, the only thing I had seen him in prior to this was ‘Jurassic World: Fallen Kingdom’, where he didn’t give a very good performance but this time he has really allowed to prove that he is worth being in a leading role. I don’t think he is worth taking another chance on after this film. Ryan Reynolds once again does another scene stealing performance, it feels like people have now finally discovered how to use Ryan Reynolds properly in their films and when you’re watching it, you’re not too distracted by the fact that Deadpool’s voice is coming out of Pikachu although I’m looking forward to the jokes that I am going to get about this in Deadpool 3.

Now one of the biggest flaws as a Pokémon fan I have with this film is the fact that Detective Pikachu is rather lacking in the two things that are very much this idea of what we expect from a Pokémon film, which are battles and catching, there is only scene of Pokémon catching and there’s only one underground battle scene, this is because the plot of the film has Rhyme City being this idea that it’s where Pokémon humans live side by side and there aren’t catching and battles which again sounds great in theory but Pokémon aren’t just these creatures we like to look at, half the deal is the battling, the type advantages and that good stuff that comes with it and by doing a Pokémon film where they are not allowed to battle as much is a bit out of place. There is some good stuff, like the fights with the Greninjas are pretty good but it does feel as though it’s a bit lacking in that department, I certainly hope that there are plans for more films within this film’s continuity, we actually get a Pokémon story that is actually closer to what we would expect from Pokémon.

Ok, I’m stalling for time trying to be as fair as possible, but I really enjoyed ‘Pokémon: Detective Pikachu’, this is one of the best video game movies to date and although that bar is not exactly high, this should now be the standard that people look into going forwards, it certainly seems as though a few things are missing from the Pokémon experience but it still works very well to tell the story that it wants to tell. I haven’t even mentioned some of the rest of the really great cast, including Kathryn Newton, Bill Nighy, Ken Watanabe and Chris Geere. There are some very inventive uses for the Pokémon, and it tells a very different story that what we would expect, people like a decent side story and Justice Smith and Ryan Reynolds have excellent chemistry on screen, the special effects are really good, and I genuinely hope we get more films within this continuity. This is one of the few times I actually would like to see the spin out into the cinematic universe. If you like Pokémon you really owe it to yourself to see this film. Just be warned, as I mentioned there are not many battles and there is not much catching Pokémon, which is a shame because I wish there was more of that.

Well, that’s it for me this week, next week I’m doing a pure action film, as I’m going to review John Wick: Chapter 3.

With all that being said, thanks for reading this review, I hope you enjoyed reading it as much as I enjoyed writing it.
Calvin – Nerd Consultant
Share This Post: