Raya and the Last Dragon – Review 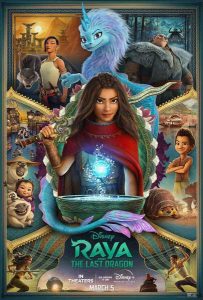 “RAYA AND THE LAST DRAGON”

Raya and the Last Dragon is yet another Disney film to come out within the last few weeks that is played on both Disney Plus and in cinemas as part of the Disney Plus Premium package and has also become available on Amazon as well. It had been out for a while before I actually sat down to watch it, and considering that my opinion of Disney is all over the place at the minute, I’ll say Raya is pleasantly pleasing in many ways.

The film’s plot revolves around a group of dragons saving the world from dark beings that turn people into stone, only to then disappear from the world and leave behind a sacred gem. The world then divides into several nations, the gem being guarded by the people of Heart while the other four nations try to gain control of it and the people of Heart try to bring people together. However, things get exacerbated when, during a gathering, the gem is broken and each of the nations take part of the gem, only to have the plague return. It’s up to the daughter of the chief of Heart, named Raya, to bring the pieces back together after successfully reviving the dragon Sisu who can bring the world back together and save it.

It sounds like a basic plot but, trust me, there’s a lot more to it. My goal with the plot synopsis is to not give away too much about the film. Raya takes a lot of inspiration from Eastern mythology, though it doesn’t really tie itself down to any one culture. There seems to be a mix of Southeast Asian countries like Thailand and Vietnam; there’s a bit of China in there, and Mongolian inspiration is also a part of it. I think we must get to the big elephant in the room: the comparisons with Avatar: The Last Airbender. Now, I’m not the first person to draw these comparisons. There obviously was the recent drama with Lindsey Ellis being hounded off Twitter for making the comparison, for stupid reasons because people perceived a neutral comment as being racist, but let’s not go too into detail about that. Trust me, it was really dumb. Watch her ‘Mask Off’ video—she does a good job explaining why it was dumb and gives her side of the story. To be fair, I think she definitely had a point about the fact that these two are very similar. She also mentioned in that video that the creators have repeatedly said that Avatar was not an inspiration but they don’t mind the comparison. Having said that, this is really a lot like Avatar: You have the four nations and the big MacGuffin that can unite the world. There’s also a good use of martial arts, though that reminded me a lot more of Shounen Anime than it did Avatar. But again, that show borrowed a lot from those tropes as well.

However, Raya definitely stands apart, mainly because, for one, it has a certain sense of authenticity that Avatar did not quite achieve because its entire cast is made up of Asian-American actors, and everyone delivers a fantastic performance. Kelly Marie Tran—who you’ll recognise as Rose Tico from the Star Wars films—does a brilliant job in the lead role. Gemma Chan, star of Humans, does a brilliant job as the antagonist Namaari, and Asian-American rapper Awkwafina does a good job providing the comic relief role in Sisu. I say comic relief because she’s also supposed to be the all-powerful character trope and her character did remind me quite a bit of the Genie from Aladdin, though with less shape-shifting. But there are other fantastic stars as well. Daniel Dae Kim is used along with Benedict Wong and Sandra Oh, who actually feels kind of underused considering that she’s come off another career-defining performance in ‘Invincible’.

The big difference is, unlike Avatar, with the exception of one nation, they don’t really nail down each of the nations to one particular culture. In Avatar it’s fairly simple: the Water tribes are meant to represent the Greenland Inuit tribes. The Earth Kingdom is clearly based on Chinese traditions in architecture, and the Fire nation is very heavily inspired by Japanese culture, which will be particularly familiar if you’ve played the game Ghost of Shushima on PlayStation. The Air Kingdom is based on Tibet, particularly the monks of the Dalai Lama, though a bit of the Shaolin monks’ mythology is thrown in as well. They don’t really do that as much; I think one of the nations is very much based on Vietnam, though they don’t make it immediately obvious, and one of the nations is particularly based on Mongolia. But they do a fantastic job. While the film doesn’t tie any of this down, it does make each of the nations feel rather distinct in several ways, and they do show off a lot of big open environments. Open-world video games definitely were a big inspiration in the making of the film, particularly in the early-on stages. And while we’re on it, I think this is one of Disney’s best animated films in recent memory; they do a phenomenal job with the animation. There are so many gorgeous sequences and the use of lighting is also particularly great. If anything, a lot of the scenes reminded me a lot of the Kung Fu Panda films which also do a great job with action and lighting. The film is quite good at moving from each of the nations to deliver a nice story, and I did like the way the story progressed and different characters came to different resolutions in their arcs; there are very good character arcs in this film.

If there’s any problem with the film it’s that they did skip ahead a few points, though not by much so I wouldn’t say it damages the film tremendously. They got an hour and 40 minutes to tell this story and they do a good job building characters. If anything, this doesn’t really feel like a Disney film until Sisu shows up; up to that point it feels like a different sort of film. It also doesn’t resort to the surprise villain that Disney films have been overly using recently (I think Disney is kind of getting the message on that one). That being said, I don’t want to give away too much because, in all honesty, I actually kind of really enjoyed Raya and the Last Dragon and did so in several ways. Those of you who don’t like musicals will be happy to know that this is not a musical; it doesn’t have any music numbers. Personally, I’m glad at that decision as I don’t think it needed it and I actually think I took the film a little more seriously because of it. It’s also another film that’s shown how Disney is doing a very good job moving to 3D animation, something that Ghibli seems to be struggling to do right now, and I hate saying that as a massive Studio Ghibli fan.

The big question at the end of the day is whether you should go and see this at the cinema or decide not to take the risk if you feel there is one (for example, you either live with a vulnerable person or not enough people in your inner circle have been vaccinated). If you’re not wanting to take the risk but you really want to see this film, this is worth Disney Plus Premium. However, I would urge you, if you want to go back to cinemas this is a good film to go back for since the colours and the lighting and the action will really pop out in that environment. And I also think the issue with seeing it on Disney Plus is you won’t get that effect unless you’re watching on a very big TV with very good resolution; I was very happy I got to see the film in the best quality. But if for example you choose to watch this film on a laptop screen, you’re not going to get the best of it, I’m afraid. However, do not let that make it sound like I’m bullying you to go and see this in the cinema—if you absolutely don’t want to take the risk, that is fine. It’s all the more reason to get yourself vaccinated at the first chance you get so you can feel safe in a cinema environment.

Raya and the Last Dragon is another excellent animated film from Disney. However, I don’t know how I’m going to feel after a second viewing. For example, people will know that I believe I should have reviewed Moana better than I did at the time. And also with Raya, I actually think this film is going to get better—it’s got a nice message, an excellent cast, and the animation is fantastic. It really is a film you should try and see, and I reckon kids will love it.
Calvin – Nerd Consultant
Share This Post: