Ready or Not – Review 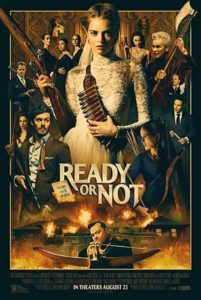 (It doesn’t matter how bad meeting your in-laws is or isn’t going to be, it won’t be as bad as this.)

‘Ready or Not’ is the latest film from directing team, Matt Bettinelli-Olpin and Tyler Gillett, the team that brought you ‘V/H/S’ and that terrible found-footage film, ‘Devil’s Due’. Though, luckily this time, they seem to be staying away from the found-footage genre, instead opting to do their own thing.

It’s kind of a strange film. I certainly saw lots of trailers for this and it does give you a sense of intrigue, but it didn’t look exactly like it was going to be a major deal. However, the casting of Samara Weaving definitely seemed like a good choice for the lead role.

How does it turn out? Well, if you haven’t seen the trailer, the basic premise of the film is that the lead character is Grace, played by Samara Weaving, who’s marrying Alex, played by Marc O’Brien, of the famous Le Domas clan. A family of them made their fortune through a board game empire. They have a family tradition that when a new member of the family joins, they play a game at midnight. But after Samara draws the card to say the game will be hide and seek, Alex reveals to her that it’s actually a big ritual, and they are convinced they have to kill her for this ritual.

Okay, this is a very thin premise, and if this film took itself seriously, it would’ve collapsed. Thankfully, the writers and directors knew very well this needed to be a dark comedy. Anyone that studies film will tell you that comedy and horror are strangely good together if you can get it right. Ready or Not is a prime example of where that can work. This film is nothing amazing but it’s not forgettable. It’s down to the fact that the cast have been given excellent direction. Not too many recognisable faces in this one, apart from Samara Weaving and Andy McDowell, who plays the matriarch of the family, probably one of the best performances in the film.

The film basically plays a dark idea on the basis that the scariest thing to do is introduce yourself to your in-laws, a theme that’s been covered in several other horror movies, most notably in Jordan Peele’s ‘Get Out’. ‘Ready or Not’ definitely owes itself to the horror film society, since a constant running theme seems to be the rich don’t live like us. Mark Kermode’s review also pointed out one factor that I agreed with – most horror comedies tend to lose their nerve towards the end of their films and just straight out become horror films, whereas Ready or Not blends its mix of funny and scary right up to the end and is all the better for it; it’s actually a constant tone.

Plus, it’s got some memorable characters in it. For one thing, I appreciated the brotherly bond between Daniel, who’s played by Adam Brody, and Alex. It’s certainly subtly brought up as the film goes on, but it’s not majorly necessary that they have to devote the entire film to it. In several senses of the word, people are going to find this film very weird, though. It’s certainly running to the beat of its own drum. That’s not to say anything in this film is very unique; it’s not like nothing in this film has ever been done before. In fact, it’s actually kind of reliant on tropes, and if you see as many horror films as I do, you’re kind of going to see everything that’s coming. Still, there’s not much in terms of scares, not even that many jump scares which I was actually expecting more of. Once again, this is down to the fact that this film knows exactly what it wants to be and sticks with it.

The biggest issue with the film is that the plot is rather guilty of spinning its wheels. Like many horror films, it has to come up with several excuses for how the main characters haven’t been able to escape the situation or why the film’s still going on. Luckily, it only runs for an hour and 35 minutes, and it pretty much does away with that idea entirely. If anything, it actually kind of finds its focus in the final part.

What is this film’s biggest strength? It’s ridiculously funny. I’m not joking, I laughed a ton watching this film. There are several funny moments in this movie, and the audience that I was seeing the movie with were laughing just as much as me, but also at the same time wincing at the gore. Oh yeah, this film’s got an R-rated in America and an 18 certificate in the UK for a good reason – there is a ton of gore. With the exception of one example, it’s not incredibly vomit-inducing, nor is it incredibly realistic. In fact, there’s very few noticeable practical effects that have been done, most of it seems to have been done through computer effects. That’s not a diss against computer effects artists, but as we’re becoming more and more film savvy, we’re starting to notice them more and more. Luckily, this film is not one which has the excuse of “well-it’s-cheaper-to-make-it-look-more-fake-so-let’s-not-bother”.

That’s the biggest thing about ‘Ready or Not’; it’s got a very good cast, some excellent performances and some genuinely good, intense horror moments, some of which reminded me of the video game, ‘Alien Isolation’, leading me to suspect that this plot could have made an excellent indie horror game.

But’s it’s also not exactly the most memorable film in terms of breaking any new grounds. At the end of the day, it’s just what I would describe as a pretty good film. That’s it. But right now, that was what I really needed. This film was actually a real breath of fresh air after going to the cinema for several weeks to see what turned out to be rather disappointing films that received a ton of advertising.

‘Ready or Not’ is a simple horror comedy that works to its strengths and doesn’t have too many weaknesses. The family dynamic is really hilarious, and the film goes completely nuts at several moments, including its final scenes. It has a tone and sticks with it. But at the same time, this is not a movie you need to be rushing out to see at the cinema if it isn’t your thing, but horror fans will likely get a real kick out of it. I actually think it’s worth a watch. Considering what’s out in cinemas right now, you can do a hell of a lot worse. I would even say that, for a couple of weeks, this probably will be one of the best things you can go and see in the cinema.

Well, that’s it for me this week. Join me next week when I’m doing another DC Comics adaptation review when I check out the film based on one of the most famous villains ever, Joker. With all that being said, thanks for reading this review. I hope you enjoyed reading it as much as I enjoyed writing it.
Calvin – Nerd Consultant
Share This Post: