Shang-Chi and the Legend of the Ten Rings – Review 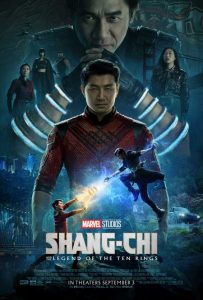 “SHANG-CHI AND THE LEGEND OF THE TEN RINGS”

Shang-Chi and the Ten Rings is the first Asian American led film in the MCU, taking lesser-known martial arts-based hero, Shang-Chi, and hoping to propel him to a bigger role. Marvel is very committed to this—the entire cast is almost entirely made up of Asian actors and it’s very much enriched by the culture it’s based on. Destin Daniel Cretton, who directed the films, Short Term and Just Mercy, was hired to direct. The cynical part of me really saw this film as a marketing exercise. Disney has been really trying to make films to appeal to the Chinese film market, considering that they are now the second biggest film market in the world (and this has been especially the case in recent memory). Have you ever wondered why Disney kind of gave up making Star Wars spin-offs after Solo: A Star Wars story? Well, while there’s the fact that Solo was rather disappointing in the box office, it’s also the fact that Star Wars wasn’t doing very well in China. It’s also one of the big things that propelled the terrible Mulan remake that went straight to Disney Plus last year. This one certainly is part of that marketing drive, though it at least doesn’t feel like any major censorship has gone on here, and it is very respectful to the culture. The first ten minutes, for example, are done entirely in Chinese and most of the film takes place in China.

I’m not sure at this point in time whether Shang-Chi and the Ten Rings is a filler Marvel movie or a much more eventful one; the film seems to want to go down both routes. But I will say it’s a very good origin story for the character. Shang-Chi played by Simu Liu, runs away from home and takes a job as a driver for a hotel, alongside his friend Katie, played by Awkwafina. Shang-Chi is completely rocked one day when his father’s organisation The Ten Rings, immediately goes after them and steals one of his mother’s pendants. The next target will be his sister Xialing, played by Meng’ er Zhang, unless he travels to Makow(?) to look for her and keep her safe. One of the things that surprises me about Shang-Chi is that it’s a surprisingly personal story. It probably has one of the better villains of the MCU. In this case, it’s Shang and Xialing’s father Xu Wenwu, played by Tony Chiu-Wai Leung. And the film strikes an incredible balance of keeping his motivations sympathetic but his actions unjustifiable. I won’t spoil it but the film does an excellent job with this and it’s amazing how well the character work was handled in this one. Initially, it didn’t feel very much like and MCU film but it definitely moulds more into that as the film goes on, though the introduction of Razor Fist into the MCU is probably the most Marvel thing in this one. He’s played by Florian Munteanu who played Drago’s son in Creed 2.

Now, Shang-Chi is not one of my favourite Marvel characters but the film does a very good job introducing this incarnation of the character, establishing his back story, and really giving us an idea of what the character is capable of. There are not really many super powers in this one; it’s definitely very martial-art focused, though obviously in a very exaggerated way (if there’s one film that it reminded me of very early on it was Crouching Tiger, Hidden Dragon). But it also does a good job with establishing the side cast, and it’s a very strong side cast. That’s definitely been something I think has been weak in some of the Marvel films but this one does a very good job of it. Xialing’s character would probably be the one that’s most changed for comic fans, mainly because she’s actually an amalgam of Shang-Chi’s five sisters all rolled into one. I personally thought this was a smarter decision—they probably wouldn’t have been able to get all of them into the one film and saving some of them for sequels would probably be a bad idea, plus the smaller family unit meant it could lead to a better dynamic as the film went on. This film has brilliant special effects also and the fight choreography is phenomenal; it’s a testament to the fact that the film is dedicated to one of the choreographers who has sadly died. The cast also gives excellent performances; there’s not a single bad performance. Actually, I think this is one of the better-acted Marvel films and it amazed me how well the direction was for all the performances; you can really tell a lot of love, care and passion was brought into the project.

Now, Shang-Chi is quite a bit longer than most Marvel films—it goes on for two hours and twelve minutes if you include the credits and both the mid- and post-credit scene (which still annoys me when people walk out before they play). It definitely felt like the film was going on a little too long by the end of it. I also think there are a few moments where the comedy doesn’t quite land; most of it does but there were a couple of times where I thought, “I’m not sure that worked out very well there”. There were also some very weird callbacks to a lot of moments in the Marvel Cinematic Universe, particularly Iron Man 3 since this film must pretty much retcon a lot of the plot elements of Iron Man 3 since the Ten Rings were invoked in that film, but obviously the way it was invoked in that one doesn’t apply to this. They have a good way of getting around it—it’s actually a retcon that I think works. Overall, there’s not really much bad I can say about Shang-Chi and the Ten Rings; it’s a very good entry in the Marvel Cinematic Universe and it delivers on taking a not-as-well-known character and propelling them excellently. I really enjoyed this film a lot more than I was expecting to, and I think it’s up there with some of the better Marvel films. The martial arts choreography is great; the story is both personal and well-done; it’s really respectful to the culture and does a brilliant job with both its cast and their performances; and it just feels all-round great. I really hope that this does well and we get more of these characters in the Marvel Cinematic Universe but time will obviously tell. Oh, and stick around, because there are two scenes to watch out for: a mid-credit scene and a post-credit scene. The mid-credit scene sets up future films—though I’m not quite sure how—and the same goes for the post-credit scene which confirms that the cast of this film is going to be used in MCU’s future.
Calvin – Nerd Consultant
Share This Post: