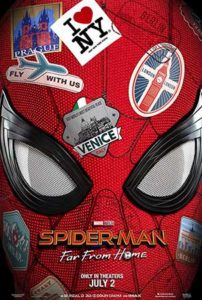 Spider-Man: Far From Home is now the latest film in the MCU. The twenty third movie since the beginning of this cinematic universe and will now close out the third phase of Marvel. Despite the fact that it was originally announced to be the beginning of phase four, which will start now next year. Spider-Man Homecoming was a decent success which prompted Marvel Studios to keep Jon Watts on as Director. If you check out my review for Homecoming, you’ll find that I was a really big fan of Homecoming. I thought it was a pretty good down to earth Spider-Man story. My only issue was that it wasn’t as cinematic as some of the other bigger blockbuster Spider-Man films. It’s got to now be a decent epilogue considering how the conclusion of Avengers End Game fared. Additionally, with last year’s excellent movie Spider-Man into the Spider-Verse and with the brilliant story from the Spider-Man game on PS4, Far From Home has got a lot to live up to.

I’m aware that some people still have not seen End Game and for that reason I’m going to try and avoid spoilers for the end of End Game as much as possible. However, the fact that this movie exists and is not set prior to the events of End Game, should give a bit of a clue as to some of the aspects of this film. But for now, I would say you’re probably better off seeing Avengers End Game before reading his review, but it’s not entirely necessary.

Spider-Man is this time a sort of road-trip movie since it follows Peter Parker a.k.a. Spider-Man (played once again by Tom Holland) on his class school trip around Europe. During a trip to Venice they run into another emerging hero named Quentin Beck a.k.a. Mysterio (played by Jake Gyllenhaal) who is fighting a group known as the Four Elementals. He claims to be from another Earth that was ravaged by the Four Elementals. With the help of Nick Fury (played by Samuel L Jackson) they need to team up to fight them back.

Spider-Man far from home will have a few surprises for its audience but once again I would describe this in the same vein as Ant-Man movies or even Dr Strange. They’re kind of filler films, they’re not meant to be the big films in the Marvel universe. Fans of Homecoming will be in for another good treat because it essentially is a very similar film. Much of the returning cast includes Tony Revolori as Flash Thompson, Marisa Tomei as Aunt May, John Favreau as Happy Hogan, Zendaye as MJ, Jacob Batalon as Ned Leeds who I stand by is perfectly cast in this role. In fact, the cast is one of the best parts of this film. They definitely feel as if they fit within a Spider-Man storyline. This one actually feels very similar to what you’d expect a Spider-Man story to be like, with Spider-Man being out of his comfort zone. I also like the fact that once again we’re not re-using the pool of previous villains. Take note Super-Man films, there’s more villains other than ZOD and Lex Luthor.

If you like Homecoming, it’s lot of the same as it doesn’t feel like much has actually changed other than the change in Spider-Man’s character after the events of End Game which is very much addressed within this film. It’s actually kind of a core focal point. It’s kind of about a world recovering from the events of that scenario and what it meant in the greater scheme of things. I think some people might be a bit annoyed that many scenes from the trailers have actually been cut. Including a certain set of sequences that looked very well done. In fact, it feels like a lot of this film might have been cut. I wouldn’t be surprised if down the line we’re going to get an extended edition on DVD.

Now really this comes back to my thoughts on what I think about Mysterio as a Spider-Man villain. Well, he doesn’t feel as personal as a villain like The Vulture or the Green Goblin did which I think is a shame considering that the best Spider-Man villains are the ones that feel rather personal but at the same time they do a really good job with Mysterio overall. Don’t act surprised, everyone knows where this one’s going. This new take on Mysterio is actually genuinely quite interesting. They actually work Mysterio’s gimmick into the movie quite well. Mysterio as a character is not very interesting. I didn’t really enjoy him that much in the 90’s Spider-Man animated series, in fact he seems like an odd choice considering that I’m fairly certain he doesn’t really appear in pop culture much at all. In fact, I don’t recall him showing up in any of the other Spider-Man animated series. He’s not even really been in the comics all that much.

If we talk about action sequences, there’s a couple of real stand outs in this one that really take advantage of all the characters powers. The globetrotting aspect also adds a new element to the film since it adds an extra sense of levity to the scenario. But it also does come off as a bit of a ‘This is an excuse to have the cast go on holiday and for it to be a massive advert for European tourists boards”. Location shots are actually genuinely very good, and they actually find good ways to use the various environments to their advantage. This is particularly the case with Venice which has actions scenes that use the canals to brilliant effect.

Other than being a sort of recovery film from End Game it doesn’t really tie in much with the Marvel Cinematic Universe at this point, though given how End Game ended and with Phase Four not even being announced at the time of writing, the direction of where the the MCU is going is not exactly clear. So, I think a low-key filler film was probably the right film at this time. But once again I’d say rather like Spider-Man Homecoming, this one doesn’t exactly feel as cinematic as a film like Spider-Man 2 or Into The Spider-Verse. I stand by Tom Holland as being one of the best actors to play Spider-Man since he nails a lot of different sides of the character. With a character like Peter Parker, you really have to nail that.

If I were to rank this film, I would say it would probably come 4th in my estimation of Spider-Man films. My top 3 being Spider-Man 2, Homecoming and Into The Spider-Verse. As a whole, I still like it a lot more than many other Spider-man films. On a technical level, this is one really good Spider-Man film. Even if it does feel like it re-treads a lot of Homecoming, it still does an excellent job with it. Some of the places they go with this film feel absolutely right. Spider-Man Far From Home is not the perfect Spider-Man film but as a whole it’s really good. Tom Holland once again excels in the role and the cast really make the film. The dialogue’s a little awkward at times. People going for a more traditional Spider-Man experience won’t get what they want. However, on a lot of levels it doesn’t really matter because the film’s really good, really fun and has some excellent sequences. As far a Marvel Films go, it’s a bit better than Captain Marvel but quite behind Avengers End Game.

I think fans of Into The Spider-Verse might not be as happy with this film this time around. But as a whole, Spider-Man Far From Home is another excellent Spider-Man film and another excellent Marvel Film. Oh, and if you’re going to see this film, do NOT leave the cinema when the credits start. You have to see the mid and end credits, particularly the mid credit scene which is one of the best in Marvel to date. The mid credit scene ensures we’re getting more from Spider-Man in Phase Four and the final credit scene doesn’t really setup Phase Four but it definitely proves that something is going on in the Marvel Universe at this point.

That’s it for me this week. Join me next week when I’m going to be reviewing the all-star zombie film The Dead Don’t Die. With all that being said, I hope you enjoyed reading this review as much as I enjoyed writing it.
Calvin – Nerd Consultant
Share This Post: