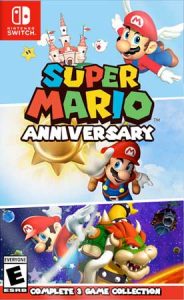 Super Mario 35 is a free online multiplayer battle royal game for the Switch online as part of the Mario 35th Anniversary. You play the original Super Mario Bros for the NES with 34 other players at the same time darting between levels back and forth with a small time limit which can be increased by defeating enemies which also sends that enemy to one of your opponents, keep going until you’re eliminated, last player standing wins. Which opponent can be set to Random, whose attacking you, who has the lowest time, or who has the most coins. Coins are also used for an item roulette which can be activated at 20 coins collected making coin collection more incentivised. If it sounds familiar it is very similar to the previously released Tetris 99. This obviously is really just a more chaotic version of Mario Bros on the NES so it’s built on good foundation of the game that would define all platformers going forward so most talk is going to be on how it works now as a battle royal game.

To have this new amazing way of experiencing. Both oldschool players and New Mario fans will get a lot out of this and this is one of the most addictive multiplayer games on the Switch. I really enjoyed my time with Mario 35 and unlike many of the online focused games I’ve reviewed this one I will be regularly playing while I can. This has been incredibly enjoyable way of playing Mario Bros

It’s free to switch online costumers which if you own a switch you likely have so give it a go just make sure you do now because unless Nintendo changes their mind this game is gone at the end of March
Calvin – Nerd Consultant
Share This Post: