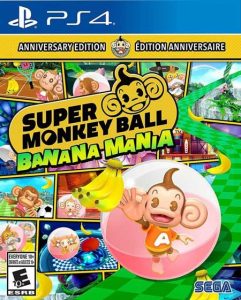 As part of Super Monkey Ball’s 20th anniversary there is special entry in the franchise. Bananamania attempt to remake Super Monkey Ball 1 and 2 with modern hardware and really recapture the magic that has felt absent from recent entries. Those entries were fine, but due to changes in things like the physics and adding in what was widely considered unnecessary mechanics, it just didn’t feel like the series was really firing on all cylinders. Sega has promised this game is a return to form and I can confirm at this point before I go into detail, they have kept that promise, despite the claims online of the opposite.

Super Monkey Ball: Bananamaina is in my opinion the best Monkey Ball game’s in years and delivers the experience most people were asking for. It does have issues such as some of the best features being behind a pay wall and a difficulty level that newer fans who didn’t have a chance to play the Gamecube will struggle with. But as a whole it is a very enjoyable and has replay value. If there was bit more care put into story mode I’d probably put it into the 9’s but as is, it just misses out. I also don’t think this is the kind of game I will be rushing to put on my Switch OLED when I upgrade. I had a good time with it, but it’s not a game I’m going to play continuously. Though I will certainly be returning if DLC levels are added and I will be getting the Persona 5 DLC.

This is a great game but considering what is coming out in October you might want to wait on this one and get Metroid Dread, Mario Party, Back 4 Blood or Guardians of the Galaxy. Especially Metroid Dread, we can’t afford for that game to sell poorly and result in Nintendo undervaluing the franchise again.
Calvin – Nerd Consultant
Share This Post: