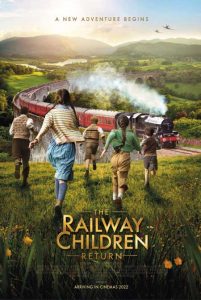 The strangest aspect about the film for me is the fact that it’s directed by Morgan Matthews, he’s a very odd choice to direct this while he has a lot of directing and producing credits; they are mostly for TV and documentaries. The most dramatic job I’ve seen him do was directing the Autism drama; X plus Y, which got renamed to A Brilliant Mind for international audiences.

The Railway Children Return takes place in 1944 during the evacuations. A group of kids from Manchester, Lily(Beau Gadsdon), Pattie (Eden Hamilton), and Ted (Zac Cudby), are taken to the Yorkshire countryside to be part of a new family. The mistress of their new school, Annie, is played by Sheridan Smith, who is also the daughter of Bobbie Waterbury (Jenny Agutter).

When the child of the family, Thomas (Austin Haynes) shows them a secret hideout, they find that it has been occupied by an injured American soldier, Abe (Kenneth Aikens) who is fleeing the American military police after he was attacked during a racially motivated assault. The kids now want to get him out of the village and to Liverpool so that he can take a freighter back to America before the MPs catch him.

Even though this film is technically a sequel, they may as well have just called this ‘The Railway Children But Slightly Different’. This is a film that really isn’t keen to do its own thing- it has so many call-backs to the original thing, and not just Jenny Agutter being a recurring cast member. All of the children kind of fall into similar roles to how they were in the first film. There’s so much likeness to the original that I’m surprised that StudioCanal didn’t just remake the Railway Children. It’s not as if it’s too soon since the last adaptation! Even the climax to the film is remarkably similar. It surprised me how much this film didn’t want to stand on its own.

It does give some interesting aspects of WW2 history particularly the stationed American soldier’s annoyance towards the British of how we didn’t segregate pubs like they did in America at the time, and in fact this choice actually resulted in bar fights. It’s an excellent choice because it does slightly modernise the story, in fact, Abe and his story arc are probably the best things about this movie, aided by an excellent performance from Kenneth Aikens. And I will say that the film does an accurate job being a period piece, the film is set during the fifth year of the second World War and the film touches upon the idea that the war isn’t over, but things are starting to go in the way of the allied forces. This is particularly true of Uncle Walter’s character (Tom Courtenay) who has a position in the government.

I’m not normally a fan of this very gentile type of film that is aimed towards a largely middle-class audience. Though I will say that the Railway Children is a good movie, mainly because it has some substance, particularly on the angle of racism. While it does lean into the idea that racism is an institutional problem and not an individual one, it never quite goes the whole way, and actually kind of contradicts it slightly at the end of the movie. There’s certainly a lot of darker elements to the film, for example, all the children’s fathers are fighting during the film, though there’s only so many things you would expect from a WW2 movie in here. There is a bomb dropped part way through the film but that’s about as tense as the action gets outside of the climax. I also am quite cynical to think that the American characters are put in there to try and aim towards an American audience. Though while I am being quite cynical on that front, I will say that the film really paints the Americans as the bad guys in this. While yes, the British weren’t segregating pubs like they did in America, we weren’t exactly saints on this front either. I kind of found it interesting that this film almost puts racism down to being an American issue.

If you’re going out to see this film, I will say that it is remarkably short! With credits it comes in at an hour and 35 minutes, and I got a sense that a lot was cut from this. While the film does feel like it has a fully complete story, it also at times feels like some parts of it have been gutted of content, or that it is racing to the finish time. I was surprised at how quick I was out of the cinema! If your plan was to get out of the heatwave to stay in an air-conditioned cinema, this one won’t keep you in that long. It also makes me think that considering the production values of many of the scenes that this was aimed to be on British television but failed to find a network provider. I could see this being pitched to the BBC.

I have been quite negative about this film, but I do think overall it’s okay. The central performances are pretty good, and it tries to be a decent modern interpretation of the Railway Children. But it is so caught up on doing call-backs to the original movie that it lacks its own identity. If you liked the original, there’s no reason you won’t like this, but I was staggered by the short length of the movie which really by the end felt like it just stops rather than ends, and I felt like it was confused in its messaging at some points.

I would say watch the trailer, if you think it’s for you then it is and vice versa. I would say that this is one that you can judge by the trailer, especially considering that they didn’t leave much out of it.
Calvin – Nerd Consultant
Share This Post: