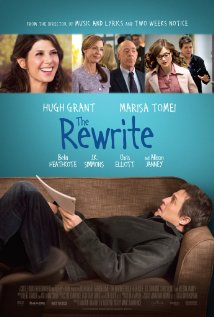 The Rewrite is a romantic comedy about a once successful screenwriter who makes the decision to fly from his life of Los Angeles to become a teacher in a New York University. Staring Hugh Grant, the film portrays the story of the trials and tribulations of working with students and how his former glories can influence the screenwriters of the future, the film is directed by Mark Lawrence and co stars Marisa Tomei.

The plot begins as Keith Michaels; a has-been British script writer once won the academy award for best screenplay in 1998 however has since divorced and has many difficulties financially. As he moves to New York, Keith is resistant to teach and as his attitude starts to take a disastrous turn as he begins an illegal relationship with Karen, a student of the university. The former screenwriters behavior is unique and both adventurous. As Keith has been in the public spotlight, the viewer feels his life experience shine through to add humor and intelligence to a group of young individuals, adding an insight to the thoughts and feelings of former glory and how this affects a person emotionally. As the story line unfolds his student teacher relationship subsequently ends and his place as a teacher is jeopardized as Karen informs to governing body of the university what has taken place between them. This affects Keith as he grows closer to another woman named Holly who is a mature student in his writing screenplay class. Feeling the bond between Keith and the students, one can only feel a strong illusion to the history of Keith Michaels. Witnessing a 50+ year old male relate and educate students to become excellent screenwriters. Hugh grant is able to portray calm and collective gentleman with humor and intelligence in every moment in this film as he guides one of his students to a once in a lifetime opportunity to meet with his production team for an opportunity to release his screenplay as a movie. Eventually after much deliberation this negatively impacts the moral of Keith as he is ready to pounce on the chance to produce this script however the viewer feels the disappointment in his actions as we sense the confidence of his ability diminish even further as the movie progresses.. Eventually after much deliberation Keith decides to let one of his students individually produce his screenplay and continue to live and work in New York. The ending of the production leaves the viewer confused with how the characters will continue; Keith and Holly express an emotional connection and also a similar passion for screenplay. The Viewer is awaiting an insight to the future of the pair however the relationship is left platonic as the film ends. As the university was informed on the events between Keith and Karen, This is eventually overlooked after much deliberation and he continues to teach at the university.

The humor in this film is witty yet tasteful using Keith’s unorthodox attitude to teaching and his relationship with his colleagues at the university, His interactions with the more unique and slightly deranged teachers and students at the university perfectly showcases acceptance of his teaching abilities. The interactions between Keith and a Star Wars Enthusiast on the course illustrates the level of imperfections of his teaching, representing that Keith allows the student to humor us with insanity of his script idea’s in a segment of the movie which enthralled me with the bizarre reality of screenplay writing as this sense of realism made the viewer feel as if they were a part of his class. As the personalities of the class come towards the viewer as the film goes on, we begin to see their personalities change from their usual behaviors to opening up about secret interests and the feelings behind the student’s scripts.

I particularly enjoyed the creative and intellectual influences of both creativity and personal struggle; I particularly enjoyed the humor and felt the role Hugh Grant portrayed was enlightening and progressive, seeing how modern day fame and fortune can develop into new pathways and occurrences. This was mostly portrayed inside the university as his emotional classroom statements about his son which he lost contact with. We witnessed an unassuming character open his feelings to teach his students about how morality and life experiences can affect the work in screenplay. From these experiences Keith makes contact with his son and makes the viewer feel a part of Keith Michaels journey from being a closed off person who took the easy way out of life situations, to a creative educator who inspires others to succeed.

My concerns with the movie are its lack of empowering and passionate moments. Though the viewer feels the connection of the students to Keith, we are awaiting an emotional or action pact moment to hit us with excitement and illusion. This unfortunately was not the case in The Rewrite as the film was by no means dull however lacked the cutting edge which many of Hugh Grant’s previous blockbuster’s has featured. The killer moments in Four Weddings & a Funeral, Mickey Blue Eyes, Notting Hill and many other of his films are defined by,. His previous movies were filled with scenes which captured the attention of the viewer in some way. There dialogue and connections made these films live long in the memory of British and American film lovers. The Rewrite was lacking a big conclusion to the events, I felt the film was very relaxing however could have incorporated more drama and strong emotions to live up to Hugh Grant’s previous roles. Also I feel when watching the film, the audience will be selective as humor is witty and mature which may not grasp many Comedy Fans looking for their fix of laugh out loud moments. As many of Hugh’s previous films have had moments of embarrassment and adventure, his latest role has more chuckles than laughter. As I enjoyed the film I think long term the Rewrite will struggle to compete with the classics of its genre, the educational twist is inspiring and developmental to one’s imagination, and however the younger audience may overlook this. When Keith and Karen are casually dating, the concept of a student teacher relationship was extremely overlooked and certainly lacked any sign of danger and excitement. As the film is classed as a Rom Com there was a strong lack of power and passion between the couple. As the film moved on and Holly and Keith begin to attract, this is left without closure and a lot of viewer’s will certainly feel let down and disappointed that this didn’t materialize on the film.

Despite this I do extremely admire Mark Lawrence for swerving past the usual clichés of a romantic comedy movie and there was much for the viewer to imagine and conclude on their own in the plot of The Rewrite. The ending was left with Keith and Holly still holding down their friendship as they both guided and advised each other during the course of the film. As the film progresses we see Keith warm to his students and open up to Holly more as we see the forefront of a character developing even further in life, seeing his British humor coincide with American culture, the viewer can relate and feel they are learning more about screenplay when watching this film as many creative and emotional messages are projected onto the film, as Keith teaches he advises his students on their scripts and details to Karen her repeated desire for a mature gentlemen is due to the lack of a father figure in her life. This is an interesting analogy which projects a real life message onto the viewer and the cast.

Overall I would extremely recommend The Rewrite to buy or Rent as this movie is an easy watch, relaxing film which educated the viewer as I felt empowered in the plot and cast of the film. The storyline does lack a defining moment however the heartfelt efforts of the cast shine through as we feel very apart of the action in every scene. Not only does Hugh Grant use humor and whit in portraying the character, he relates with the students and can grasp the thoughts and emotions of each character perfectly.

Not a classic but a good film none the less