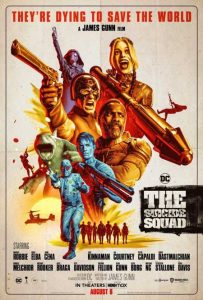 Not to be confused with the 2016 film, The Suicide Squad acts as a semi-sequel/soft reboot of Suicide Squad, and is yet another film in the DC Extended Universe. If you liked Suicide Squad, don’t expect too many returning characters—the only cast members to return are Margot Robbie playing Harley Quinn and Jai Courtney playing Captain Boomerang. The big deal with this one was the fact it has been written and directed by Guardians of the Galaxy writer/director James Gunn who was poached to do the project by Warner Bros just after he was unceremoniously fired from directing Guardians of the Galaxy 3 after some edgy joke tweets—anti-Trump comments—that he wrote online were uncovered by right-wingers. Now, this was a major get for Warner Bros, though Gunn’s involvement in future projects might be slightly compromised since, after Disney got a sense of perspective, they hired back Gunn to direct Guardians of the Galaxy 3.

Now, how does The Suicide Squad actually do, considering that this is the third Suicide Squad film I’ve reviewed, the second one being the straight-to-DVD animated film? Now, I’ve always made it clear that I’ve never been a fan of Suicide Squad. I didn’t really like the 2016 film all that much; I thought it was okay at best. And the comic series has never been really up my alley; it always feels a bit of a weird one, especially considering that DC never needed to create it. They had a superhero team made up of villains called Secret Six, it’s actually very well-written, and I actually personally prefer Secret Six to Suicide Squad. Nonetheless, there was obviously some demand for a sequel to Suicide Squad, mainly because DC and Warner Bros treated the first film more like a fashion brand before it was ever to be a film.

This latest incarnation, however, really pretty much starts from scratch. The plot is once again very similar to the first film. Amanda Waller, once again played by Viola Davis, has a mission for the Suicide Squad: they’re to uncover the secret weapon that’s been developed by Supervillain Thinker, played by Peter Capaldi, that’s in a facility of a fictional Latin-Caribbean nation that’s recently had a revolution and has now turned anti-American. And Rick Flag, played by Joel Kinnaman reprising his role, once again recruits a team of criminals staying in Belle Reve with the condition that if they refuse to do the mission he’ll turn against them and they’ll have their heads exploded by a chip in their brain. Okay, it’s a very standard plot and I won’t give away too much of what’s going on since there’s a little bit to uncover, but it does dive into quite a bit of DC lore, especially considering that James Gunn appears to have uncovered a ton of B-list villains for this one. It’s surprising how much the DC Universe is brought into this. The problem I had with the first film was that it had an excessive amount of Batman villains. Granted, there are quite a few Batman villains in this one. You have—pretty much the main character—Bloodsport, played by Idris Elba, Harley Quinn’s obviously back in that role, and there is Polka-Dot Man who’s played by David Dastmalchian. But the villain selection is actually surprisingly interesting this time. Killer Croc’s been replaced by King Shark who’s played by Sylvester Stallone and is one of the best parts of the film. And the back and forth that Bloodsport has with Peacemaker, played by John Cena, is hilarious. If there’s one thing that James Gunn is great at it’s scripts and character-writing, and that’s what he really brings to this film.

The other thing that helps it out? It’s R-rated, or 15-certificate in the UK, meaning that James Gunn can go all out. Granted, I think we’re seeing an excessive number of R-rated comic book films coming out since Deadpool’s success, but I would argue The Suicide Squad feels like the right place to do it. As a result, it’s a lot less afraid to go gory. One of my problems with the 2016 film is that it wasn’t willing to kill off enough people; this one does not have that problem. It also didn’t suffer from having one of the most boring villains. Not only do you have the Generals that have taken over the fictional Latin-Caribbean nation, you also have Peter Capaldi’s Thinker who is pretty good in the role actually, all things considered. I’m not too familiar with that character so they did a pretty good job establishing him and his motivations. Another stand-out character for me was Ratcatcher played by Daniela Melchior, again a reinvention of a Batman villain though this one establishes that she’s the daughter of the original Ratcatcher, but her entire character is pretty much a film creation. Considering how well she’s written in this one and the great dynamic between her and King Shark, I wouldn’t be surprised if she actually gets written into the comics. If there’s one thing I’d say against it it’s that she almost seems a bit too good. I think they made should have added a bit more of an edge to her—you kind of wonder how she ended up in a prison for the worst of the worst at some points. It also helps that James Gunn really knows how to direct action and he doesn’t shoot the majority of this film at night in environments where none of us can see what’s happening. That’s something I really hated about the first time we saw Suicide Squad.

As for the performances, I think it’s pretty much good all-round. Idris Elba looks like he’s having a lot of fun, Margot Robbie clearly still loves playing Harley Quinn, and John Cena actually feels very well-cast for the role even though he’s arguably probably the most identifiable cast member in this, especially for American audiences. And James Gunn for once actually knows how to blend his serious action roles with his comedic roles which has definitely been where his stronger performances have come from. Also, one thing I felt was really strong about this film is it actually has a lot more to say than many of the DC films. It definitely feels like James Gunn is commenting on not only imperialism and, to a certain extent, the American justice system, but he also seems to really be commenting on US interference and foreign policy with dictatorships with some of the plot elements later in the film. I’d have to go into a spoiler talk to really dive into it but trust me, the film feels like it has a point. If there’s something I would like to say, however, it’s that it feels like it might be 10 or 15 minutes too long. There are a couple of scenes I felt could have been cut down a bit and some jokes don’t really land. I also don’t think this is going to impress people that were impressed by the first Suicide Squad film—the audience I was with—or fans of the Birds of Prey film (well, the people that actually saw it after that film bombed in the box office).

The Suicide Squad is also not the film that’s really pushing the DC Cinematic Universe into a direction. In fact, that’s been a big problem I’ve had with all the DC films of recent. I’m glad they’re much more self-contained so they work better standing alone but it doesn’t feel like the DC Cinematic Universe at this point has an end goal. There’s certainly not going to be another Justice League film, and the fact that they can’t seem to nail down a bunch of directors to get some of these characters off the ground is definitely not helping things. This film also doesn’t leave an impact in the same way the most successful films have. In the pecking order, I would still put this film below Shazam! and Wonder Woman, though I would put it above pretty much every other DC film up to this point. The reason I say I don’t think it will impress a lot of the Birds of Prey fandom is that Harley Quinn has long moments where she doesn’t get much to do, and the films are tonally very different. I get the sense that James Gunn kind of made a film for himself and a lot of the diehard DC fans so I think a general audience might not get as into this as some of the other films.

That being said, I actually really liked The Suicide Squad; I think this is generally a very good film, though I’m reluctant to say it’s great because I think it runs on a little too long and some of the jokes don’t land. It does, however, have very well-directed action scenes, it’s an R-rated film that really feels like it needs to be R-rated, and it has very good character dynamics and dialogue, something that James Gunn is known for. You can really feel Gunn’s fingerprint on this product. However, I don’t see this connecting with a large audience in the same way Guardians of the Galaxy did, or fundamentally changing the public perception of that team in the same way. For example, Guardians of the Galaxy is getting a videogame later this year, and considering that less than a decade ago audiences were just starting to get to learn who they were, I don’t think we’re going to see that fundamental team dynamic change within the comics, for example. I’m just glad after the last two weeks I finally got a film that I was actually happy to see.
Calvin – Nerd Consultant
Share This Post: