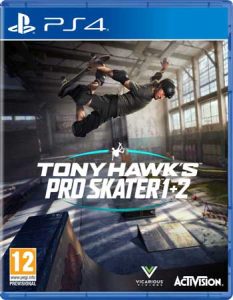 Activision earlier this year announced that after completely killing the Tony Hawk Pro Skater franchise between their terrible peripheral based game Ride and the terrible Pro Skater 5 that was not only bad but also literally had the entire game patched onto the disc on day 1, (which means in the future when the servers go down you won’t be able to go beyond the tutorial) a remake of both Tony Hawk Pro Skater 1 and 2 from the PS1. Now these beloved ps1 games have been given the modern generation treatment. The game has arrived and it is for the most part a faithful remake of the game with some modern extras with the game being developed by Vicarious Visions and Beenox who handled the Crash Bandicoot and CTR remakes. Rather like those games it’s very much the original game if it was made for todays consoles and it certainly has feel of it. that’s not necessarily a dig at it there’s a reason people still think fondly of these games and get tons of views on twitch streaming them. The game itself doesn’t have too many extras from the initial outset though the addition of Online multiplayer certainly helps and there is a few unlockables (no one of them isn’t Spiderman unfortunately).

Tony Hawk Pro Skater remakes are really good fun which is something the series really needed. This is a really good time and is an excellent time with friends on the multiplayer thanks to the brilliant controls and well-tuned physics. It does have a skill barrier but the game encourages you to experiment and get better and the feeling of satisfaction pulling them off is excellent

It’s an excellent deal for a full priced release track it down though there are digital editions with extra content that might be worth it.

Nintendo Switch owners also should keep an eye out I can see this being announced during a Direct or a partner showcase and there is some internal evidence to surgest a Switch version is on the horizon
Calvin – Nerd Consultant
Share This Post: