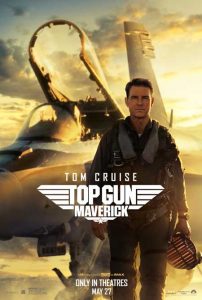 Top Gun: Maverick is the very belated sequel to the 1986 film which has kicked around Hollywood for quite some time- sequels have been pitched a few times, but they have fallen through quite a few times. I thought it was never going to happen, though it has now come to fruition thanks to Paramount despite some delay. It was meant to be released some time in 2020, but because of the pandemic, it was kicked around the release schedules a few times. It’s now out and comes from director Joseph Kosinski, whose previous biggest blockbuster was Tron: Legacy.

Tom Cruise is once again starring as Maverick, but he also has a lot more of a say in this film because he also has a producer’s credit.

I was expecting this film to be similar to a lot of recent legacy sequels who just want to cash in on nostalgia, and that was never really going to work for me, because I’m not really the biggest fan of the original Top Gun. I think it’s an alright movie but I have always felt rather lukewarm towards it. You’ll see that film in a completely new light if you watch the most recent Legal Eagle video where he sat with a military lawyer who points out all of the crimes that the characters commit in the first movie!

One of the things I was surprised by was the fact that Top Gun: Maverick is quite a mature film. The film picks up decades after the events of the first film and involves Maverick being sent back to Top Gun to train new recruits after botching a test flight of some new equipment, to prepare the team for a near impossible mission. This team is mostly made up of young recruits, one of which is the son of Goose from the first movie, Rooster (played by Miles Teller) who has a grudge with Maverick.

I liked that this film moves Maverick into a mentor and father figure role, he’s definitely not the same character from the first movie, they’ve actually stuck to the progression and this film shows how the events of the first movie still haunt him, it also does a very good job showing the closeness of his relationship with Iceman. Obviously Iceman’s role in this film is kept to a minimum, due to Val Kilmer’s health issues- his role is mainly set to being through text messages. Tom Cruise actually fought for and succeeded in getting one small scene between the two which is very touching, especially considering that Val Kilmer apparently really wanted to be a part of this movie. They’ve given Iceman the exact same health issues and it does lead to one of the best scenes in the entire movie.

But I also thought that the film did an excellent job with the younger cast that joined it. They’re certainly an interesting group, though the standouts are Miles Teller’s Rooster, Monica Barbaro’s Phoenix, and Glen Powell’s Hangman.

The film also has a love story that I actually found a lot more believable this time around, because the love interest is someone from Maverick’s past, Penny Benjamin (played by Jennifer Connelly). I thought that it worked a lot better because I think Cruise and Connelly have good chemistry together.

But the thing that really blew me away was that Miles Teller gives a really good performance in the film. I’ve never been particularly impressed with a performance from him apart from in Whiplash, but after seeing this I would probably say that this performance is on the same level. Teller’s biggest problem is that he’s been miscast on quite a few occasions, but he’s perfectly cast for this role. The relationship between Maverick and Rooster is one of the core parts of this film.

I think that this is one of Tom Cruise’s best performances in years. I usually struggle in other films to separate Tom Cruise from his character but this film is different. I don’t think it’s just because he’s playing one of his most iconic characters, either.

But of course we have to talk about the special effects. Top Gun, at the time, gave some of the best aerial shots and was amazing for how well it did in terms of cinematography and effects. We’re now living in an age where audiences are more accustomed to CGI but what amazed me was the fact that despite the fact that there’s been a lot of computer effects used: it’s really hard to tell! This film looks stunning. It’s been shot for IMAX so on that basis I would suggest going to see it in that format. Though I didn’t see it in IMAX, it was still really great. They make the dog fights and flying look really intense, and at points you actually feel like you’re really there in the cockpit.

It also doesn’t try to go too far into nostalgia pandering. There’s a few bits and bobs there, the famous volleyball game from the original has been replaced with beach American football and the opening song of the film is Danger Zone, but even still this film feels like a sequel that was made to be a true sequel.

The soundtrack is also excellent. The film’s score is really good, though I’m not sure I’ll be playing it to myself too often, I do feel like it really suited the film and I wouldn’t object to it getting some awards for that category. As for the Lady Gaga song that features, I think it’s good for the setting, but I’m not sure how well it will do outside the film on the charts.

Top Gun: Maverick is one of the few legacy sequels that really nails it. If you’re a fan of the original and you’re worried about your nostalgia being butchered by this film, don’t be! It’s a really good follow up and really surprised me in that sense. If you haven’t seen the original, here’s your excuse to do so. I think the two films play off each other very well and would work great in a marathon, and I would really recommend you to go and see this film in the cinema to get the full effect- the visual effects are really worth seeing and I would definitely recommend a viewing in IMAX.

The film makes a really good carry on and has some excellent character arcs, and this has probably been the biggest surprise of the year for me.
Calvin – Nerd Consultant
Share This Post: