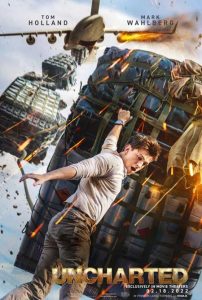 Uncharted is a new movie that is in the initiative that Sony is putting out to make films based on their PlayStation franchises. This is most evident from the fact that the opening sequence features a ‘PlayStation Productions’ logo, with lots of imagery of their current franchises like God of War, Horizon, Ratchet and Clank, etc.

Uncharted was an interesting place to start considering that the games themselves are very much like Indiana Jones films already. It was an interesting choice considering there’s likely not going to be any more games in the series, with creators Naughty Dog wrapping up the story to move onto more games in The Last of Us series, which also should be receiving a series on HBO next year. In the director’s chair this time is Rueben Fleischer, director of Zombieland and Venom.

Nathan Fillion, who played Nathan Drake in the games, was not approached to play him in this movie, despite the fact that he had done very well in the role in an unofficial fan production that was put on YouTube. Instead, the film was going for a younger version of Nathan Drake and cast Tom Holland in the role – something that seems like an interesting choice, but it did lead to fears of a miscasting.

The film centres around Nathan Drake, who is looking for clues leading to the whereabouts of his brother Sam, and in the process comes across an old friend of his, Victor Sully (played by Mark Wahlberg) who mentions that the two of them were on a trail of gold hidden by the Magellan Exhibition – a lost treasure worth billions. They want to get it for themselves, but are being pursued by a descendant of the family that financed the expedition, Santiago Moncada (played by Antonio Banderas), who believes it’s his entitlement to have the gold, alongside his henchmen Braddock (played by Tati Gabrielle).

I’ll give Uncharted some credit, it’s not entirely unrecognisable from the games, there is definitely a lot of attention made to it, the opening sequence for example is the famous jet hanger sequence from Uncharted 3. I will say that there’s a lot of small details that work quite well. I particularly appreciate towards the end of the film the iconic theme song was actually incorporated into the score, the only other time it appears is in the credits.

I also thought it was a weird choice to adapt Uncharted in the first place and I kind of got that correct, the only reason being is that Uncharted is kind of a weird story, it’s not as if you have much room to really do anything with the game’s story, fortunately, the filmmakers made the wise decision to make an original story rather than adapt one of the games for the most part. But to be honest they haven’t quite succeeded. Mainly the fact that this film goes on for very long periods with not a lot happening. This film is rather dragged out in many regards.

Now don’t get me wrong, there were some incredible sequences in this film but there’s also a bunch of weird things that stuck in my head. For example, there’s a scene where Sully and Nathan are chucking a pair of keys back and forth with each other above a sewer grate in Barcelona to unlock this ancient relic site, but that begs the question, if it was that easy to spot that it was here, why has no one uncovered it until now? Someone would know about this! There’s a lot of minor things like that.

I also found it interesting that they were not entirely writing the actors to play their characters. Now Tom Holland is slightly miscast as Nathan Drake, I won’t deny that – but I did get some faint glimmers and moments where I could see him giving an attempt to become Nathan Drake. He does get down some of the small mannerisms and the correct speech tones so it’s not totally unrecognisable, and I could definitely see him melding more into the role in time if this film gets a sequel.

Mark Wahlberg, on the other hand, is really not playing Sully. He’s probably the most miscast of any of the actors in the film and it’s not just about that fact that for most of the film he doesn’t have the big moustache that the character is known for in the games. It really seems as though he’s just been put in the film to be an extra bit of star power to put on the poster because he’s just playing a typical Mark Wahlberg character.

The actor who resembles their game counterpart the closest would be Sophia Ali who plays Chloe Frazer, who is pretty well cast. She doesn’t just look like the game character but she actually gets down a lot of the characters traits. She certainly gives an excellent performance.

That being said, however, one of the weakest parts of this film is the villain, no disrespect to Antonio Banderas but the villain he’s been asked to play is boring. He doesn’t get to do much of anything. I won’t claim that the Uncharted villains always have the most complex motivations, but they still felt a bit more interesting than this (with the exception of the villain from the original Uncharted game, no one likes that one). It’s weird, because I actually think Antonio Banderas had something in mind for this character that only he knew, but the writers and directors didn’t get it out in the performance. My main problem is the fact that he is an ineffective villain, the majority of the villain stuff is performed by Braddock. But Tati Gabrielle is also playing a character that also has very confused motivations. There’s a moment later in the film where she does something really bizarre and I was thinking ‘why did you do that? That makes no sense!’ But apparently we’re meant to go along with it.

This would be somewhat excusable if it wasn’t for the fact that this film has a fight scene between her and Sully which has one of the most blatant product placements I’ve seen since the Krispy Kreme product placement in the Power Rangers movie, involving an entire fight scene taking place in a Papa John’s in Barcelona. The plot gymnastics that had to take place to justify this just baffles me. Trust me, when you see it, you’ll know what I mean.

As for the action choreography, it does replicate the games quite well despite the fact that there’s a noticeable lack of guns in the film, something that was really not the case in the games. The parkour on display is very well choreographed and akin to the games, and I think that they did a good job with the on location shots. The COVID-19 pandemic certainly slowed down production because they couldn’t get it to many of these locations for parts of the filming, and I think where some of the cuts have been made is due to pandemic-related issues. This feels like a film where there were a lot more ideas in there, but due to COVID certain issues and ideas had to be left aside.

Uncharted is clearly a franchise starter but it’s trying so much to be a franchise starter that it’s actually tripping itself up in many places and may have fallen at the first hurdle. The actors haven’t quite gotten used to playing the characters yet, the development isn’t entirely there, and the film needed much better villains than the ones it’s got. I really hope that this film does well because to be honest because I wouldn’t mind seeing a sequel with a more confident cast and writing team, but I suspect this film may end up bombing at the box office. And while it does have excellent choreography there’s a few casting and writing decisions that make it hard to justify. If you like the games, there are a few little easter eggs here and there that will give you some enjoyment, it’s certainly where I got the most enjoyment watching this film.

If you’re really desperate to see this film, I would say this might be worth going to the cinema, but I do think you can easily wait for this to come out on DVD or streaming.

Surprisingly, there were parts of this film that I enjoyed, but I’m not in a rush to see it again, and if it doesn’t get a sequel I won’t be too upset. Let’s hope PlayStation Productions has a better track record after they’re done with their planned film for Ghost of Tsushima.
Calvin – Nerd Consultant
Share This Post: