Venom: Let There Be Carnage – Review 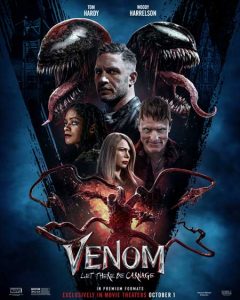 “VENOM: LET THERE BE CARNAGE”

Now, last time I talked about Venom was a few years ago and I was not a huge fan of that first film by any means. In fact, I’m pretty sure I put it in my ‘Worst Films of The Year’ list for how bad I thought it was. It was a completely confused mess of a film. However, I was clearly in the minority—Venom did pretty well in the box office and, as a result, Sony did get to work creating a sequel. This was hinted at in a post-credit scene detailing Woody Harrelson playing serial killer Cletus Kasady who goes on to become Carnage. Years later, most of the team has returned to reprise their roles, though there has been one slight change: Andy Serkis has now been placed in the role of director. And in short, for reasons I’ll go into I think he actually made a wiser choice in many regards, though in others I’m wondering if he might have been hampered a bit by the studio process.

Venom: Let There Be Carnage basically follows on almost directly from the first film. Eddie Brock is still inhabited by Venom, protecting San Francisco in a more violent fashion than you’d expect from a supposed hero, but he gets a big scoop when he unveils the location of one of Cletus Kasady’s victims, thus securing the death penalty for him. We’ll ignore the fact that that’s not how that works; there would have to be a court process over this, and if he’s already been sentenced to death that was already clearly going to be carried out with or without a body, but I’m getting bogged down in details. Cletus does get a bite out of Eddie and thus swallows a new symbiote which he infuses with, becoming Carnage. And not only does he want to get some revenge after breaking out of prison but he wants to get back his girlfriend Shriek, played by Naomie Harris. Okay, here’s the thing: if you liked the last Venom movie, it’s more of the same. I didn’t like the last Venom movie but I actually think this is a better film, though not by much of a margin. Where this film really benefits is its more much interesting villain. And here’s a test for you: what’s the name of the villain of the first Venom movie? I’ll bet 9 out of 10 of you that read this will not be able to answer that without looking it up.

It is kind of cool but this Venom film I find bizarre; not much actually happens in this for long periods of time. We get this stupid one-man comedy show repeatedly throughout it, and if you thought Venom was de-fanged in the first film, it’s not really improved all that much in the second film. And the thing is, Tom Hardy I think could make a good Eddie Brock but the way he’s written makes him feel horribly miscast. Now, I could bog myself down with this but these are all problems I had with the first film. The big thing this time is Woody Harrelson as Carnage, and I actually thought he was alright in the role. But we run into another problem, that being that this film is rated PG-13 which means it’s screwed from the start. Basically, because of the rules of how the ratings work in America, PG-13 films cannot go all out with their gore or language. And in particular in regards to the gore, that means we’ve got one of the most violent villains in Marvel and we’re not allowed to go all out with the levels of violence that you can achieve. His name is Carnage for crying out loud. Now, there are several things I don’t like about this film but that was one in particular that bothered me.

While the special effects do feel like they have improved, they still feel a bit over-animated for lack of a better word. The best special effects don’t make you realise the process being made to bring it to life, but this is the kind of film where you definitely feel like you can see the lines of code that have been used and all the various texture layers that have been put over each layer of the effect. As a result, it really throws you out of it. In fact, the reason the effects are kind of ropey is why I suspect most of this film is once again shot at night where we can barely see what’s going on, not helped by the fact that the fight scenes are once again really badly cut together. There are so many shots that don’t go on very long and the choreography is terrible. They’re all shot really close up with little time for you to take in exactly what’s happening. The best fight scenes are the ones where you could actively choreograph it out yourself in your mind. The Russo brothers do a fantastic job with this in their Marvel films, but what we have in both this and the first Venom film are really quick-cut and kind of nonsense. And it feels weird that this film doesn’t have much of an idea of how to handle the effects considering Andy Serkis of all people is directing it, the guy who made his name from visual effects and actually putting himself into characters for complete transformations which he did through motion capture. In fact, if anything, apart from the seemingly lighter tone of the film, I really don’t see much of Andy Serkis’s presence in this film; I actually forgot he was directing it until the credits came up.

What’s more, Let There Be Carnage also feels very hollow by the fact that, once again, it’s a really short film, just under an hour and 40 minutes if you take the credits into account, including the post-credit scene. As a result, the film feels like it’s rushing for time; there are tons of things that feel rather underdeveloped or have to get resolved really quickly because the clock’s ticking. Venom: Let There Be Carnage is a superior film to its original but that was not a massive bar to leap over, and I wouldn’t even say this sequel is a good film. It’s possibly a passable film but it doesn’t live up to the characters it portrays. It’s got terribly choreographed fight scenes, tries to cover up its lack of visual flair by shooting most of its scenes at night, and the acting has not really improved all that much from the first one. This film at least feels a little more faithful to its source material, but even then it’s kind of undercut, mostly by the fact it tries to get a PG-13 rating to get more of an audience. If you like the first film, you’ll probably like this one; you’re getting more of the same. However, if you didn’t like the last one, the only reason to see this is the post-credit scene which basically confirmed we will be seeing Venom pretty soon.
Calvin – Nerd Consultant
Share This Post: