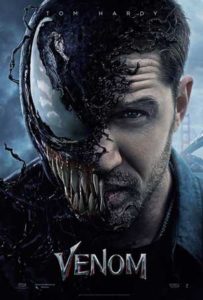 Venom is a project that has been around for quite a while. He is one of the most popular villains in Spiderman’s books. I’ve always kind of liked Venom as a villain mainly because he was kind of this interesting alter Spiderman. He knew everything about him and how to counter him, and of course there’s been a lot of mystery built up ever since its first appearance in the Marvel Event comic, Secret Wars.

Plans for the movie had been around for quite a while, in fact there’s been quite a few scripts thrown around. Sony at one point was planning to start their own sort of Spiderman universe to rival that of the Marvel cinematic universe, with other plans to create films such as Sinister 6 which never got off the ground and Marvel essentially got Spiderman back. However, Sony still had some rights to some of Spiderman’s stable of characters and kept pushing ahead with this idea of a Venom movie, which made no real sense in my opinion.

The director they finally settled on is Ruben Fleischer, who is a decent director having directed films such as Gangster Squad, but most notably he directed the 2009 film Zombie Land, which I actually really enjoyed. Sadly however, Ruben Fleischer hasn’t really saved this film. I know I’m jumping the gun a bit and I saw this film on the Saturday after it came out I wasn’t immune to the word of mouth of the film, but I did go in the film with as much of an open mind as I could.

The film is kind of what you would expect. A spaceship crashes into earth carrying alien life forms, for the life organisation led by Carlton Drake, played by Riz Ahmed, who is apparently up to some shady business, our obvious bad guy. He is currently being investigated by journalist Eddie Brock, played by Tom Hardy, who after Drake puts in permissions to ruin his life, goes about it in the best way possible by carrying on investigating him after a few benders, which leads to him becoming infected by one of the symbiote suits, which means he now has dual personality with the alien being Venom, now he’s trying to avoid being killed by Drakes men and also trying to keep Venom under control.

I have no real enthusiasm to talk about this film, I’ve heard people give this film a bit of a pass but personally I really despise it. This is something I’ve had a problem with for a while, the idea of turning Venom into an anti-hero. It just doesn’t work. Even with the current Marvel books it hasn’t really worked. Marvel has constantly tried to turn Venom into an anti-hero, but I’ve never been a fan of the idea, I just don’t buy it. Venom at the end of the day is well and truly a villain. I don’t like this idea of the popular villain gets their own sort of book where they’re the focus. Marvel does it all the time. If you think I’m just going to bash Marvel, DC can be even worse about this, dedicating one of their event comics to villains for crying out loud!

Then if you’re expecting accuracy to the comics, well you’re not going to get much of it here, this is really not the version of Eddie Brock that was in the comics. To put it simply Eddie Brock most incarnations is not really a nice guy. In fact, if anything he’s every jock bully that just happens to have been given super powers. In comic storylines, the irony of it is that he basically does cause his own downfall and does become Venom pretty much out of choice. Whereas in this film he is sort of forced into the role and I don’t think that works as well. They also kind of go for the duel body Jekyll and Hyde idea with Venom in this. Which again I think detracts from this. I might be reading this wrong, but in the comics, Venom just brought out the worst side. Since Eddie Brock wasn’t that great of a guy to start with, the idea of him having a symbiote suit to bring out the worst side of him makes him even worse. In this film since he’s a pretty nice guy it doesn’t feel very genuine. In. fact Tom Hardy plays this character where he flip flops constantly and you’re never able to get a grip on the character whatsoever. There was actually one scene where he was very horrified with the symbiote, then he’s suddenly really into it, there is no real internal debate about it. Sort of like Spiderman 3, at least there was kind of a progression around the suit, it wasn’t good progression and lead to that awful emo Peter Parker scene but damn it was just weird.

If there is one thing I can see about this film it’s that it clearly had producers trying to fix it in post. Now the film does come in at a run time of 1 hour and 52 minutes but I was in disbelief by this! it felt like the film only went on for an hour and a half. The film is so devoid of progression, it feels like its missing a middle act. This is a very long first act and a final act, as a result there is so many plot threads dropped. There is actually quite a few symbiote suits that are in the film but only two of them make full appearances. One is teased but is then just dropped part way through the film. Several sub-plots and side characters have story lines that go absolutely nowhere and it’s very clear form that and Tom Hardy’s statement that this film was pretty much gutted in the editing suite.

For a film that they claim to be dark, this film sure has a tonne of light moments. This film is way to jokey to be a dark movie. They keep trying to do this whole darker, edgy side to it but then also try to be snarkier like the Marvel cinematic universe films. It fails miserably. The times this film tries to be edgy it basically sounds like one of those pretentious kids that you meet in school, you know that whole ‘I’m doing this because it makes me look bad’ idea. Where we then go, ‘No you’re not, you’re incredibly tame, you wouldn’t even know the meaning of the word edgy’. That’s this film in a nutshell.

The script in this film is appalling. If you’re going for humour I barely laughed during this film and the performances do not help this script. Tom Hardy’s alright, but I think that’s because he is Tom Hardy and he can seem to act his way out of any bad role he is in most of the time. Then you have Michelle Williams who seems bored out of her mind throughout the entire film. Riz Ahmed plays one of the most appalling one note villains in recent memory. Woody Harrelson has a cameo that teases the audience for something in the future, god help us. Reid Scott is another actor who feels wasted again. The whole thing is just weird.

Now the special effects vary from piece to piece, some of them are quite good but some of them look incredibly awful and outdated. It doesn’t help that this films cinematography is the worst! It is shockingly bad! In a bunch of the action scenes I had no idea what was happening, and some of them were damn painful to watch. Not to mention this film is shot in way to dark conditions. It gives Fantastic Four a run for its money, god help you if you try and watch this film in. 3D. I’m glad I went to this in 2D otherwise if it was in 3D I would barely be able to see the movie. Not to mention the action scenes are really dull, they try to use a symbiote suit to the best of their ability, but again because we can barely see anything it doesn’t really work. For a film that borrows so much from the Marvel cinematic universe you would think they would have borrowed some of that great choreography.

Venom is a prime example of a bad idea that should have been squashed a lot sooner than it did. This film’s been given a pass by way too many people and it really doesn’t deserve it. This is one of the dullest comic films I’ve seen in recent memory. It’s so all over the place I have no idea what to make of it. The film makers clearly try to fix it in post. It might not be as bad as some of the film makers made it out to be, but at the same time it is absolutely nowhere near as competent as some critics have made it out to be.

It is a film that I would really not want to see again and it’s further proof that this character will not work outside in its own film, but because of its box office taking the likely of a sequel seems there. God help us!

Well that’s it from me for another week and I’m hoping for better things, so next week I’m going to look into Oscar nominated director Damien Chazelle’s latest bio pic into the life of Neil Armstrong with First Man.

With all that being said hope you’ve enjoyed reading this review as much as I enjoyed writing it
Calvin – Nerd Consultant
Share This Post: