Voldemort: Origins of The Heir – Review 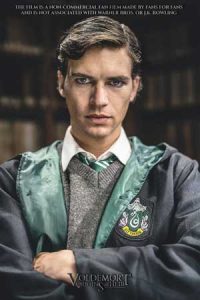 “VOLDEMORT: ORIGINS OF THE HEIR”

OK, there was nothing I wanted to see at the cinema last week, so I decided I would do something that I have wanted to do for a while now, review a fan film.

Fan films are certainly getting more and more prevalent now, this is down to the fact that YouTubers provide a larger audience and the fact of the matter is that there is a lot more technology available to people. It’s very easy to make a film like this. It’s very expensive, but it is still not too difficult. Plus, they guarantee you an audience. The downside is, you can’t make any money off it. This has proven with this project which did gain a viral following after it’s trailer went online. I even kind of fell for it, believing it was genuinely going to be a movie. Although, I did also comment that I thought it was a stupid idea, since I thought we already had well established Voldemort’s back story.

Voldemort Origins of the Heir, I am a bit late to it. It came out on YouTube in January after Warner Bros presented the directors and producers with a seasoned assist letter after the kick start of the project became apparent. A compromise was made so that the film could be produced but only on the proviso that no-one would make any money off of it. Now I am aware that the Dom did review this film very recently and I am going to do my best not to copy what he said in his review, though I do suspect that comparisons will be unavoidable. Also, because this is a fan film, I am probably going to be a little more lenient than normal since they are a big budget studio for this one.

Voldemort Origins of the Heir I should also point out is an Italian production, directed by Gianmaria Pezzato, who also developed the script and as a result, the English actors are dubbed at the end, mostly being played by English actors and I will get it out of the way right now, the dubbing is appalling. In fact, one point which I will agree with the Dom is that I would much rather have seen this film with its original Italian actors with sub-titles, since I reckon they deliver the lines a lot better and it reeks of poor direction.

The film centres around Voldemort during his time at Hogwarts under the name Tom Riddle as he forms a club of heirs with the heirs for Gryffindor, Ravenclaw and Hufflepuff and the film sort of depicts an outsiders look from the perspective of the other heirs into his rise to prominence and becoming a Death Eater.

OK, straight up, this movie is a fan film and I am going to cut it some slack since the production is quite good for a film of its low budget and I do think on a couple of occasions, they really nailed the look and feel of Harry Potter. An early Wizard battle being a prime example, but man is this film bad. I mean it. I am going to lay off on the failings in continuity with both the books and the film, since the Dom did a much better job of than I ever could, but man, Voldemort Origins of the Heir is bad when it comes to it!! If JK Rowling intended for this to be Voldemort’s back story, I think she would have written it this way. This new version of Voldemort really doesn’t kind of have the sinister nature that the original had. In both the books and particularly the film’s Voldemort in his younger days is a much more cold and calculating figure and he hides his quest for knowledge behind curiosity. This one spouts out that he wants to kill the muggles every five seconds and you wonder how he gets away with it. The heir for Gryffindor, for example is essentially a love sick teen that keeps overlooking his actions, even after he goes full blown evil. Speaking of which, despite the fact that this is called Voldemort Origins of the Heir she is the main character. The film actually starts with her invading a Soviet magical facility, trying to get Tom Riddle’s diary back, which if you recall from the Chamber of Secrets, Half Blood Prince and the Deathly Hallows, was pretty dam important in the long run. The rest of the story is then told in flashback, which is an interesting way of doing it, but then again, this is supposed to be a film about Voldemort and he feels like a secondary player. I get a sense that the film makers were trying to nail what he was like in the first three or four books/films, always in the shadows and seeming like this mythic figure that was both there and not there, but he is in the film too much to have that appeal. Plus, as bad an idea as it is to go further into his back story than necessary, this is supposed to be what the film is meant to be doing and it doesn’t even do that.

I will say that the actor they chose to play Voldemort at least looks similar to the actual younger actors that played him in the film, but that’s all the praise I am really going to be giving and as the Dom pointed out in his video, there are a ton of continuity errors in this, but at the same time, it also feels like they feed a lot of tension to other aspects of continuity. It very much feels like they have cherry picked idea.

The film is fifty-three minutes long, and you can get through it very quickly, but I think you should really only take this as a “what if scenario” at best, since taking this as “can” really wouldn’t work. The film is rather bizarre in its focus, this is one of most unfocused fan films I have ever seen. The best fan films tell short stories that feel very insular and contained but could easily fit in the continuity of their respective franchise, but at the same time don’t rock the boat too much and make the most of their budget. They do manage to make the best of their budget, the sets do at least resemble places in Hogwarts and the uniforms are quite decent replicas, but the rest of it doesn’t quite work. The prime example I always use for a great fan film is Batman City of Scars, which is an excellent fan film and it ticks all of those boxes. Another example would be the Night Wings movies on YouTube, but this, this is just bizarre and it doesn’t quite work and as a result, I really can’t recommend it. There are some good sets, good props and the effects are pretty dam good for the budget they had. However, the film is a really boring mess and definitely one of the weaker fan films I have seen in recent memory.

This might have gained a lot of attention and considering you don’t have to pay for it, it might be worth it as a curiosity, but even then, I think Harry Potter fans should probably not bother, unless out of morbid curiosity and just wait for Fantastic Beasts 2 to come out later this year.

Oh, and before I forget, the film has a final twist, which makes absolutely no sense when you think about it and pretty much ruins most of the film. I am serious, they have completely shot themselves in the foot.

Right, now I have this little break and detour, since I was having a very badly scheduled week, it’s time to get back to proper business. Next week I am checking out the latest entry in the Jurassic Park franchise, Jurassic World Fallen Kingdom.

Thanks a lot for reading my review. I hope you have enjoyed reading it as much as I have enjoyed writing it and if you have to see a fan film, not only do I recommend Batman City of Scars, but also Street Fighter Assassins Fist, which is in my opinion is the best out there and was so good, Capcon themselves officially endorsed it and released it, it’s a prime example of how a fan film can become a proper work and is even better than any Street Film that has become before it.
Calvin – Nerd Consultant
Share This Post: