Where The Crawdads Sing – Review 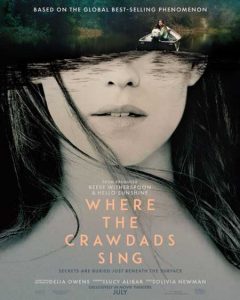 “WHERE THE CRAWDADS SING”

Where the Crawdads Sing is the latest film from director Olivia Newman, who previously did the straight to Netflix film; First Match (2018) and is based on the bestselling novel by controversial author Delia Owens. When they say bestselling, they really mean it! The book sold 12 million copies! I am not one of those 12 million, so I’m reviewing this as a film. One person who really did love this book was Reese Witherspoon, who immediately used her production company to turn it into a film and has a production credit.

The plotline centres around a young girl named Kya Clark (Daisy Edgar-Jones) who is known to the locals as ‘the marsh girl’ who is ostracised by her deep south town for her lifestyle of living off the land. She is later implicated in the murder of local quarterback, Chase Andrews (Harris Dickinson) and is later put on trial for his murder. Most of the film is flashbacks of her life and the events leading up to the court case, whilst being juxtaposed with the court proceedings. A large portion centres around her romances with both Chase and her first boyfriend Tate (Taylor John Smith).

I’ll say one thing immediately, this has to be one of the most horribly marketing movies I have seen all year. This film’s trailer made it out to be like this was a suspenseful murder mystery about prejudice. Those elements are here but this film feels more in tone with a romance novel you’d pick up in a WHSmith’s. I’ve heard comparisons to a film by the likes of Nicholas Sparks, and I think that that would be accurate.

I will however say some nice things about the film, it’s shot well and it has a great central performance by Daisy Edgar Jones. The downside is that the film’s narrative betrays that. I think that way too many people have been way too kind to this film, I thought that it was actually really bad. Let me just say that since it has a limited amount of time that the love triangle has to resort to what I would refer to as ‘Titanic love triangle’, (going back to a Lindsay Ellis video on the film Titanic). When you have a limited amount of time to tell a story with a love triangle, it often boils down not to ‘who will this person choose’ but ‘will they get away from the bad one’. And the film is not subtle about making Chase look like a bad guy.

It also didn’t help that some of the warnings for the 15 certificates in this film did give away elements of things that were going to happen in the movie. But trust me, if you don’t really like stereotypical love triangles, you won’t enjoy most of the second half of this film. The murder mystery was also something that was surprisingly pushed to the back, it doesn’t come up much in the flashback, and the film seems rather disinterested in the court case. Weirdly, the courtroom scenes are some of my favourite parts in the film! Probably due to the fact that I’ve watched and enjoyed a large amount of Law and Order and videos from the YouTube channel Legal Eagle, so I’m trying to spot all of the legal inaccuracies in the film. I’d have to see if a legal professional would make a video on this, but it all seems pretty accurate.

That’s not to say it’s historically accurate, though. Considering that it’s set in the deep south in 1969, it’s surprising that the locals are not depicted as being incredibly racist. A lot of this film takes place in the 1950’s, and granted, it’s not as if I desperately wanted that to be in the film, but I think when doing historical pieces like this that we need to be reminded of the abhorrent parts of our history so that we can spot its similarities to it today.

But what I really, really disliked about this film was that it was SO long, and yet it still felt half empty! It really is clear to me that this should have been a mini-series. It would have had more time to tell its story, especially considering that I expect large chunks of the book have been left out. There’s not a huge amount of character development in their place, either. I really didn’t enjoy that a lot. There’s lots of characters that disappear for large portions of the film , and many of them are not really set up to be suspects in the murder mystery because again, the film doesn’t seem to be interested in that!

But while I thought that this film wasn’t that great, the thing that pushed me over the edge of disliking it was the ending. The ending to this movie is really, really bad. And it contradicts many elements of the moral and message leading up to it! The ending really made me hate this. And it made me hate the film overall. It actually kind of made large amounts of the film pointless and it contradicts a lot of things that we were told during the film. If they wanted to go with this ending, they should have set up more to do with this particular plot point.

Where The Crawdads Sings is a noble effort and has some good performances, but it has a really ropey and boring middle section and an ending that destroys any goodwill that the film might have had. I truly dislike this film and I can’t recommend it. Again, I haven’t read the book so I don’t know if this is an accurate adaptation, but I suspect that it isn’t a good one.
Calvin – Nerd Consultant
Share This Post: