5 of My Unpopular Movie Opinions 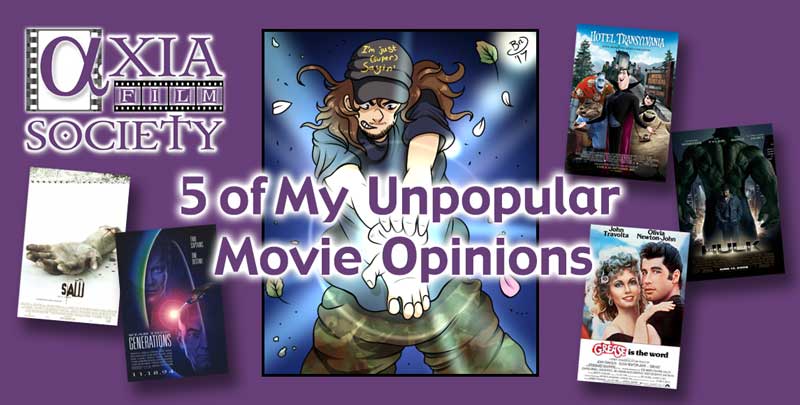 It’s fair to say that most of my reviews tend to line up with most of the critical opinion as well as the public opinion of films. However, everyone seems to have these really unpopular opinions that they don’t share with a lot of people. And I’ve often thought about making this list so honestly it was kind of good to come up with some. I actually had to dartball around a few of my opinions to see if people around me disagreed with them, and I was surprised I genuinely don’t have that many unpopular ones. However, I did find a few for this list.

So here’s 5—technically 6, which will get explained why later—unpopular movie opinions that I hold. I might do another one of these.

There seems to have been a rule with the Star Trek films pre reboot that all the odd-numbered films were the bad ones and all the even-numbered films were the good ones. And while I think that is true for most of the series, I’d say the exception to the rule is the 7th movie, Star Trek Generations. I think as a start-up for The Next Generation it works quite well: the cast is all pretty good and there are some excellent character moments, including some brilliant acting by Patrick Stewart. The only thing I don’t really like about Star Trek Generations is how it kind of reverses one of the few good things from Star Trek V. Spoiler alert for both Star Trek V and Generations (skip ahead to the next one if you don’t want to find that one out): basically, in Star Trek V, Captain Kirk is of the opinion that the villain’s ability to take away a person’s pain is actually something that shouldn’t happen because you need your pain to grow as a person and it’s no good hiding something where it’s best to overcome something. In Star Trek VII he just sort of confines himself to the ultimate reality of the Nexus; he’s basically just said, “Yeah, screw my regret; I might as well just live out here where I have a perfect life.” Admittedly he snaps out of it but it’s weird. And the whole plot point of the Nexus is a bit of a weird plot point to bring together Kirk and Picard, but as a whole I actually think Star Trek Generations works. I kind of like the villain, I think the plot is pretty cool all things considered, and if it’s guilty of anything it’s that it’s thematically a bit all over the place. But as a whole I think it works quite well. Side note: The other thing I would say—so if I do another one of these, I don’t have to go back to Star Trek again—is that Star Trek V is not the worst Star Trek film; Star Trek Insurrection is way worse for just how dull and annoying of a film it is. You can have that one for free.

This is something I’ve seen across all three movies and I’d say, with the exception of the third one which wasn’t very good, I really do not understand the hate for Hotel Transylvania or at least the sheer loathing it got from some critics. I’ve seen these films described as “rock bottom”. I’m sorry, I’ve seen Foodfight!; I’ve seen Rhapsody Street Kids: Believe in Santa—I’ve seen animation rock bottom and Hotel Transylvania is not there. The first two films are just nice family films, and I feel like most of the hate came from the fact the lead roles were taken up by Adam Sandler, Selena Gomez, Kevin James and David Spade. We’ve got such an instant predilection to not like these actors because of the films that they’ve been in previously, which I think is unfair—if these actors appear in a good film, I’m going to say it’s a good film. And I actually quite like the Hotel Transylvania films—they seem like a nice send-up to the Universal Monsters, all things considered. They even have some moments where they make fun of the fact that they’ve received a lot of fandom. So yeah, Hotel Transylvania films are not that bad and they do not deserve that level of hate.

Yeah, I’m going to go and say it: I really like the Saw movies. Yes, I know they’re plot-hole ridden; yes, I know they’re not high art. But as thrillers go they keep you on the edge of your seat and it does feel like the plot is at least somewhat thought-out. You get a sense that the writers and directors knew what the twists were going to be in the next film so they had to prepare for them in these films. Hell, there’s one twist that gets set up in the fourth movie and we don’t find out what it was until the sixth movie. And I can’t say hand on heart that I think most of the Saw films are bad films. The only ones I can say I think are bad and don’t really have much good in them at all are Saw: The Final Chapter and Jigsaw, the former of which had a really weird ending in the fact there seemed to be a lot more violence against women in the film than necessary in a borderline misogynistic way, and the latter for having one of the most predictable plot twists in the entire series which they even repeated from a previous film! And as a result, it’s an uninspired movie, but other than that I really like this franchise; I don’t get the level of hate for it. I know it did kind of bring about the whole torture-porn craze but I think the reason why we don’t like those films is because so many films did a terrible job imitating what Saw did. If you actually go back and watch some of those early films there’s actually way more happening in your mind than you actually see on screen most of the time, and most of the big torture-porn aspects of the films were more done by public demand. So yeah, it’s your own fault that this is where the horror films kind of went for a while.

Whenever I hear, “What is the weakest Marvel film?” there is always talk of Iron Man 2 and 3, or 4: The Dark World. But I don’t hear The Incredible Hulk get brought up and I think that’s the wrong decision—in my mind, The Incredible Hulk is the worst Marvel film. And it’s not just from the fact that in hindsight it’s utterly meaningless since, well, Edward Morton wouldn’t remain as Bruce Banner after Mark Ruffalo’s casting, but nothing really important happens in the film as is. It’s a rather bland and boring film and it’s incredibly forgettable. And here’s a challenge for you: tell me something you remember about the film, because really not much happens in it. It’s got one of the worst and most forgettable villains in any of the Marvel films, and the plotline might be a simple three-act structure but it doesn’t really have a lot of the heart or humour that the other Marvel films have had. And it just, to me, feels blander and more forgettable. Like, say what you like about the Iron Man sequels or the second Thor movie as they do have a lot technically wrong with them but they’re way more memorable than The Incredible Hulk is. And I saved the doozy for last…

I do not like Grease in any sense of the word: I don’t like the songs, I don’t like the plotline, I don’t like the pacing of the film. I think it’s a really boring film. And even if you ignore the fact that it’s really sexist in hindsight, it doesn’t change the fact that I find the film so, so boring. Yes, lots of people like Grease but it’s to me one of the dullest musicals ever made. ‘Summer Loving’ is lyrically terrible, and ‘Grease Lightning’ is genuinely terribly shot which is messing up some decent choreography. And really, despite the fact this is a musical, there are a lot of moments in this film where nothing is happening. And I hate the ending of the ending of the film; I genuinely find the ending despicable. Yes, Grease was a product of its time and you can make that defence all you want but art does not exist in a vacuum, and I can’t get over the fact I don’t like Grease. If you like the film that’s all well and good, but I can’t say I do.

That’s five of my unpopular opinions. Let me know if you have an argument against any of my opinions in the comments and let me know if you want to see more of these in the future.
Calvin – Nerd Consultant
Share This Post: