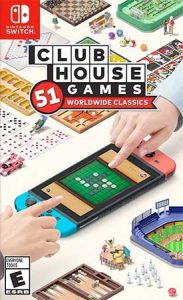 Named Clubhouse Games everwhere else, this is Nintendo’s published collection of 51 board, card and varriety games such as Darts, Blackjack, Shogi, Bowing, Hanafuda, Chess and many more. It’s basically a Switch answer to those fun get your friends together for a party game night and offers multiple options to play both on the couch, wireless play between Switches, and online multiplayer with both friends and random people. This got a lot of time devoted to it at the last Nintendo Direct Mini with it being Nintendo’s only major release in June (in fact it’s probably the only major Switch release in June) and I bought it out of curiosity more than anything else. This is essentially the Switches answer to Wii Sports and Wii Play both of which get updated versions of games from them in this collection. The game also uses a wide verity of controls such as using the switch’s touch screen features when playing the game in handheld mode for games like Ludo and connect 4 as well as motion controls using the joy cons for certain games like darts and bowling. For testing this game I initially worked on looking at the possibilities of what games you can play with only 1 switch. I was also able to test out online multiplayer but only against random people since none of my friends brought the game though I did also test out the app that lets you share the game to play multiplayer between switches where only one person requires the game, a real benefit if you want to play multiplayer card games. The game offers all 51 games from the start and in all honesty the games were surprisingly addictive even in single player though obliviously your mileage will vary depending on your enjoyment of the games on offer.

51 Worldwide Games is certainly a game that has merit with some excellent use of multiple switch functions but given that it’s on a system that already has great multiplayer games including Super Mario Party which could even have future entries or legacy content of the series in the future really means it’s got not as much staying power. This is mainly due to a badly implemented multiplayer system that relys on having friends with a switch or a switch online account and I can’t see people saying it would be their party game of choice. The games are certainly addictive and I had fun with the online multiplayer over the first few days of owning it but after that the novelty kind of wore off. it certainly has better online multiplayer than Super Mario Party but this isn’t going to be my go to party game. now the game’s online multiplayer has benefits right now but when we have a complete lockdown lift I can’t say that’ll still be the case.good game but not agreat game and not one I see a lot of people playing in a few months.

Right now it’s about £35 both physical copy and Digital copy but I’d say either wait for a sale or get it digitally once you know friends have a copy both during and post lockdown this game isn’t great for multiplayer with one switch.
Calvin – Nerd Consultant
Share This Post: