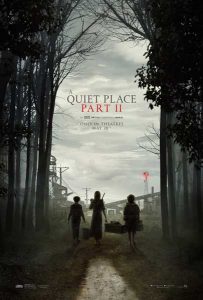 When A Quiet Place Part II was removed from the release schedule at the beginning of the pandemic, I had no idea that it would be around 15 months later until I would actually finally get to see it. But see it I have. However, we’re now living in very troubled times, so how is a film which essentially is about humanity collapsing going to go down with this current audience? The first thing to mention is this is entirely the same team that did A Quiet Place returning—John Krasinski returns to both writing and directing duties and pretty much the entire cast returns, and takes place immediately following the events of A Quiet Place. Therefore, I feel it’s necessary to be rather vague in this review since I don’t want to give away too much for people that haven’t seen the first one. But if you haven’t seen the first one, I really recommend it; it’s a very well-executed horror film. It’s the primary function of cinema: show don’t tell, with a very simple concept executed well.

As for this film, it does take place immediately following the last, however I had my apprehension about that. I’ve never looked at the ending of A Quiet Place and thought, ‘I really want to see how this story is going to continue,’ and I did review the first one and I don’t want to repeat myself too much. So, since I don’t really want to give spoilers away, I’ll just talk about the few things I can talk about. First off, Cillian Murphy is cast this time and he actually does a very good job; he certainly takes it a rather unorthodox style for the film that he’s in. Once again, because of course the whole point is that the monsters are basically blind but have excellent hearing, and if you make any sort of noise they’ll know exactly where you are and how to kill you, the film is mostly done through gestures and sign language. And all the good points of the first film are repeated here. The use of sound is excellent; every slight noise adds a level of tension. I don’t think I commented on it last time—this term gets thrown around way too much and I’m completely guilty of that—but A Quiet Place really feels Lovecraftian. There’s never a moment in either film where there’s not a sense of presence surrounding the characters. Nowhere feels safe and any sort of noise could be your death. If anything, this film coming out in a post-pandemic environment feels much more real. Remember how we all had to get used to the idea that just being near another person is potentially lethal? This film really emphasizes the idea that just making any sort of sound is lethal, and I think that means that these films now kind of resonate more.

The acting is once again fantastic and I actually think the music score had improved, though I think that might be because it feels like this film puts a little more emphasis on the score; there’s certainly more of it this time around. John Krasinski also isn’t kept to his comfort zone. The original film took place over just a few locations so they got to use the main set for most of the film. This time there’s a bigger budget so the advantage has become that there are more environments to explore, and the film really translates well to it. As a result, the idea of the film has proven it can translate, so I think there could be a lot more done in this film’s continuity with side stories. That being said, by the end, I was kind of thinking that I’m not sure I want any more of A Quiet Place, but not because I think there’s something wrong with this film. The only weakness I found was that it’s paced in a way that makes it feel a bit longer than it actually is when it’s actually not that long of a film. Neither of them are and neither overstayed their welcome, though there are a couple of moments where it felt like a sequence was being dragged out a little bit, and not just for the sense of creating tension. There’s a moment where we’re cutting between a bunch of environments and it feels like cuts are a little too fast, for example, so a lot of what’s going on doesn’t have time to sink in. But the main reason is that A Quiet Place Part II feels like it’s a complete ending. I’m not sure where a third one would go at this point. If anything, if A Quiet Place would continue, I think the idea of doing spin-offs taking place before the events of the film would be preferable.

The big question is though: is this the film to go and see in IMAX or even if you want to go back to the cinema? The answer is yes, this is the film! Rent A Quiet Place if you haven’t seen the first one already and then go see A Quiet Place Part II in cinemas because it’s really the kind of film you should see in a cinema experience, particularly if you live near an IMAX screening, not because this particularly has special effects and sequences that really demand being seen in IMAX but more because of the sound quality you get with IMAX. That surround sound effect will really make every moment feel important, and considering that this is a film that really relies on sound, that’s even more important. Oh, but finish your popcorn and your drink before the film actually starts because otherwise you will end up interrupting it for a lot of people if you don’t. Other than that, A Quiet Place Part II is fantastic. While I wouldn’t say the new features really revolutionize what is now becoming a series, it does feel like a good complimentary piece to the first film. The one thing that might turn a few people off is it’s a bit more action-heavy, but as a whole I think it works really well—you should see this one.
Calvin – Nerd Consultant
Share This Post: