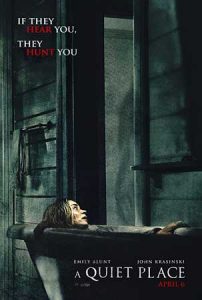 A quiet place is the directorial debut of John Krasinki who also co-wrote the story. The film is a very interesting concept which the trailers hooked me on, certainly more than the Death Wish re-make which also came out in the same week. The film towers itself as a very conceptual based horror film. It’s not as if the film is like The Witch, which is a film I enjoyed greatly from previous years, which also had a very minimalist cast, this one being extremely minimalist, having only five current cast members and very few extras.

Taking place, several months and eventually a year after the events of an apocalypse, the Abbott family of father and mother Lee and Evelyn, played by John Krasinski and Emily Blunt are having to keep themselves as quiet as possible from a menace that can only hear them at a distance, we don’t quite ever find out what they are. They could be Aliens, could be some unknown monster, as I said, the films never really explains. They had previously lost their son early into the apocalypse after he brought a loud toy along with him and have started to recover, knowing that they have to stay as quiet as possible to avoid the enemies which are blind. However the situation is changing now that Evelyn is pregnant and going to give birth any day.

A quiet place is probably one of the most ambitious horror films in recent memory – side note; do not go to see this in the cinema if you like cinema etiquette, you will hear every single thing in the audience. At my screening, for example, you could actually hear people whispering half way across the wall. What I also appreciated was that they didn’t use bullshit methods to pad out, to explain how they had been staying so quiet. They actually did come up with interesting ideas. For example, the family only walk on sand, which they have laid out (though where they are getting so much sand from is never explained) and the majority of the film is presented in sign language. This is due to the fact that the eldest daughter of the family is deaf so they have had to learn sign language to communicate with her. In fact, there are very few lines of actual spoken dialogue. The only scenes are when sound escape is impossible, such as being near a waterfall, where the sound of the fall would overtake it.

A quiet place is very similar to The Witch in one sense, the small cast, the secluded setting and the interesting concept. The difference is, with The Witch it is rather ambiguous since it is potentially all in the family’s head. This one spells out it’s antagonists and they are very difficult to describe. They are not exactly original looking, but they are not exactly stock either. They definitely look like something out of the Resident Evil games and I mean that in a good way. They kind of look like a mix between the lickers from Resident Evil and the monsters from Clover Field and the recent Godzilla re-boot. And, of course, as any good horror film does, we never really get a good look at them until towards the end. Here’s the problem, they actually get a weakness down the line and it is one so stupid that I could not believe that no one actually figured this out a while back.

That’s the biggest problem with A Quiet Place, they were nearly there. What I did appreciate about the film is that it doesn’t feel the need to add too many cast members, there are very few. The only one I actually recall from the film is one other person who just exists to be part of the body count. The thing certainly feels tense and has a ticking clock aspect to it, especially with the pregnancy angle, but it ultimately doesn’t really amount to much. It is kind of thought out, but the problem is, that should have been the climax of the film. The fact of the matter is though, it comes half way into the movie, which leaves the second half really kind of scrambling around for extra scares. Don’t get me wrong, I do appreciate a film with a slow horror pace, but the second half of the film felt like it was beginning to drag. It fortunately ends before it’s completely worn out, however, I’m not saying it’s entirely un-noticeable.

Now the film has an excellent cast. John Krasinski and Emily Blunt are once again in excellent form, Krasinski himself also having to be the director, to which adds an extra burden to him, both do an excellent job in their roles, which is rather weird considering the minimal dialogue they were given. It really shows how powerful the actors are considering how minimal they are given. If you are one of these people who insist that cast members actually have to represent the character, you are in luck since the eldest daughter is played by an actual deaf actress, in this case Millicent Simmonds, which is the second time she has been given a leading role playing a deaf character. The first time being Wonder Struck, which will be out later this year, which I was lucky enough to see at the London Film Festival. She delivers another excellent performance in this film and I would arguably say that she does better in this film, given that the script is a lot better. The other actors are also excellent. Noah Jupe, who you might recognise from the film Wonder also delivers an excellent performance in this film.

I also appreciate the film’s cinematography and sound editing. It must have taken a ton of effort to make the film look and feel the way it does. If there is one thing that bothers me about it though, it’s the lighting. On some occasions I think the lighting is a bit too dark, in the sense of ‘it’s alright to feel some dread, but I need to be able to see something’!! Also, there is a scene in a grain silo later on in the film, which kind of made me think that the laws of Physics had taken a day off. Doesn’t really do anything to talk me out of the film, I actually think A Quiet Place is a great horror film with very minimalist scares and a brilliant script with some brilliant performances. It does tend to drag in its second half, but it ultimately delivers a film that is very worth a watch and I think I am actually going to watch it to see some of the subtle moments that seemed to be in the film.

What you will also be amazed to find out is that this film is produced by Michael Bay, though judging by his position in the credits and the overall tone of the film, I suspect his role was minimal and financial.

Well, that’s another one down and another excellent film that I have reviewed. Feels like the year is starting to pick up. Let’s see if it keeps it up because next week I will be reviewing the video game adaptation Rampage, which I am sure someone was asking for.

Thanks a lot for reading my review. I hope you have enjoyed reading it as much as I have enjoyed writing it and shhhhhhhh.
Calvin – Nerd Consultant
Share This Post: