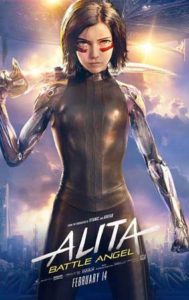 Alita: Battle Angel is very much a project that’s been in development hell. Cameron has been talking about this film for nearly two decades and he has been wanting to make it for quite some time. Silent Studios really don’t give a crap about making adaptations like this but its also a proof of Camerons influence, especially considering the recent success of the Avatar franchise.

The film is based on a manga by Yukito Kishiro, which was incredibly popular in Japan but its influence was not largely extended internationally. It had its fans, but it’s more got a cult following than anything else.

It’s not surprising then that the studio seemed very unconfident in this. I’ve been preparing to review this film several times, it’s been pushed back in the release calendar so much, which is a sign the studio didn’t have much confidence considering how it’s been done.

Cameron had intended to direct Alita, but unfortunately his plans stood in the way of that. He is though still in the project as producer, though he has a screenplay credit alongside Laeta Kalogridis, who was a script writer on Shutter Island, as well as the man who would end up directing it, Robert Rodriguez.

Now I’m a fan of Rodriguez for the most part. He has directed some really good films and TV, a few poor choices not with standing. Considering his work on Sin City and adapting that work, he seems like a decent choice to direct this film. Given that there is about to be a load of adaptations like this, and given that Ghost in the Shell that I previously reviewed tanked at the Box Office, has it really stood out to a more critical audience.

The film starts with Dr Dyson Ido, played by Christop Waltz, looking through a scrap heap from the floating city above him, only to find a cyborg named Alita, played by Rosa Salazar, who he repaired. Little does she know that at night he goes out working as a bounty hunter, and she wished to take part in the role in order to pay him pack and not face the burden. However, it soon becomes clear that she has a bit of a past to deal with as well as several people after her. That is a really, really, really watered down version of the story. Alitas plot is actually incredibly complicated. There is all sorts of mythology that they had to work in.

The film takes place in 2563 after an event known as The Fall, a war that supposedly wiped out most of the floating cities, with only this one remaining. There is also a lot of other factors, such as how the law works in this world and various aspects of the inner workings of the politics. It fortunately is all easily explained to the audience so people won’t feel lost, however, it does risk being very expedition heavy. Alita does not fall out of a trap. There is quite a few things that also are hinted at but never fully realised. For example: they make reference to Mars and its role in the plot, but that’s not really touched upon outside of that statement.

Lets talk about Alitas biggest positives. For a start the performances are all great, this is a great cast, including great performances from: Christoph Waltz, Jennifer Connelly, Mahershala Ali (who I personally think is incapable of giving a bad performance), Ed Skrein (who once again plays a great villain), Jackie Earle Haley, Keean Johnson, it is an excellent cast. The top prize however goes to Rosa Salazar, who does an excellent motion capture performance. I was a bit worried about them trying to replicate the style of the manga to heavily when I saw the first trailer since she does transfer from the uncanny value, but it’s thematically kind of important to show how different she really is.

First off, as someone who has actually read some of the manga prior to seeing the film, its amazing how accurate this film is to its source material. James Cameron and Robert Rodriguez have really gone out of their way to make this feel like that story has come to life. The special effects really support that well. You can tell that this was a passion project given just how well they do it. There is all sort of subtle little things they put in place. Such as the design of Ido’s hammer, aswell as smaller things in the costume department, all sort of references are there with an eye from the source material.

The special effects also really shine here. This is some of the best motion capture I have seen since Tin-Tin. It is not only very creative designs that reflect the source material very well, but also allows for really expressive movements and faces. I’ve often complained in the past about films that over rely on computer generated effects and digital effects, but this is a film that really uses them to its full advantage.

Now we come to the negatives. As I stated this film is very close to the source material. However, that’s just the problem. This was a very, very, very long source material and because they are trying to stick so close to the story, it means the can’t go off and do their own thing, which means this film now has to become a franchise and have a sequel. It definitely suffers from the biggest issue which I have with a lot of films these days, which is that it is preparing the sequel before it has got the first film done. There has not been a second film anoounced at this time, and it took very long for just this film to get made. I suspect this film will do poorly at the Box Office, though I’m hoping I am wrong on that.

Ok, while we are on the topic of negative points. I don’t exactly have a problem with James Cameron, I think when he’s actually good he does some great work. The one thing he has never been good at is dialogue. You can really feel that he’s had most of the writing credits in this film. It is deffinatley a Cameron script and has got some hokey dialogue in there. This is not an example of the keeping to the source material, you can definitely feel Camerons presents here. It feels rather like his other work, the dialogue will be recognised by anyone who has seen his other films such as: Avatar and Titanic. Much like those films it becomes evident that Cameron is much better at writing women rather than men. This was a point that first became apparent to me through one of Matthew Bucks reviews. It is definitely present here since he writes the women as rather well dimensioned characters, with very clear motivations and goals. But, the men come off as rather bland and uninteresting, usually in an unintentional way.

Another problem with Alita is that I think it will be a pretty exhausting watch for a lot of people. It is a very long film with a lot to take in and memorise. Fortunately its pacing issue really is only at the begginign, it kind of fixes itself towards the end.

There is also another negative factor, with how it treats one of its characters. There is a character moment that happens, which is rather interesting, only for that moment to be undone by another choice made towards the end of the film, which meant that several previous moments felt pointless.

Mahershala Ali is wasted in his role. He really delivers where he is given a chance to do so, but his character is rather underwhelming. Now he would have made an excellent choice to play the main villain, but he is actually more of an underlay to the other villain. Who by the way has one of the most ridiculous villain designs I have ever seen. He looks like Dr Insano.

One thing I can’t fault Alita on is the action scenes. This film is brilliant when it comes to its action sequences. Not surprising given who the producer and director are. It really understands how to do action scenes and it fundamentally gets them all right. Some of the real highlights include the motor ball sequence, the fictional sport which takes place in this world. As well as the bar fight amongst a bunch of bounty hunters.

Alita is a film that I like, but it also has some flaws which I think will make it unpalatable to a general audience and kill any potential sequels in the future. Though this film is definitely a pro example of how to translate a source material well to a film screen. The dialogue is a bit hokey and the film often feels as though it is trying a bit too hard, but overall I found more positives than negatives.

Now take this with a pinch of salt as I am not a fan of Avatar, but I personally think this is better than Avatar and I will stand by that. I didn’t see the film in 3D but I have heard tonnes of reports that this film is really good in 3D. My cousin saw the 3D version and she said it is the best 3D effect she has seen. So if you do get the chance to go to the cinema and see it, I recommend you find a 3D screening if you can. This is especially great considering there is not to many dark environments that will scewer the 3D effect. The characters are also very bright and do stand out in the darker environments.

Well that’s it for me this week, next week I will be going to see a horror film again, as I review Happy Death Day to You, the sequel to Happy Death Day. Word of warning in advance, that review will contain spoilers of the first film, so make sure you see the first one prior to reading the review.